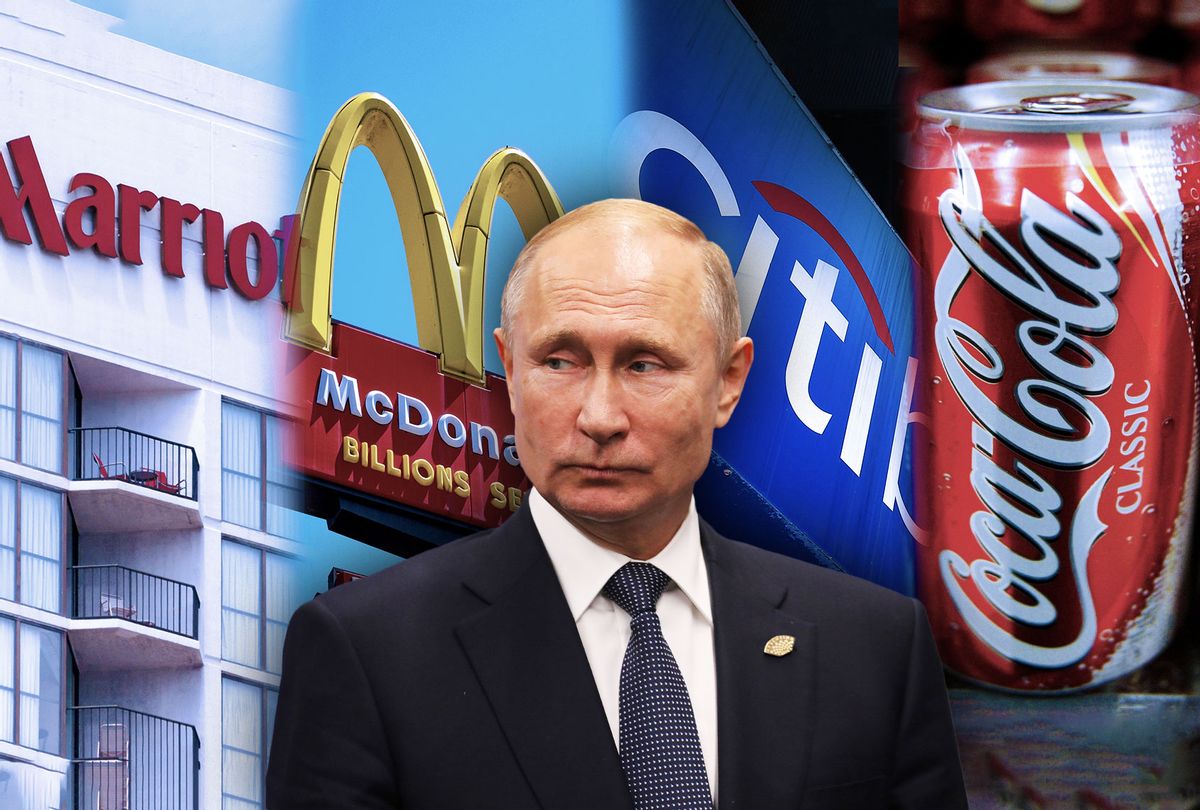 Over the past two weeks, hundreds of major corporations with substantial ties to Russia have withdrawn from the country amid its devastating invasion of Ukraine. The mass exodus is a marked departure from what is generally Corporate America’s tepid response to calls for divestment on the basis of human rights matters.

From Credit Suisse and BP to UPS and Activision Blizzard, companies all across the industrial spectrum have halted Russian exports and capital investments, a move that follows suit with the rash of stiff US sanctions imposed on the country’s energy and financial sectors. Others like Adidas, Coca-Cola, and Mcdonald’s have shuttered hundreds of Russia-based offices, stores, and manufacturing plants despite what will likely amount to billions of dollars in financial losses.

But even in the face of immense public pressure, dozens of prominent companies still enmeshed in Russia’s economy have opted to ride out the public relations storm, according to an expansive public list compiled by Jeffrey Sonnenfeld, a professor at the Yale School of Management.

Notable among them are major hotel and resort chains like Marriott, Hilton, Hyatt, and Accor, as well as food chains and manufacturers such as Nestlé, Cargill, Mars, and Papa John’s. Other examples include pharmaceutical company AbbVie, Bridgestone Tire, Ferragamo, Dow Chemical Company, John Deere, and cigarette maker Philip Morris.

RELATED: Surging prices and wheat shortages: How the invasion of Ukraine is impacting global food supplies

Hilton, for instance, operates at least 29 hotels in cities like Saint Petersburg, Moscow, and Volgograd, according to the company’s website. “Russia has been one of our main focus markets for several years,” as Phil Cordell, global head of focused service brands for Hilton, told Hotel Management in 2016. “In 2008, we opened our first two hotels, with six more by 2014 “In the first half of 2016, Hilton became the leading international brand to open hotels in the Russian market.”

Hyatt, one of Hilton’s largest competitors, operates six locations in Russia. Asked about the company’s operations there, a company representative directed Salon to a Wednesday statement in which the company announced that it would immediately “suspend [its] development activities and any new investments in Russia. “

“We will continue to evaluate hotel operations in Russia, while complying with applicable sanctions and US government directives as we hope for a resolution to this crisis,” the company added, suggesting that the status quo will remain unchanged for its current locations in Russia.

Want a daily wrap-up of all the news and commentary Salon has to offer? Subscribe to our morning newsletter, Crash Course.

Phillip Morris, whose stock tumbled by 10% immediately after the invasion, has struck a similar pose, promising “the suspension of its planned investments in the Russian Federation, including all new product launches and commercial, innovation, and manufacturing investments.” The company has also vowed to “scale down its [present] manufacturing operations “in Russia. But Phillip Morris company proffered no specifics or timeframe on the rollback. According to Seeking Alpha, Russian consumers accounted for 8.4% of the company’s cigarette shipments and over 17.1% of its heated tobacco units volume in 2021.

At the same time, many multinationals have gone above and beyond expectations in extricating themselves from the Russian economy, despite the prospect of steep financial losses.

American Express, Mastercard and Visa have completely suspended their services in the country, rendering any of their cards that were issued by Russian banks unusable. Deloitte, EY, KPMG and PwC – collectively known as the Big Four accounting firms – have all announced plans to shut down from Russia-based offices. Food and drink companies like McDonald’s and Starbucks have closed all of their stores in Russia, a move that will effectively end operations for hundreds of locations.

RELATED: Corporate America is backing away from Georgia’s anti-voting bill – after funding its sponsors

“If you go back to the Georgia voter law, if you go back to George Floyd… there was no government leadership. Companies had to speak out, despite what governments were not doing or saying,” Johndrow said. But now, he added, “governments are stepping forward in unison to act on this. So companies are [back in] their normal role, which is to follow suit on those things, rather than have to take a lead on it. “

For the most part, it appears that companies have taken cues from the recent rollout of multilateral sanctions against Russia, including those imposed by the US

Earlier this month, the Treasury Department sanctioned Putin and eleven top government officials as well as a number of Russian oligarchs. The Biden administration also placed sanctions on the country’s Central Bank and prohibited Russian imports of oil, natural gas, and coal.

While the US government regularly uses sanctions as a first line of defense to prevent international conflicts from afar, Johndrow said, the speed and depth of Biden’s recent sanctions shocked a lot of US business leaders.

“What everyone expected… was a gradual escalation of sanctions. And the fact that so many [sanctions] came online so quickly really, really shocked them, “Johndrow said.” It’s the speed with which the usually-slow-moving decision-making bureaucracies… [are] moving much faster than companies have ever seen before. “

Over the past several decades, Corporate America has been increasingly expected to weigh in on issues of justice, with minority rights in the US under constant threat from Republican-led districts, cities and states. But in recent years, critics argue, the private sector’s contributions have been symbolic gestures amounting to little more than window dressing.

Back in 2020, at the height of the George Floyd protests, for instance, fifty of America’s largest corporations committed around $ 50 billion to address racial inequality, according to The Washington Post. While many of these companies delivered strong condemnations of racism at the time, Salon reported that many were repeat donors to police foundations, which allow police departments to raise slush funds for off-the-books initiatives that have a history of “enabling state-sanctioned violence against Black communities and communities of color, “as a Color of Change report noted. Even Corporate America’s $ 50 billion pledge was, according to the Post, mostly “allocated as loans or investments they could stand to profit from.” Roughly 0.14% of the money actually went to criminal justice reform groups.

RELATED: As big corporations strike a pose for racial justice, they keep on funding the police

Still, Corporate America’s unprecedented response to the Russian invasion might indicate that big businesses are willing to reexamine their role in mitigating domestic and global conflicts, particularly when they are under both public and governmental pressure.

According to a Morning Consult poll from last month, roughly 75% of Americans support the private sector’s severance from Russia. Nearly four in ten believe that businesses should permanently cut ties with the country.

“The early movers moved with action instead of platitudes. And they were some of the less likely sectors to start first,” he said in an interview.

However, the circumstances under which Corporate America resumes its operations in Russia remain unclear. And many businesses are worried about the prospect of reentry, Sonnenfeld said, noting a recent conversation he had with six well-known CEOs who mostly stood by their decision to withdraw.

“Part of the reason that [businesses] stay is they’re afraid of just that the reentry will be hard, because there’ll be residual ill will – that they’ll be portrayed as anti-Russian to a general population, “he added.” But I think that’s naive because if Putin or his successors succeed in the legacy of resentment in the general public, it’s going to be generalized to all Western companies, and it will not matter if you pulled out or not. “