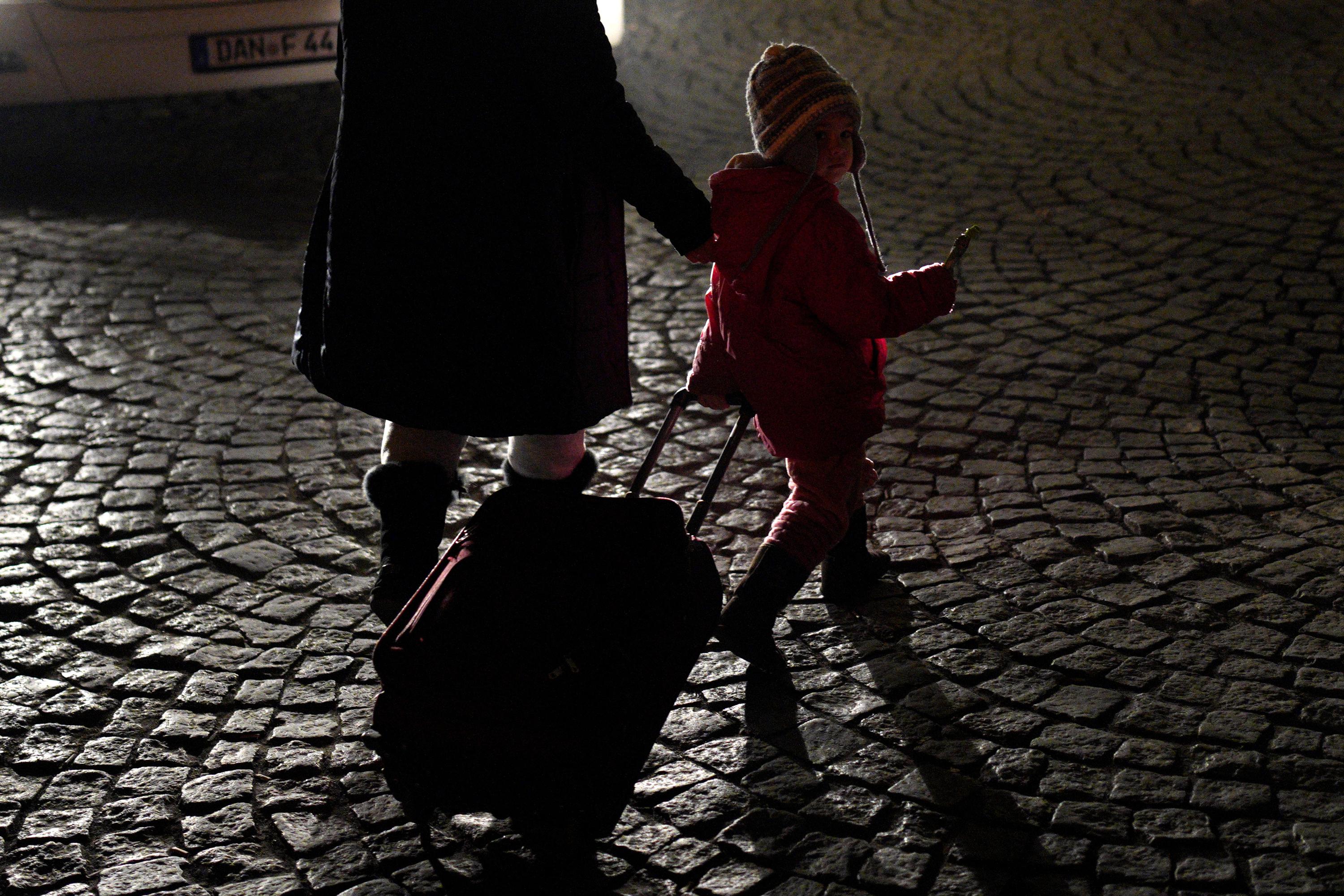 The latest developments on the Russia-Ukraine war:

TEL AVIV, Israel – Israel’s foreign minister is condemning Russia’s invasion of Ukraine, calling on Moscow to halt its attacks and end the conflict.

Yair Lapid’s criticism Sunday is among the strongest that has come from Israeli officials since the war began. His remarks set him apart from Israeli Prime Minister Naftali Bennett, who has stopped short of condemning Russia.

Israel has walked a fine line in its response to the crisis. Bennett has voiced support for the Ukrainian people and the country has sent humanitarian aid to Ukraine. But Israel relies on Russia for security coordination in Syria, where Russia has a military presence and where Israeli aircraft have frequently struck enemy targets over recent years. Bennett has been attempting to mediate between the Kremlin and Ukraine.

Lapid made his remarks in Bucharest, Romania, where he met his Romanian counterpart.

LVIV, Ukraine – The office of Ukraine’s Prosecutor General says a total of 85 children have been killed since the start of the Russian offensive in Ukraine.

More than 100 more have been wounded, the office said. Officials also said that bombings and shelling have damaged 369 educational facilities in the country, 57 of which have been completely destroyed.

LVIV, Ukraine – At least nine people were killed and 57 wounded when a Russian airstrike hit a military training base in western Ukraine close to the Polish border, a local official said Sunday.

The governor of the Lviv region, Maksym Kozytskyi, said Russian forces fired more than 30 cruise missiles at the Yavoriv military range, located 30 kilometers (19 miles) northwest of the city of Lviv and 35 kilometers (22 miles) from Ukraine’s border with Poland .

The assault brought the war closer to the border with Poland. A senior Russian diplomat has warned that Moscow considered foreign shipments of military equipment to Ukraine “legitimate targets.”

The United States and NATO have regularly sent instructors to the range, also known as the International Peacekeeping and Security Center, to train Ukrainian military personnel. The facility has also hosted international NATO drills.

Russian fighters also fired at the airport in Ivano-Frankivsk, a city in western Ukraine located 250 kilometers (155.34 miles) from Ukraine’s border with Slovakia and Hungary.

SUCEAVA, Romania – A widow fleeing the war in Ukraine with her teenage son has described the harrowing scenes they witnessed during their days-long journey from their bombed hometown of Chernihiv in northern Ukraine.

The 44-year-old Elena Yurchuk worked as a nurse at a local hospital she says no longer exists. She says, “Our city is under siege and we barely escaped.”

She says, “People in cars are blown up by mines, a car with children and a young family was blown up… literally behind us.”

Yurchuk described Chernihiv as a “ghost town” with no electricity when they left. After reaching Suceava in northern Romania, she’s unsure where they’ll go next. They have earmarked Germany as a final destination, where she hopes to find work caring for the elderly.

She says, “I do not know the language, it will be difficult for me.” She added that a lot of refugees have already arrived, saying, “I understand that no one needs us. ”

She says her house was in the center next to a hotel that was bombed in an airstrike, adding, “I do not know if I have a home or not.”

ROME – Italian state radio says a bus carrying about 50 refugees from Ukraine has overturned on a major highway in northern Italy, killing a passenger and injuring several others, none of them seriously.

RAI radio said one woman died and the rest of those aboard the bus were safely evacuated after the accident early Sunday near the town of Forli ‘. It was not immediately clear where the bus was headed.

Some 35,000 Ukrainians refugees who fled the war have entered Italy, most of them through its northeastern border with Slovenia. Forli ‘is in the region of Emilia-Romagna, which borders the Adriatic Sea and which so far has taken in some 7,000 refugees.

The accident is under investigation.

LVIV, Ukraine – Russian forces carried out an air strike on a military range near Lviv in western Ukraine, expanding its offensive closer to the border with Poland.

The Russian military on Sunday morning fired eight rockets at the Yavoriv military range 30 kilometers northwest of Lviv, the Lviv regional administration said, without offering any details about possible casualties.

The Yavoriv military range, also known as the Yavoriv International Peacekeeping and Security Center, is located 35 kilometers from Ukraine’s border with Poland.

Since 2015, the US has regularly sent instructors to the Ukraine military range to train Ukraine’s military. The range has also hosted international NATO drills.

LVIV, Ukraine – Russia is trying to create new “pseudo-republics” in Ukraine to break his country apart, President Volodymyr Zelenskyy said in his nightly address to the nation Saturday.

Zelenskyy called on Ukraine’s regions, including Kherson, which was captured by Russian forces, not to repeat the experience of Donetsk and Luhansk. Pro-Russian separatists began fighting Ukrainian forces in those eastern regions in 2014.

“The occupiers on the territory of the Kherson region are trying to repeat the sad experience of the formation of pseudo-republics,” Zelenskyy said. “They are blackmailing local leaders, putting pressure on deputies, looking for someone to bribe.”

City council members in Kherson, a southern city of 290,000, on Saturday rejected plans for a new pseudo-republic, Zelenskyy said.

Ukraine will stand this test. We need time and strength to break the war machine that has come to our country, ”Zelenskyy said.

ZAHONY, Hungary – Klara Uliganich is returning home to Ukraine after spending nearly three weeks in Hungary as a refugee.

The pensioner says she will go back to her home in Uzhhorod, a city in western Ukraine.

“I got a feeling, it’s hard to put it into words,” she said of her decision while waiting at the railway station in the Hungarian border town of Zahony. “I was born there, that’s my home.”

Her family did not want her to return, but she said she was determined to go back.

“I can not live my life shaking in fear just because the Russians are coming,” she said. “If they come, I’ll be a refugee again, that’s it.”

Hungary, a country of around 10 million people, has taken in around 235,000 refugees from Ukraine as of Saturday, the second-highest number of any other country after Poland, which has received more than 1.5 million refugees.

KYIV, Ukraine – Seven Ukrainian civilians, including a child, died when Russia shelled a humanitarian convoy of refugees and forced them to turn back, Ukraine’s Ministry of Defense said.

The seven were among hundreds of people who tried to flee the village of Peremoha, 20 kilometers (12 miles) northeast of Kyiv. An unknown number of people were wounded in the shelling, the report added.

Moscow has said it would establish humanitarian corridors out of conflict zones, but Ukrainian officials have accused Russia of disrupting those paths and firing on civilians.

On Saturday, Ukraine’s Deputy Prime Minister Iryna Vereshchuk said just nine of 14 agreed-upon corridors were open on Saturday, and that about 13,000 people were evacuated on them around the country.

At least 2.5 million people have fled Ukraine since the Russian invasion 17 days ago, according to the United Nations Refugee Agency.

WARSAW, Poland – Yulia Kalachemkov is staying at a refugee center in Warsaw with her children. They are among the people fleeing Ukraine, which the United Nations refugee agency says numbers at least 2.5 million.

Her young daughter has epilepsy and her 11-year-old autistic son Nikita is recovering from an operation on his feet that were deformed at birth.

She said it was a struggle to flee her home country and get to Poland’s capital.

“It was just so hard trying to hold my children’s hands in case they fell and try to carry the luggage,” Kalachemkov told Sky News.

At a nearby bus station, a Ukrainian woman who fled her home in Kyiv briefly crossed paths with her parents, who were heading back into Ukraine after a vacation in Cuba.

“It’s the most horrible thing,” said Katarina, identified only by her first name in Sky News video. “Anything could happen. It could be the last time I see my parents. ”

Sergiy Stakhovsky is a recently retired professional tennis player from Ukraine who has left his wife and three young children at home in Hungary to go back to his birthplace to help how he can during Russia’s invasion.

Stakhovsky said in a video interview with the AP that he would never have imagined he would be in his home city with a gun in his hands.

He earned more than $ 5 million in prize money in tennis and upset Roger Federer at Wimbledon in 2013. Stakhovsky’s last match came in Australian Open qualifying in January.

Russia began attacking Ukraine on Feb. 24, and a few days later, he arrived in Kyiv.

MEDYKA, Poland – About 60 child cancer patients from Ukraine boarded a medical train in a Polish town Saturday, bound for hospitals in Warsaw and elsewhere.

Medical workers carried some young patients in their arms, on stretchers and in a wheelchair at a station in Medyka, near the Ukrainian border.

“Some of them will require oxygen, will require some form of intensive care,” and some have COVID-19 and have to be kept separate from others, “said Dominik Daszuta, an anesthesiologist from Warsaw Hospital. He said the train has transported 120 children with cancer so far.

The United Nations refugee agency says at least 2.5 million people have fled Ukraine in the two weeks since Russia invaded it.