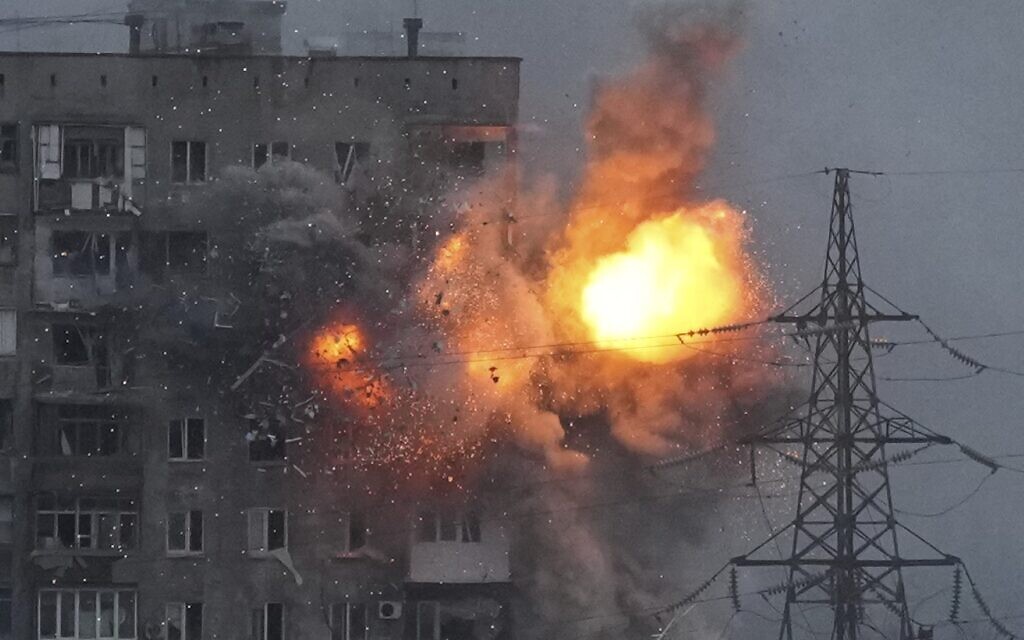 Ukrainian President Volodymyr Zelensky said on Saturday that Russia, which invaded his country on February 24, had adopted a “fundamentally different approach” in talks to end the conflict.

In a media briefing, Zelensky said that the approach was in contrast to earlier talks at which Moscow only “issued ultimatums” and that he was “happy to have a signal from Russia” after Russian President Vladimir Putin said he saw “some positive shifts” in their dialogue.

Putin previously indicated that negotiations are “now being held on an almost daily basis.”

Russian and Ukrainian negotiators have held several rounds of talks since Putin sent troops to the country.

Turkey on Thursday hosted the first talks between the Russian and Ukrainian foreign ministers since the invasion.

The talks have led to the opening of several humanitarian corridors to evacuate civilians from combat areas. Both sides have accused each other of blocking these efforts.

Zelensky said around 1,300 Ukrainian troops had been killed since Russia invaded its pro-Western neighbor. 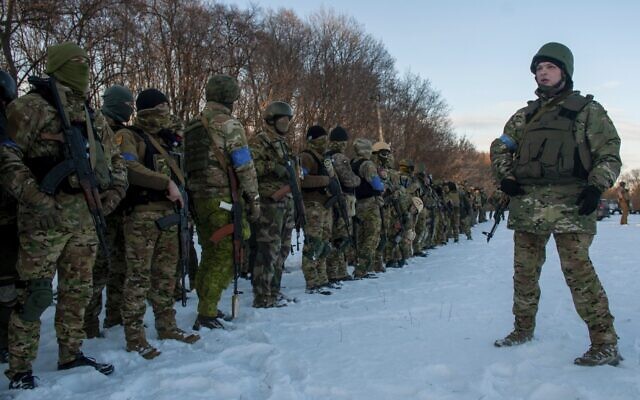 It was the first time Kyiv had given such a toll since the beginning of fighting. On March 2, Russia said it had lost nearly 500 soldiers, but has not updated the figure since.

The Ukrainian president claimed that Russia had lost “around 12,000 men.”

It’s “a ratio of one to ten, but that does not make me happy,” he said.

The Russian army has committed around 150,000 soldiers to the invasion of Ukraine.

Russian forces upped the pressure on Kyiv Saturday, pummelling civilian areas in other Ukrainian cities, amid fresh efforts to get aid to the devastated port city of Mariupol.

Russian strikes destroyed the airport in the town of Vasylkiv on Saturday morning, about 40 kilometers (25 miles) south of Kyiv, while an oil depot was also hit and caught fire, the mayor said. 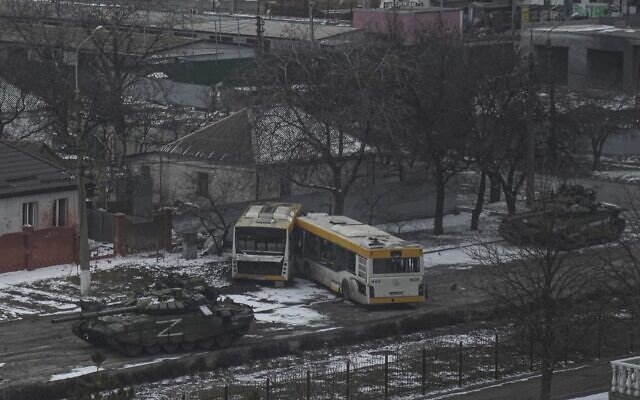 Russian army tanks move down a street on the outskirts of Mariupol, Ukraine, on Friday, March 11, 2022. (AP Photo / Evgeniy Maloletka)

The northwest suburbs of the capital, including Irpin and Bucha, have already endured days of heavy bombardment while Russian armored vehicles are advancing on the northeastern edge.

The Ukrainian government said Russian forces pounding the port city of Mariupol shelled a mosque that was sheltering more than 80 people, including children.

There was no immediate word of casualties from the shelling of Mariupol’s elegant, city-center mosque. The encircled city of 446,000 people has endured some of Ukraine’s worst misery since Russia invaded, with unceasing barrages thwarting repeated attempts to bring in food, water, and medicine, evacuate trapped civilians, and even bury the dead. 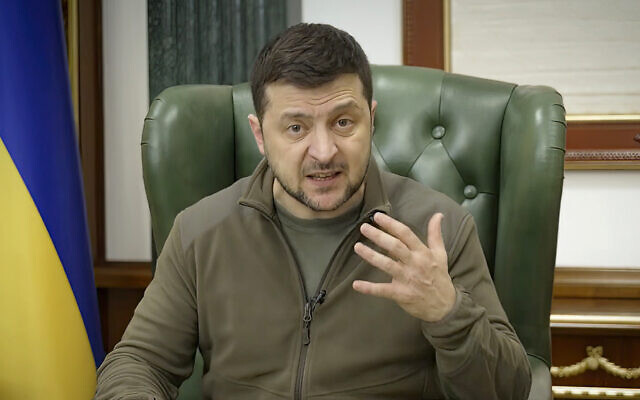 An Associated Press journalist in Mariupol witnessed tanks firing on a nine-story apartment building and was with a group of hospital workers who came under sniper fire on Friday. A worker shot in the hip survived, but conditions in the hospital were deteriorating: electricity was reserved for operating tables, and people with nowhere else to go lined the hallways.

Among them was Anastasiya Erashova, who wept and trembled as she held a sleeping child. The shelling had just killed her other child as well as her brother’s child, Erashova said, her scalp crusted with blood.

“We came to my brother’s [place], all of us together. The women and children went underground, and then some mortar struck that building, ”she said. “We were trapped underground, and two children died. No one was able to save them. ”

Meanwhile, French and German leaders spoke Saturday with Putin in a failed attempt to reach a cease-fire. According to the Kremlin, Putin laid out terms for ending the war, including Ukraine’s demilitarization and its ceding of territory, among other demands.

Ukraine’s military said Saturday that Russian forces captured Mariupol’s eastern outskirts, tightening the armed squeeze on the strategic port. Taking Mariupol and other ports on the Azov Sea could allow Russia to establish a land corridor to Crimea, which it seized from Ukraine in 2014. 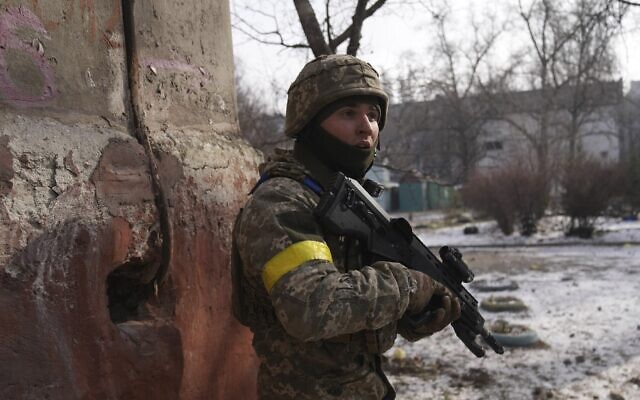 Zelensky encouraged his people to keep up their resistance, which many analysts said has prevented the rapid offensive and military victory the Kremlin likely expected while planning to invade Russia’s ex-Soviet neighbor.

“The fact that the whole Ukrainian people resist these invaders has already gone down in history, but we do not have the right to let up our defense, no matter how difficult it may be for us,” he said. Later Saturday, Zelensky reported that 1,300 Ukrainian soldiers have died in fighting since the February 24 start of the Russian invasion.

Zelensky also accused Russia of employing “a new stage of terror” with the alleged kidnapping of the mayor of Melitopol, a city 192 kilometers (119 miles) west of Mariupol. After residents of the occupied city demonstrated for the mayor’s release Saturday, the Ukrainian leader called on Russian forces to heed the calls.

“Please hear in Moscow!” Zelensky said. “Another protest against Russian troops, against attempts to bring the city to its knees.”

In multiple areas around the capital, artillery barrages sent residents scurrying for shelter as air raid sirens wailed. Britain’s Defense Ministry said Russian ground forces that had been massed north of Kyiv for most of the war had edged to within 25 kilometers (15 miles) of the city center and spread out, likely to support an attempted encirclement.

As artillery pounded Kyiv’s northwestern outskirts, black and white columns of smoke rose southwest of the capital after a strike on an ammunition depot in the town of Vasylkiv caused hundreds of small explosions. A frozen food warehouse just outside the capital also was struck in an apparent effort to target Kyiv’s food supply. 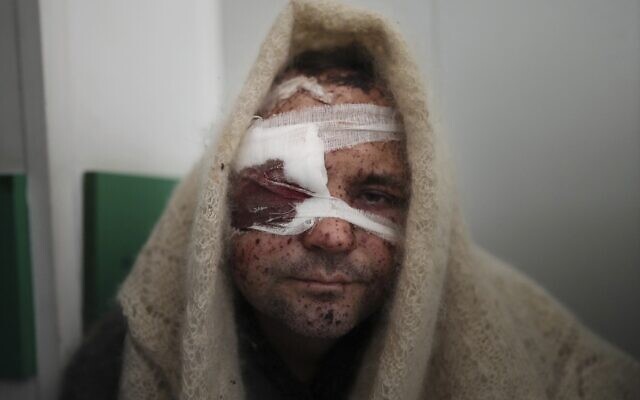 Serhiy Kralya, 41, looks at the camera after surgery at a hospital in Mariupol, eastern Ukraine, on Friday, March 11, 2022. Kralya was injured during shelling by Russian forces. (AP Photo / Evgeniy Maloletka)

Ukraine’s military and volunteer forces have been preparing for an all-out assault. Kyiv Mayor Vitali Klitschko said Thursday that about 2 million people, half the metropolitan area’s inhabitants, had left and that “every street, every house… is being fortified.”

Zelensky said Saturday that Russia would need to carpet-bomb the Ukrainian capital and kill its residents to take the city.

“They will come here only if they kill us all,” he said. “If that is their goal, let them come.”

Putin held a 90-minute call with French President Emmanuel Macron and German Chancellor Olaf Scholz on Saturday. Putin spoke about “issues related to agreements under discussion to implement the Russian demands” for ending the war, the Kremlin said without providing details. 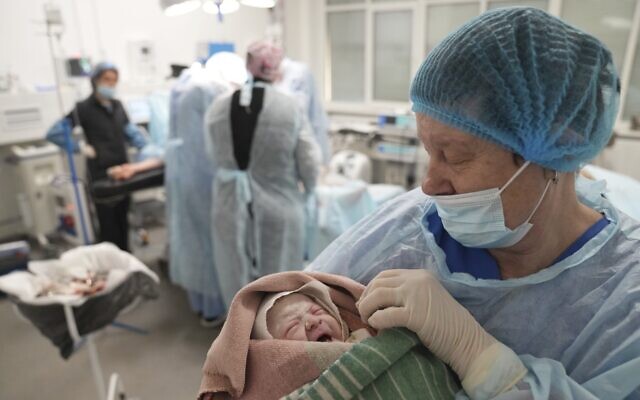 A medical worker holds a newborn girl, Alana, after a cesarian section in a hospital in Mariupol, Ukraine, on Friday, March 11, 2022. Alana’s mother had to be evacuated from another maternity hospital and lost some of her toes after it was shelled . (AP Photo / Evgeniy Maloletka)

For ending hostilities, Moscow has demanded that Ukraine drop its bid to join NATO and adopt a neutral status; acknowledge the Russian sovereignty over Crimea, which it annexed from Ukraine in 2014; recognize the independence of separatist regions in the country’s east; and agree to demilitarize.

Russia’s slow tightening of a noose around Kyiv and the bombardment of other cities mirror tactics that Russian forces have previously used in other campaigns, notably in Syria and Chechnya, to crush armed resistance.

The Ukrainian Embassy in Turkey said 86 Turkish nationals, including 34 children, were among the people who had sought safety in Mariupol’s mosque of Sultan Suleiman the Magnificent and his wife Roksolana, which was modeled on one of the most famous and largest mosques in Istanbul.

Before Mariupol became a target of the biggest land conflict in Europe since World War II, the city promoted the white-walled building and its towering minaret as a scenic attraction. The death toll in Mariupol passed 1,500 on Friday, from 12 days of attack, the mayor’s office said.