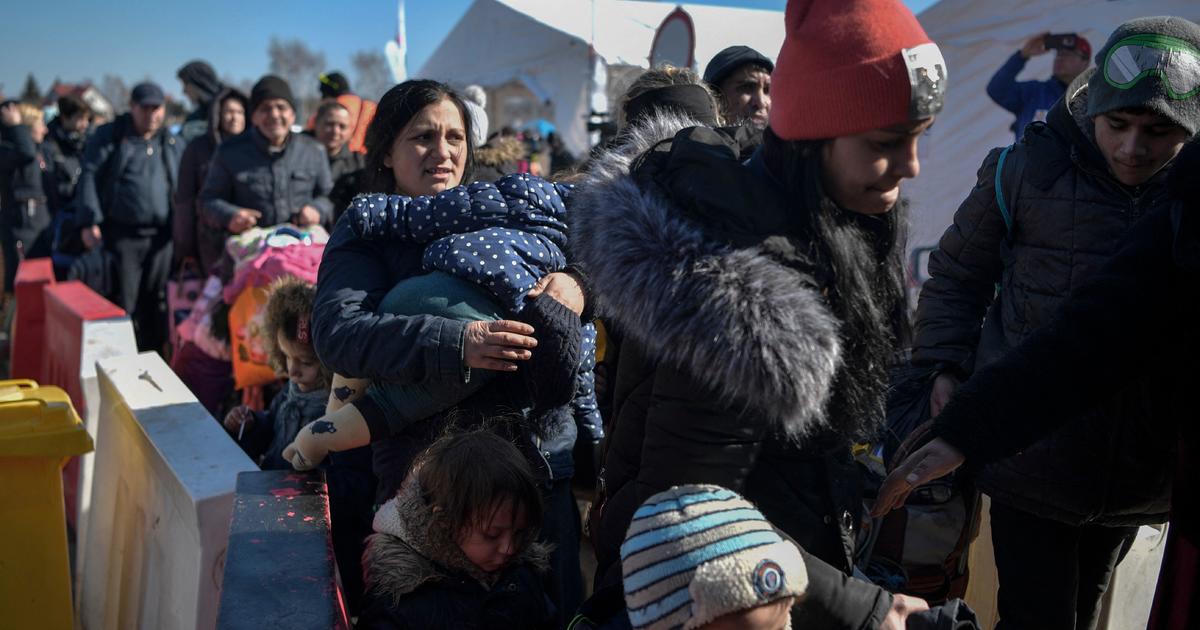 The Russian invasion of Ukraine has triggered the swiftest refugee displacement crisis in Europe since World War II, prompting more than 2.5 million people to flee the country during the conflict’s first two weeks.

The historic exodus of mostly women and children, coupled with harrowing images depicting the plight of both civilians in Ukraine and refugees in neighboring countrieshas fueled global outcry.

In Europe, a range of liberal and conservative governments, including some currently implementing hard-line border policies toward migrants from the Middle East, have welcomed displaced Ukrainians with open arms.

Here in the US, the refugee crisis has raised a key question: Will America offer refuge to Ukrainians fleeing the largest conventional war in Europe in decades?

Will the US receive Ukrainian refugees?

While President Biden said Friday that the US should welcome them “with open arms,” ​​the US will likely not receive large numbers of Ukrainian refugees in the immediate future, immigration policy experts said.

As of March 11, most Ukrainian refugees have fled to neighboring countries, 1.5 million of them to Poland, 225,000 to Hungary and 176,000 to Slovakia. Tens of thousands have also crossed into Russia, Romania and Moldova. Another 282,000 have left for other European countries, including Germany.

Many refugees may seek to remain in Europe, closer to Ukraine, in case there is a chance to return in the near future, said Theresa Cardinal Brown, a former Department of Homeland Security (DHS) immigration official. That calculus may change, she said, depending on how long the conflict lasts.

“We do not know how many of the Ukrainians leaving now will want to get permanent resettlement,” Cardinal Brown, now an immigration and border policy analyst at the Bipartisan Policy Center, told CBS News. “A lot depends on the outcome of what’s happening there now.”

On March 4, the European Union authorized a Temporary Protective Directive for Ukrainians fleeing the Russian invasion, with all 27 member states agreeing to provide them short-term residency and other benefits, such as work authorization.

A State Department spokesperson said the US is open to resettling Ukrainians who fled to third countries if “they can not be protected in their current location,” but conceded it “is not a quick process.”

The US refugee process, which involves interviews, security screenings, medical checks and other bureaucratic steps, takes years to complete. Under US law, refugees must prove they have a well-founded fear of persecution because of their race, nationality, religion, politics or membership in a social group.

The US refugee processing center in Kyiv – which typically processes US-bound refugees from Eurasia – is continuing “limited operations” from Chisinau, Moldova, the State Department spokesperson said.

What other avenues do Ukrainians have to come to the US?

Ukrainians fleeing Russia’s attack could come to the US through other means, but they currently need a visa to enter legally and the pathways are limited.

The US awards temporary visas to tourists, students, business travelers and other short-term visitors, and immigrant visas to those allowed to move to the US permanently because they were sponsored by American family members or employers.

After suspending visa processing in Ukraine, Russia and Belarus, the State Department announced last week that Ukrainians can apply for a temporary visa at any American consulate. It also designated the US consulate in Frankfurt, Germany, as the processing hub for Ukrainian immigrant visa applications.

But visa seekers will face long wait times due to limited processing capacity at US consulates and a growing backlog of applications that was exacerbated by the pandemic. They also may not be able to prove eligibility for temporary visas, since those require proof that applicants intend to return to their home country.

US officials do have an authority known as parole that allows them to admit foreigners who do not have visas on humanitarian grounds. Parole was used last year to resettle more than 70,000 Afghan evacuees after the Taliban reconquered Afghanistan.

Cardinal Brown, the former DHS official, said the US could use parole to admit some displaced Ukrainians, such as family members of US citizens and green card holders. Unlike refugee status, parole does not place recipients on a pathway to permanent U.S. residency, but it can allow them to work legally.

“If there are a lot of Ukrainians who do want to come to the United States and we have not provided the means to do so, we find more of them trying to come in unauthorized way,” she said, citing a recent uptick in Ukrainians processed by US officials along the Mexican border.

In the first four months of fiscal year 2022, which started in October, 1,029 migrants from Ukraine entered U.S. custody along the southern border, compared to 676 total arrests in fiscal year 2021, DHS data show.

Has the US previously resettled Ukrainian refugees?

Yes. Since fiscal year 2001, the US has welcomed more than 50,000 refugees from Ukraine, which has been the largest European source of US refugee admissions over the past two decades, government figures show.

Last month, 427 Ukrainians entered the US as refugees – a 390% jump from January.

The number of Ukrainians resettled by the US increased sharply under President Trump, whose dramatic cuts to the refugee program primarily limited admissions of would-be refugees from countries in Africa and the Middle East plagued by war and ethnic conflict.

Unlike other refugees, those admitted under the Lautenberg Amendment do not have to prove they could face persecution on an individual basis. Today, the decades-old law mostly benefits Protestant Christians.

What actions has the US already taken?

The Biden administration has so far authorized $ 107 million in humanitarian aid for Ukrainian refugees and civilians. According to the White House, the funds are designed to provide food, medical services, thermal blankets and other relief to people displaced by the conflict in Ukraine.

A massive government spending bill passed by Congress this week would allocate $ 6.8 billion in US humanitarian assistance funds for Ukrainian refugees.

On March 3, Homeland Security Secretary Alejandro Mayorkas made an estimated 75,100 Ukrainians in the US eligible for Temporary Protected Status (TPS), a humanitarian program that allows beneficiaries to live and work in the US legally while their home countries are occupied by war or other crises.

Only Ukrainians who were in the US as of March 1 are eligible for the 18-month TPS program.

Advocacy groups have also asked DHS to grant an estimated 1,700 Ukrainians studying at US schools Special Student Relief, which would reduce their course load requirements and allow them to work.

Camilo Montoya-Galvez is the immigration reporter at CBS News. Based in Washington, he covers immigration policy and politics.