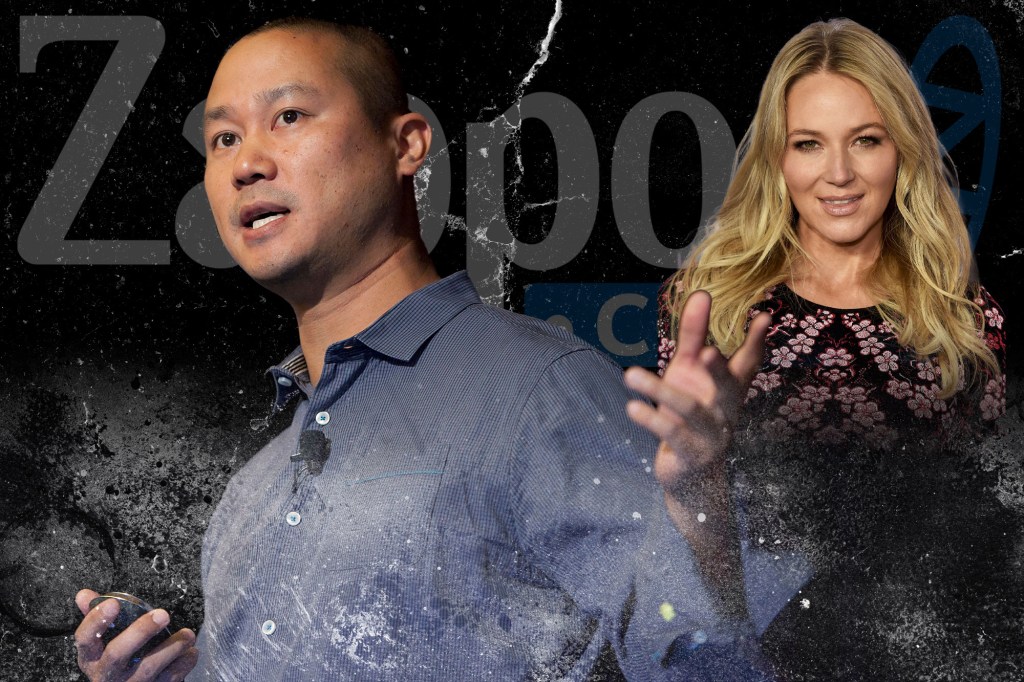 The COVID-19 pandemic had prevented the famous folk singer from seeing her friend Tony Hsieh – the internet innovator and Zappos.com CEO who aimed to transform corporate America with an ethos of joy – for months. When she finally visited him in August of 2020, the scene inside his lavish Park City, Utah, compound terrified her.

The floors of the house were covered with empty canisters of nitrous oxide, the mind-altering gas that Hsieh, 46, huffed constantly. His emaciated frame quivered with excitement as he babbled about plans to start a new country and solve world peace.

Sink and shower faucets run day and night to evoke the sound of waterfalls. Dog droppings lay wherever Hsieh’s treasured terrier, Blizzy, left them – they were “parts of nature,” the tech guru said.

Fascinated by fire, Hsieh kept hundreds of candles burning throughout the house, while a fire ring in his bedroom blazed with an open flame. Dozens of paid hangers-on who lived with him in the mansion he called “the Ranch” seemed oblivious to their bizarre surroundings.

Jewel, who has run a nonprofit mental health in the years since her pop heyday in the 1990s, could see that Hsieh needed help. But he waved off her attempts to discuss his precarious mental state.

“If he kills himself and everyone else in there from a huge fire,” she said as she departed, “you can not say you were not warned.”

Three months later, Hsieh was dead, asphyxiated by a fire he sparked inside a locked shed – a coronavirus victim who will never be counted in the pandemic’s official toll.

“He was absolutely a direct casualty of COVID,” author Kirsten Grind told The Post. “When the world shut down in March 2020, it took away his life’s whole purpose: being around people.”

In “Happy at Any Cost” (Simon & Schuster), out Tuesday, Grind and co-author Katherine Sayre, colleagues at the Wall Street Journal, tell the devastating story of a brilliant man whose hidden mental illnesses doomed him in a locked-down world.

Hsieh, the son of Taiwanese immigrants who raised him in Marin County, Calif., Was the founder of Zappos. The online shoe-sales company valued employee happiness and was fueled by extravagant parties and a love of “weirdness,” with Hsieh asking potential employees: “On a scale of 1 to 10, how weird are you?”

“Our number one priority as a company is company culture,” he said in 2010. Workplace joy, he believed, would first create business success, then heal the world’s ills.

The first part actually seemed to work. Happy Zappos workers sold millions of shoes, and Hsieh earned an estimated $ 840 million when he sold the company to Amazon in 2009. He stayed on as Zappos’ CEO.

Hsieh’s philosophy was fueled by rave culture and by the annual Burning Man festival, where thousands of techies and artists gather for a communal week of wild self-expression. He reveled in the power of what he called the “hive switch,” the emotional charge he felt as part of a large crowd.

He spent $ 350 million to buy up a run-down part of Las Vegas and transform it into a permanent Burning Man community. His quirky life there, in an Airstream trailer park amid a loyal crew of creatives, a constant stream of visitor, and a pet alpaca named Marley, made headlines.

But beneath the party-hearty facade, Hsieh was obsessed with untreated mental health problems, including social anxiety, depression and what he believed to be a form of autism spectrum disorder.

“He was such a contradiction,” Grind said. “With this intense social anxiety, you’d think he would avoid group situations. But instead, Tony derived joy from them.

“He was drawing on other people’s energy like a drug.”

Hsieh never sought professional therapy, but self-medicated, initially with alcohol. At Zappos, “it would not be odd to see the CEO do a shot in the middle of the day or at a meeting,” Grind and Sayre write, or for underlings to be invited to do the same.

By early 2020, his heavy use of the hallucinogen ketamine had close friends concerned. Hsieh was becoming delusional, speaking with manic intensity about ketamine’s power to rescue humanity from a “Matrix” -like simulation that controlled the world.

That February, Hsieh agreed to a short stint at a rehab in Park City, where he owned a small vacation home he used during the Sundance Film Festival each year.

“He was acting erratically, and he was the CEO of Zappos,” Grind said. “He had to be very strongly convinced that his behavior could reflect badly on the company. But he did not think he needed rehab. “

Two weeks later he emerged, drug-free and eager to embark on a plan to create a network of getaway rentals in Park City. He settled there temporarily to buy up houses.

Then the pandemic hit. The communal lifestyle of his urban trailer park was destroyed as lockdowns and stay-home orders took hold.

“Initially you saw him rise to the occasion,” Grind said. Hsieh directed Zappos’ COVID response from Utah, overseeing a smooth transition to remote work for his Las Vegas-based employees.

But within weeks, “it all just fell apart,” she added. “By the end of March, he was basically calling everyone he’d ever met – and he had hundreds of acquaintances – and essentially saying, ‘COVID be damned, we’re just going to get people here.'”

Hsieh paid nearly $ 16 million to buy a mountain compound where he could form a utopian COVID-free community with his growing entourage. The nine-bedroom, 13-bath main house sat on 18 acres of land with a private lakefront beach. The deal included a million-dollar enticement for the owners to move out immediately.

Soon Hsieh was offering to double the salary of anyone who agreed to join his Park City group. The deal drew a flock of flunkies who busied themselves by coming up with harebrained business schemes, like launching hot-air balloons from the ranch’s backyard, that the addled Hsieh funded generously.

“There was just no incentive for these people to help him get well,” Grind said.

And the small group could not satisfy Hseih’s need to interact with scores of different people every day. Soon he was substituting hits of nitrous oxide – also known as whippets and used by dentists as an anesthetic and by chefs to make whipped cream – to chase the high he once got from human contact. He was inhaling 50 canisters a day when Jewel saw him in August.

By then, Amazon had quietly lost patience with its wayward superstar. Grind and Sayers reveal that Hsieh’s incoherence in a June phone call with Jeff Wilke, the Amazon executive who oversaw Zappos, set off alarm bells at the parent company.

“Wilke did not put him on a formal leave,” Grind said. “He just said, basically, get yourself together, come back, and we’ll figure it out. And Tony was just not able to come back. “

At the end of August, the Las Vegas Review-Journal ran a brief item: “Zappos CEO Tony Hsieh, Champion of Downtown Las Vegas, Retires.” The party-loving founder did not get a good-bye bash or even an official departure announcement from the company he created.

“Amazon did not force him out exactly,” Grind said, “but they forced his hand.”

That fall, Hsieh took his entourage on a frenzied travel spree from Utah to Alaska to Puerto Rico to Connecticut, where they stayed at the waterside home of Rachael Brown, a former girlfriend who had been living at the ranch.

As the group prepared to head to Hawaii for the next leg of their trip, Hsieh’s elderly dog ​​Blizzy, half-blind and ailing, had to be put down. The animal was buried in Brown’s back yard.

“Tony was despondent,” Grind and Sayre write. “He believed he had lost his one true partner.”

Three days after Blizzy’s death, Hsieh locked himself into a small storage shed filled with pool equipment and folding chairs, a few steps from the dog’s grave. He lit a candle and fired up a propane space heater as he took hits of nitrous oxide. Employees checked on him every few minutes, bringing pizza, water and more whippets.

Brown’s backyard security system recorded the moment at 3:15 am when Hsieh took his final look at the outside world. Wisps of smoke curled out as he opened the door. He closed himself back in with the smoldering flames.

He was unconscious, but not badly burned, when the New London Fire Department broke through the door 15 minutes later. But the smoke he inhaled caused catastrophic brain damage.

Hsieh never awakened. He died in a nearby hospital on Nov. 27. The cause of death was ruled an accident.

Days later, Jewel posted a touching tribute to him on Instagram. She recalled a conversation they once had about the meaning of success.

“His answer was: the willingness to lose it all,” she said through tears. “That’s what it really takes – you have to put your whole heart into something you believe.”

Gazing into the camera, she sang “Somewhere Over the Rainbow.”

“Tony, may you be over the rainbow with the bluebirds,” she said. “And your worries far behind.”