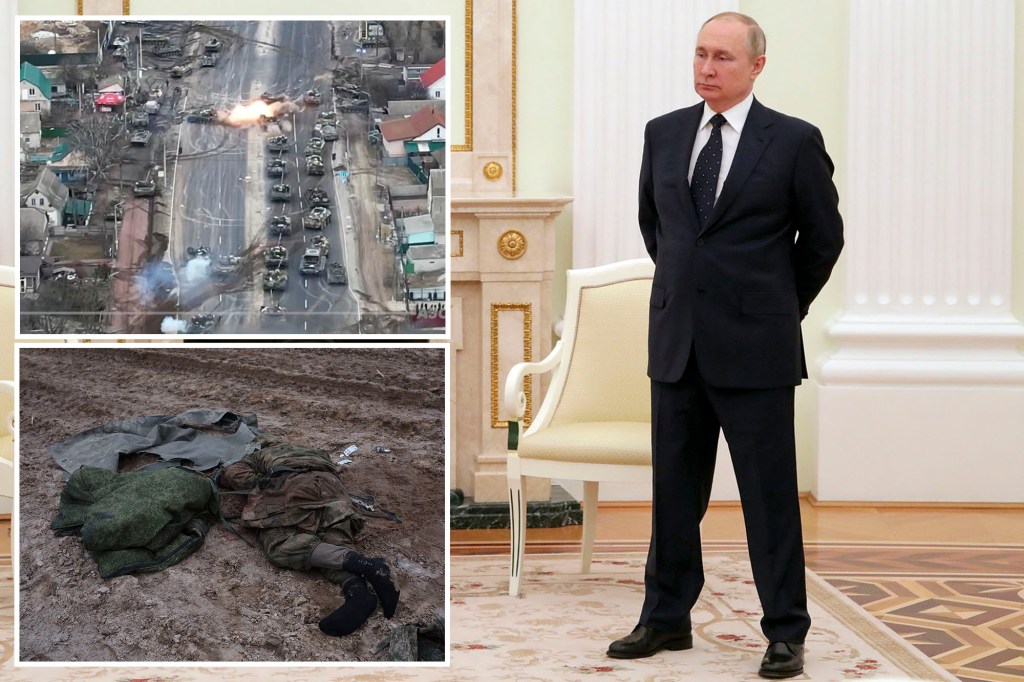 Defiant Russian pundits risked incurring strongman Vladimir Putin’s wrath during an appearance on a TV show where they voiced opposition to the invasion of Ukraine – which was described as “another Afghanistan, but even worse.”

Karen Shakhnazarov, a noted filmmaker, producer and screenwriter, said on the state-run show “The Evening With Vladimir Soloviev” that Russia should “stop our military action.”

“The war in Ukraine paints a frightening picture, it has a very oppressive influence on our society,” the 69-year-old Kremlin-controlled channel Rossiya 1 pundit said, according to The Daily Beast.

“Ukraine, whichever way you see it, is something with which Russia has thousands of human links. The suffering of one group of innocents does not compensate for the suffering of other innocent people, ”he said.

“I do not see the probability of denazification of such an enormous country,” Shakhnazarov continued in remarks that stood in stark contrast to Putin’s message about what he has called a “special military operation.”

“We would need to bring in 1.5 million soldiers to control all of it. At the same time, I do not see any political power that would consolidate Ukrainian society in a pro-Russian direction, ”he said.

“The most important thing in this scenario is to stop our military action. Others will say that sanctions will remain. Yes, they will remain, but in my opinion, discontinuing the active phase of a military operation is very important, ”Shakhnazarov added.

His comments come amid the Kremlin’s harsh crackdown on news organizations both foreign and domestic whose journalists are based in Russia.

Last week, Maria Baronova, editor-in-chief of the state-run media outlet RT, stepped down after publicly criticizing the invasion, telling her followers on the encrypted Telegram messaging service: “Our granddads did not fight for this.”

On the show Thursday, Shakhnazarov also said that “public opinion within Russia is changing.”

“People are shocked by the masses of refugees, the humanitarian catastrophe, people start to imagine themselves in their place. It’s starting to affect them. To say that the Nazis are doing that is not quite convincing, strictly speaking, ”he said.

“On top of that, economic sanctions will start to affect them, and seriously. There will probably be scarcity. A lot of products we do not produce, even the simplest ones. There’ll be unemployment, ”he continued.

“We did not even feel the impact of the sanctions just yet… We need to be ready for total isolation. I’m not panicking, just calling things by their proper name, ”he said, prompting Kremlin loyalist Soloviev to snap,“ Gotcha. We should just lay down and die, ”The Daily Beast reported.

But Bagdasarov continued the anti-Kremlin narrative.

“Let Ukrainians do this ‘denazification’ on their own. We can not do it for them… As for their neutrality, yes, we should squeeze it out of them, and that’s it. We do not need to stay there longer than necessary, ”he said.

“Do we need to get into another Afghanistan, but even worse?” he added, referring to the 10-year Soviet occupation that ended in 1989 and contributed to the fall of the USSR.

Guest Dmitry Abzalov, director of the Center for Strategic Communications, said that although energy prices will go up for most of the West, it will not do much to ease the pain for Russian citizens, according to the Daily Beast.

Abzalov argue that once the Kremlin ends its invasion, Western companies that temporarily paused their operations in Russia will quickly return.

“It’s about toxicity, not just sanctions… It will go away once the situation stabilizes,” he said on the show.