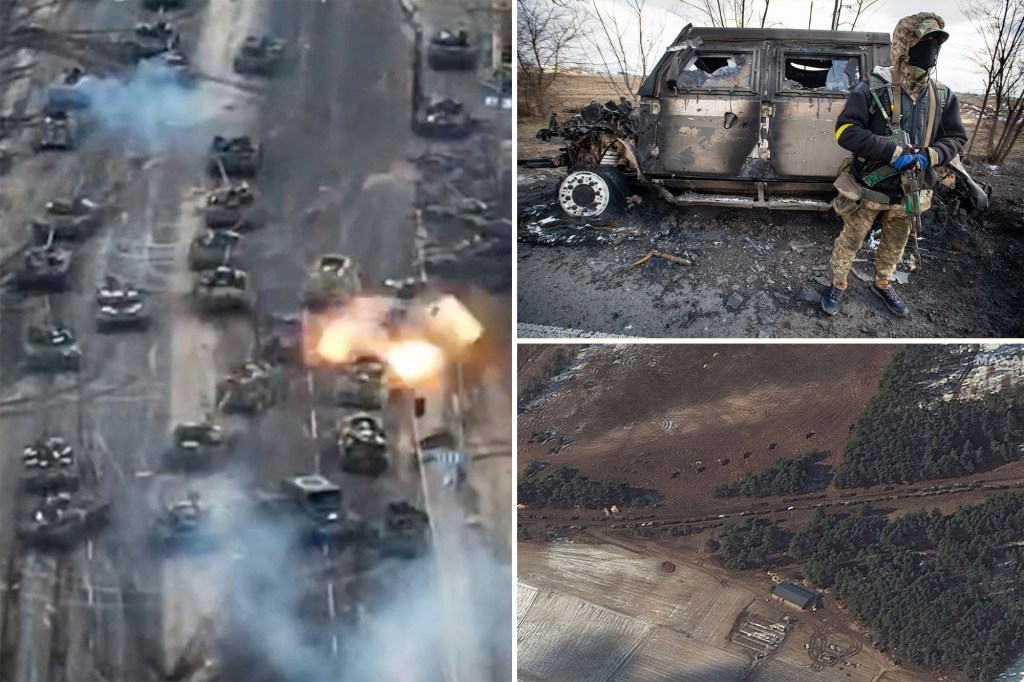 As Russia’s war in Ukraine entered its third week, the massive Kremlin convoy that had been stalled outside Kyiv began to split up and circle the capital as relentless attacks on a port city amounted to “war crimes,” officials said.

The 40-mile convoy that had inched towards Kyiv for weeks amid reports of food and fuel shortages had been redeployed, satellite images showed. Some armored vehicles were seen in northern suburbs as others entered forests and moved into firing positions.

The dispersion came after drone footage released by the Ukrainian military showed Kremlin tanks blown up in an ambush on their way to the city where President Volodymyr Zelensky had remained defiantly hunkered down since the unprovoked invasion began.

Armed civilians had surrounded the capital in large numbers ahead of an expected onslaught, Kyiv Mayor Vitali Klitschko said, as the number of refugees that fled Ukraine grew to 2.3 million Thursday.

“Every street, every house is being fortified,” Klitschko said. “Even people who in their lives never intended to change their clothes, now they are in uniform with machine guns in their hands.”

Katya, 14, was recovering at a hospital outside Kyiv after being ambushed by gunfire from a roadside forest as her family tried to flee the city in a car.

The teen was shot in the hand and her father, who was in surgery, had been shot in the head and had two fingers blown off, said her mother, who identified herself only as Nina.

In Turkey, Russian Foreign Minister Sergey Lavrov met with his Ukrainian counterpart Dmytro Kuleba to discuss a 24-hour cease-fire, but the men failed to make any progress during their first meeting of the war.

Ukraine refused demands to surrender, and Russia said it would not retreat in its suspected efforts to topple the former Soviet territory and realign it with Moscow.

More than 1,300 people had been killed during a 10-day siege of the city. A refusal to let the city’s 430,000 residents evacuate combined with attacks on humanitarian aid suppliers equaled “outright terror,” Zelensky said.

“They have a clear order to hold Mariupol hostage, to mock it, to constantly bomb and shell it,” Zelensky said in a video address.

Many trapped in the frigid burnt-out city were without heat, electricity or phone service and were desperate for food and fuel, as bodies were tossed in mass graves, officials said.

Starving citizens attacked each other for food, bought vegetables on the black market and stole gas from cars. Stores had long been emptied of meat and medicine.

A Wednesday airstrike that killed three people, including a child, at a maternity hospital, and injured 17, was a “war crime,” international leaders said.

“They want to destroy the people of Mariupol. They want to make them starve, ”Deputy Prime Minister Iryna Vereshchuk said. “It’s a war crime.”

“The eyes of the world are on this war and what Russia has done in terms of this aggression and these atrocities,” said Vice President Kamala Harris, who was across the border in Poland.

“I do not have a home anymore. That’s why I’m moving, ”said Aleksander Ivanov, as he pulled a cart with bags down an empty street lined with damaged buildings.

“It does not exist anymore. It was hit, by a mortar, ”the exhausted-looking man said.

“You will definitely be prosecuted for complicity in war crimes,” he said in his nightly address.

And then, it will definitely happen, you will be hated by Russian citizens – everyone whom you have been deceiving constantly, daily, for many years in a row, when they feel the consequences of your lies in their wallets, in their shrinking possibilities , in the stolen future of Russian children. ”