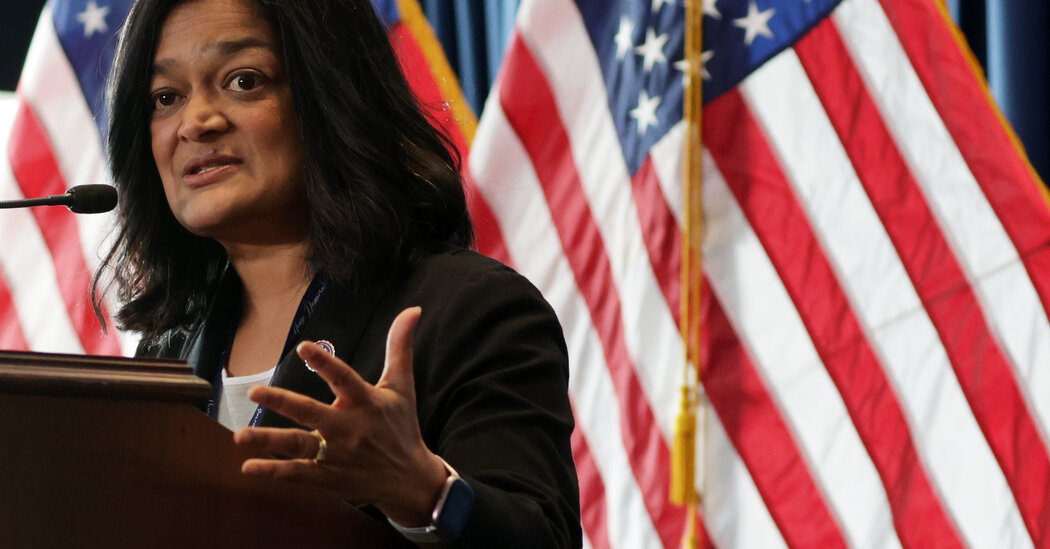 PHILADELPHIA – House Democrats planned a retreat here this week hoping for a reset after a difficult period during which President Biden has been buffeted by rising gas prices, soaring inflation and sagging approval ratings.

Instead, they arrived in buses in the middle of the night after the president’s latest coronavirus aid package had collapsed in Congress late Wednesday, a grim reminder that his legislative agenda has stalled on Capitol Hill as they head into a punishing midterm election season in which they are bracing for big losses.

One year to the day after the enactment of Mr. Biden’s $ 1.9 trillion stimulus plan, a law that remains broadly popular even if the president, at the moment, is not, Democrats are toiling to retool their message and refocus their agenda. They are worried that the accomplishments they helped deliver to Mr. Biden are being drowned out by concern over the rising price of gas and a focus on their legislative failures.

And they are looking to Mr. Biden, who is to address them at the retreat on Friday, to help them reframe the conversation.

Gone is the talk of a transformative agenda to remake the country’s social safety net that was once going to be the centerpiece of Democrats’ sales pitch to voters. The words “Build Back Better” were all but forbidden among the groggy lawmakers who arrived after only a few hours of sleep.

Speaking to reporters, Representative Pramila Jayapal of Washington, the chair of the Congressional Progressive Caucus, joked that the slogan for Mr. Biden’s defunct social policy and climate bill had become like the evil Voldemort in “Harry Potter” – that which must not be named.

Instead, after a year of supporting his agenda, House Democrats have pivoted to beseeching Mr. Biden to act on his own through executive actions to address the outstanding issues they care about before they face voters in November.

Ms. Jayapal said the president could pass executive actions to cap the price of insulin, raise the overtime eligibility threshold in order to increase wages for tens of millions of people, and fix the so-called family glitch in the Affordable Care Act. This is when workers with modest incomes can not afford their employers’ family policies, yet fail to qualify for government subsidies to buy their own insurance.

Representative James E. Clyburn of South Carolina, the No. 3 Democrat, said he recently met with White House officials to discuss executive actions Mr. Biden could take to protect voting rights and overhaul policing, after the demise of his efforts to pass major legislation tackling both issues. And Representative Raul Ruiz, chair of the Congressional Hispanic Caucus, said he wanted to see the president use his executive power to raise the cap on the number of refugees that can be resettled in the United States this year.

Other lawmakers said they hoped a shift to the center debuted at Mr. Biden’s State of the Union address last week, along with strong support for the president’s handling of the war in Ukraine, would be enough to convince voters that Democrats were focused on kitchen-table issues.

“We care about everyday Americans, and they do not,” Representative Hakeem Jeffries, chairman of the House Democratic Caucus, said when asked to sum up his party’s pitch to voters.

The retreat – the group’s first in-person gathering in three years – was a chance for Democrats, who have seen 31 of their colleagues opt to retire, to talk up their achievements and compare notes on how to move forward.

“We have passed two major pieces of legislation that, in any other Congress, would have been historic in and of themselves,” said Representative Steny H. Hoyer of Maryland, the majority leader, referring to the American Rescue Plan and the bipartisan infrastructure bill .

He acknowledged that the landscape may look bleak, but said the political environment this summer would matter more.

“The polls do not look particularly good now, but that’s happened in the past.” Hoyer said.

Representative Sean Patrick Maloney of New York, the chair of the Democratic Congressional Campaign Committee, said Thursday that keeping the Democratic majority depended on speaking to voters in a way that wasn’t too preachy or condescending.

“We spent a bunch of time talking about attributes in addition to issues,” Mr. Maloney said of a closed-door presentation he delivered on Thursday. “Whether voters think we care about them, whether they think we share their values, whether we have the right priorities.”

Every vulnerable Democrat, Mr. Maloney said, was “in the business of having to say, ‘You may not like everything about my political party, but I’m getting it done.'”

Some of the moderate Democrats whose seats are most at risk said the tone of the president’s State of the Union address last week – in which he underscored funding the police, capping the cost of insulin and fighting the opioid epidemic – raised their hopes that he had moved away from simply championing progressive proposals that pleased the party’s left flank but could alienate constituents in conservative-leaning districts like theirs.

“Veterans, opioids, these are things we can come together on,” said Representative Josh Gottheimer of New Jersey, one of 32 Democrats identified by the Democratic Congressional Campaign Committee as running for re-election in a competitive seat. “Ukraine is part of the unity message. That is what I think our caucus is hungry for, especially those of us who believe in the value of reaching out to Democrats and Republicans, and it’s certainly what we’re hearing back at home. ”

That appeared to be the administration’s focus ahead of Mr. Biden’s appearance on Friday, as his team worked to highlight positive economic indicators.

On Tuesday night, administration officials circulated among House Democrats a slide show about deficit reduction, noting that Mr. Biden had reduced the deficit by $ 360 billion in 2021. White House officials have also been promoting record job growth, while making it clear that getting prices under control remains the president’s top priority.

Still, vulnerable Democrats said that was not necessarily enough to boost their political fortunes.

“The metrics are strong – employment, wages – but that does not matter,” said Representative Dean Phillips, who represents a suburban Minneapolis district that was long held by Republicans. “What matters is how people feel.”

Mr. Biden’s new message has also left some progressives angry and concerned that their priorities were being pushed to the margins.

“People say the speech was unifying – unifying because it brought white moderates and white independents back,” said Representative Jamaal Bowman of New York, who is Black, referencing Mr. Biden’s State of the Union address. “I was sitting there, like, ‘Damn, again?’ ”

He added: “George Floyd is dead. There is no national database for police misconduct. ”

“It’s lazy and unacceptable for the president of the United States to only keep the conversation at that shallow level,” he said of the discussion about supporting law enforcement. “It’s deeper than that.”

In Philadelphia this week, feelings were still raw about the demise of Mr. Biden’s emergency request for Covid-19 aid, which Democratic leaders had stripped out of a $ 1.5 trillion spending bill amid disputes over how to finance it. Now the money will have to move separately, and Democrats will need Republican support to win its approval.

“I would have preferred to just pause for another 24 hours and try to figure out” how to move forward, Ms. Jayapal said in an interview. “I’m not in control.”