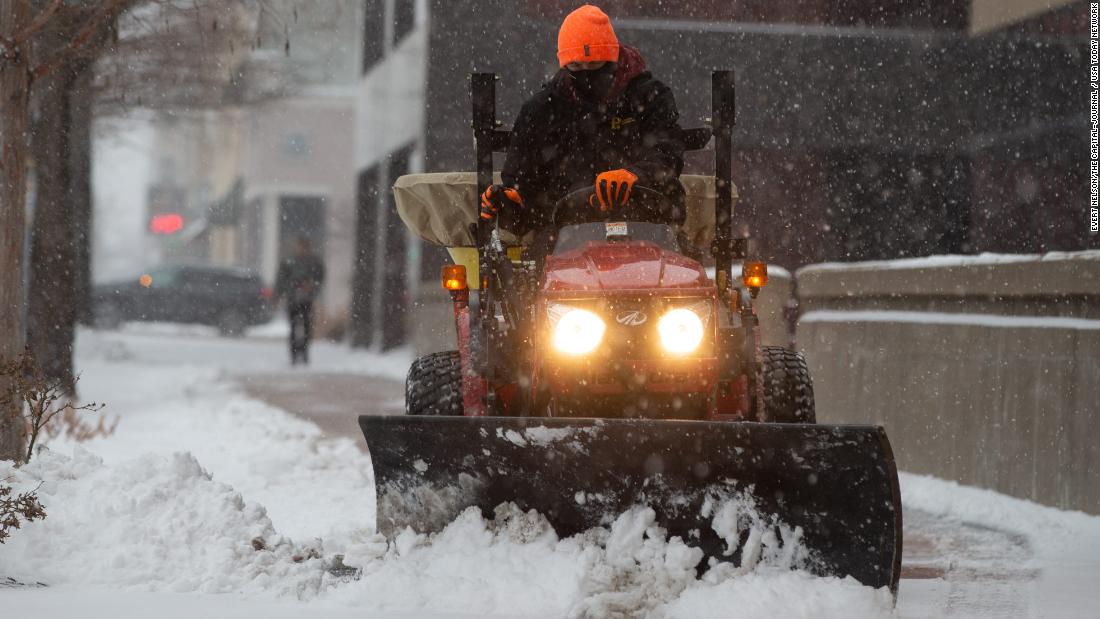 In the Midwest, Kansas and Missouri residents brace for a treacherous wintry mix ahead of the morning commute, with more snow expected for the region.

Temperatures on Friday in areas stretching from Minnesota down through Texas are forecast to plummet 20 to 30 degrees below normal. And by nightfall, snow could begin in the interior parts of the eastern US – making travel miserable for millions.

The storm is expected to strengthen into a bomb cyclone by Saturday and could bring heavy snow and damaging winds to Syracuse, New York, and Pittsburgh among other areas headed toward the interior parts of the Northeast. A bomb cyclone forms when a storm decreases in pressure by 24 millibars (a measurement of pressure) in under 24 hours.
“Snow rates of greater than 1” / hr combined with gusty winds will produce blowing and drifting of snow and severely reduced visibility. This will create difficult to hazardous travel conditions, “the Weather Prediction Center said Thursday.

Winds in parts of the Northeast are forecast to reach between 35 and 45 mph, Marvin Boyd, a meteorologist with the National Weather Service in Burlington, Vermont, told CNN. Widespread snow between 6 and 12 inches, with totals possibly at 15 inches, can be expected, he said.

“Our concern is with the loading on trees. With winds expected to blow 35-45mph, and this heavy wet snow, we could be looking at not only travel problems but numerous power outages,” Boyd said.

Much of Colorado and Kansas on Thursday were inundated with heavy snow, with the greatest totals of 8 to 13 inches falling over western Kansas along interstate 70. To the east, Topeka, Kansas, and Kansas City, Missouri, picked up at least 3 to 5 inches.

The NWS in Kansas City had warned the commute on Thursday and Friday would be messy due to snowy weather. The forecasters said 1 to 3 inches of snow had fallen in the city, which had reduced visibility on roads. Some schools in Kansas City announced they would close on both days due to the hazardous conditions.

The worst of the storm is expected to hit the interior areas of the Northeast beginning late Friday through Saturday, according to forecasts. Those areas are likely to see snow totals exceed 12 inches which could lead to power outages.

The storm is expected to pass between the I-95 corridor and Cape Cod, then along or just off the Maine coast as a sub-970 millibars low, according to the National Weather Service in Boston. The low pressure of the storm is akin to the strength of a category 2 hurricane.

In Syracuse, up to 12 inches of snow could be seen Saturday, with the heaviest amounts falling between midnight Saturday through the afternoon, according to CNN meteorologist Robert Shackelford. And winds are expected to gust up to 45 mph, with temperatures in the 20s.

Portions of Vermont could also see up to 12 inches of snow on Saturday, and winds will also be strong at 40 mph, Shackelford said.

Snow in Pittsburgh could reach up to 8 inches, with the worst conditions happening between early Saturday through noon.

The storm will also bring snow and low temperatures in areas that typically do not see those conditions often.

Up to 3 inches of snow on Friday may fall in Albuquerque, New Mexico, and Nashville, Tennessee, where cold temperatures may help black ice form on roads, Shackelford explained. And in Winslow, Arizona, the snow estimates are similar, but winds may gust up to 40 mph.

“Expect winter driving conditions on many area roads, including Hwy 87 from Winslow south to the rim, and SR 260 from Kohls Ranch east through the White Mtns,” the NWS in Flagstaff tweeted early Friday.

Meanwhile, up to 5 inches of snow could fall in Lexington, Kentucky, while Louisville is expected to see up to 3 inches, Shackelford said. And West Virginia could see up to 7 inches of snow. Rain and snow are expected in Huntsville, Alabama, where flash freezing is possible, and winds may gust up to 40 mph.

CNN’s Chad Myers and Tom Sater contributed to this report.