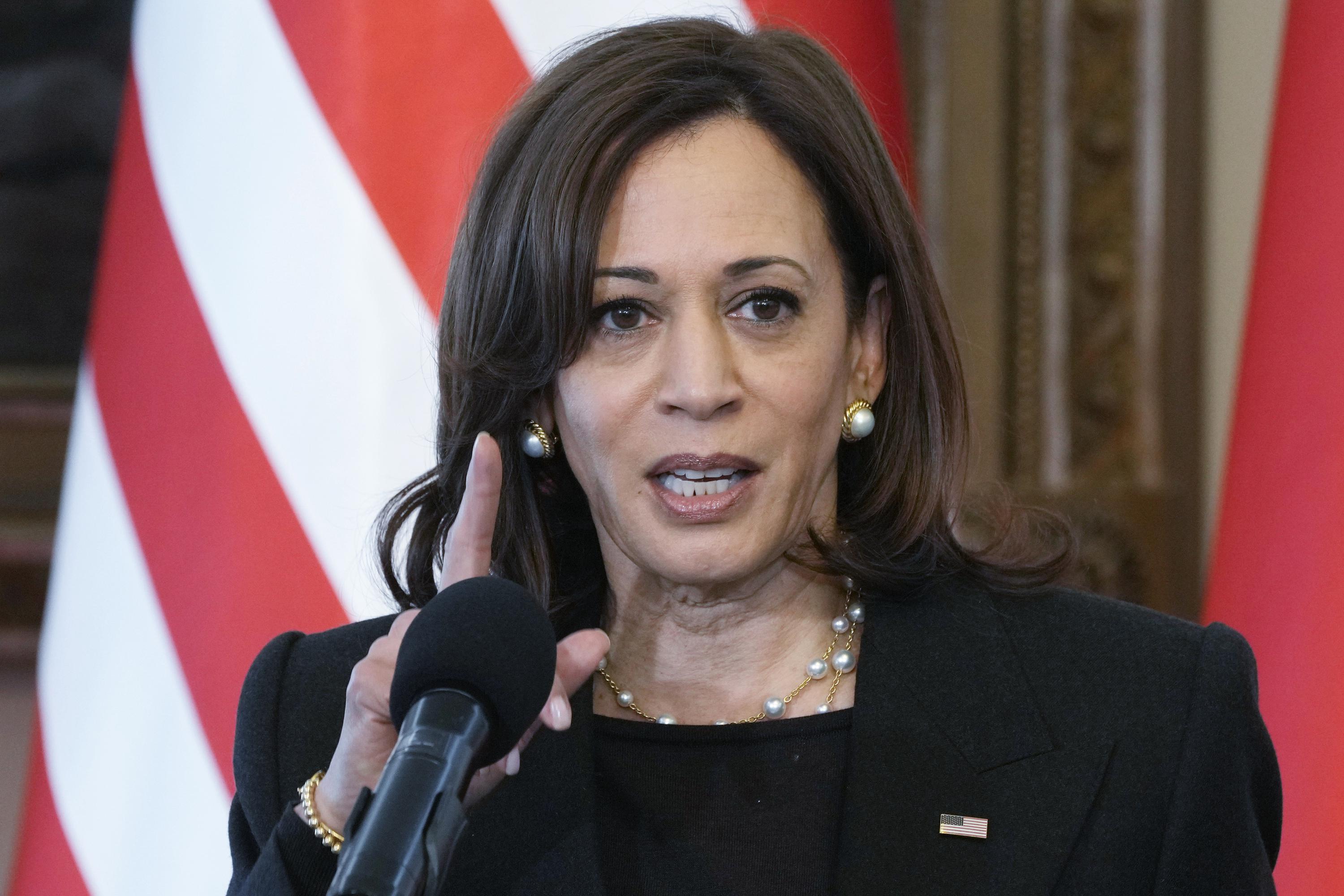 WARSAW, Poland (AP) – US Vice President Kamala Harris on Thursday embraced calls for an international war crimes investigation of Russia over its invasion of Ukraine, citing the “atrocities” of bombing civilians, including a maternity hospital.

Speaking alongside Polish President Andrzej Duda at a press conference in Warsaw, where she is demonstrating US support for NATO’s eastern flank allies, Harris expressed outrage over the bombing Wednesday of the maternity hospital and scenes of bloodied pregnant women being evacuated, as well as other attacks on civilians. She stopped short of directly accusing Russia of having committed war crimes.

“Absolutely there should be an investigation, and we should all be watching,” said Harris, noting that the United Nations has already started a process to review allegations. “I have no question the eyes of the world are on this war and what Russia has done in terms of this aggression and these atrocities.”

Harris’ visit to Poland came amid a kerfuffle between Warsaw and Washington over a Polish proposal to send its Soviet-made fighter jets to a US and NATO base in Germany so they could then go to Ukraine. Poland, in turn, would receive American F-16s.

Poland had publicly floated the proposal without first consulting the US Just as Harris arrived in Warsaw late Wednesday, the Pentagon definitively rejected the idea, saying it would run the risk of escalating the Russia-Ukraine war.

At Thursday’s news conference, both Harris and Duda sought to brush aside differences on the fighter jets issue.

“I want to be very clear, the United States and Poland are united in what we have done and are prepared to do to help Ukraine and the people of Ukraine, full stop,” she said.

Duda for his part sidestepped questions about why Poland announced its proposal without first consulting the United States. He stressed his government’s intention was driven by a desire for “NATO as a whole to make a common decision” on the matter.

“In a nutshell we have to be a responsible member of the North Atlantic Alliance,” Duda said.

Harris’ embrace for an investigation of war crimes came after the Biden administration on Wednesday warned that Russia might seek to use chemical or biological weapons in Ukraine as the White House rejected Russian claims of illegal chemical weapons development in the country it has invaded.

The International Criminal Court prosecutor announced last week he was launching an investigation that could target senior officials believed responsible for war crimes, crimes against humanity or genocide amid a rising civilian death toll and widespread destruction of property during Russia’s invasion of Ukraine.

But investigations at the ICC take many years, and relatively few convictions have ever been won. The ICC was set up in 2002 to prosecute war crimes, crimes against humanity and genocide. The crime of aggression, which can not be investigated in Ukraine because neither Russia nor Ukraine is a member of the court, was added later.

Duda said “it is obvious to us that in Ukraine Russians are committing war crimes.” He added that in his view the invasion was “bearing the features of a genocide – it aims at eliminating and destroying a nation.”

Harris praised the Polish people for their generosity for taking in nearly 1.5 million refugees since Russia invaded Ukraine last month.

“I’ve been watching or reading about the work of ordinary people doing extraordinary things, and so I bring you thanks from the American people,” Harris said earlier during a meeting with Polish Prime Minister Mateusz Morawiecki hours after the US House passed a massive spending bill that includes $ 13.6 billion in aid for Ukraine and its European allies.

The legislation includes $ 6.8 billion to care for refugees and other economic aid to allies.

Harris also met Thursday with seven refugees who have fled from Ukraine to Poland since the Russian invasion began. She praised the refugees for their “courage” and said the conversation would help inform US assistance efforts. The group included a Ukrainian advocate for people with disabilities, a Moroccan university student, a professional film producer from Odessa, a Senegalese community leader and teacher, a LGBTQIA + rights activist from Kyiv, and a Ukrainian energy expert and her young adult daughter.

“We are here to support you, and you are not alone,” Harris told the group. And I know there’s so much about the experience that you’ve had that has made you feel alone. You are not alone. We around the world are watching. ”

The vice president is also scheduled to meet with Canadian Prime Minister Justin Trudeau while in Warsaw. The Canadian leader has been in Europe in recent days meeting with allies about Ukraine.

Harris’ whirlwind visit to Poland and Romania was billed by the White House as a chance for the vice president to consult with two of the leaders from eastern flank NATO nations about the growing humanitarian crisis caused by the Russian invasion of Ukraine.

Already, more than 2 million refugees have fled Ukraine – with more than half coming to Poland – and even more expected to arrive in the days ahead.

Duda warned of a “refugee disaster” if Poland does not receive more assistance to help house and feed Ukrainians fleeing the conflict. He said he asked Harris for the US to “speed up” the process for those Ukrainian refugees who would want to go to the US and might have family there.

“The United States is absolutely prepared to do what we can and what we must to support Poland, in terms of the burden that they have taken on,” Harris said.

Harris will travel on Friday to Bucharest, where she will meet Romanian President Klaus Iohannis.