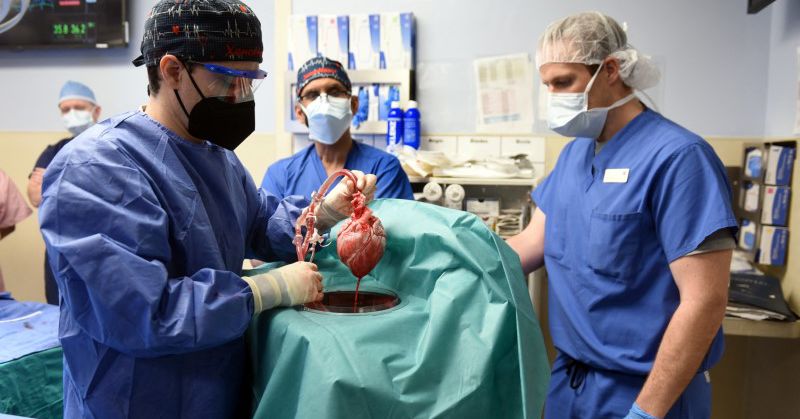 March 9 (Reuters) – A 57-year-old man with terminal heart disease who made history as the first person to receive a genetically modified pig’s heart died on Tuesday at the University of Maryland Medical Center (UMMC), the hospital said.

His condition began deteriorating several days ago, the hospital said in a statement on Wednesday, and he was given “compassionate palliative care” after it became clear that he would not recover.

Bennett “was not able to overcome what turned out to be the devastating debilitation” caused by the heart failure he experienced before the transplant, Dr. Bartley Griffith, director of the UMCC cardiac transplant program, said in a videotaped statement.

Bennett was able to communicate with his family during his final hours, the hospital said.

Surgeon Muhammad M. Mohiuddin, MD leads a team placing a genetically-modified pig heart into a storage device at the Xenotransplant lab before its transplant on David Bennett, a 57-year-old patient with terminal heart disease, at University of Maryland Medical Center in Baltimore, Maryland, US January 7, 2022. Picture taken January 7, 2022. University of Maryland School of Medicine (UMSOM) / Handout via REUTERS.

Bennett first came to UMMC as a patient in October and was placed on a heart-lung bypass machine, but was deemed ineligible for a conventional heart transplant.

After Bennett received a pig heart that had been modified to prevent rejection with the use of new gene editing tools, his son called the procedure “a miracle.”

For Bennett, the procedure was his last option.

“Before consenting to receive the transplant, Mr Bennett was fully informed of the procedure’s risks, and that the procedure was experimental with unknown risks and benefits,” the hospital said.

Researchers have long considered pigs to be a potential source of organs for transplants because they are anatomically similar to humans in many ways. Prior efforts at pig-to-human transplants had failed because of genetic differences that caused organ rejection or viruses that posed an infection risk.

“The demonstration that it was possible – that we were able to take a genetically engineered organ and watch it function flawlessly for nine weeks, is pretty positive in terms of the potential for this therapy,” Griffith said.