Earlier, Ukraine’s national electricity grid operator, Ukrenergo, said it had a team ready to restore power at the closed Chernobyl nuclear power plant and was waiting for a safe corridor to be created. It also rejected an offer from neighboring Belarus to send specialists to help fix the high-voltage power transmission line.

The site of a catastrophic 1986 nuclear accident was disconnected from the grid by Russian forces, Ukrainian officials said Wednesday, potentially jeopardizing the cooling of nuclear material still stored at the site and sparking global concern.

“Ukrenergo expects a safe corridor that will enable the reconstruction of the line to power Chornobyl,” it said in a Facebook post Thursday, using Ukraine’s spelling for the plant. “Our repair teams are ready to restore the line immediately, despite the threat of being shot by the enemy and are waiting for permission.”

The controversy over the transmission line repairs comes amid another over poor and stressful working conditions at the Chernobyl plant: Limited access to medicine. No cellphone or landline connections. And now a disruption in electricity. Some 210 technical experts and guards inside the idle Chernobyl site face “worsening” conditions, unable to leave the facility since Russian forces took control two weeks ago, Ukrainian officials said.

Over 340 miles southeast of Chernobyl, workers at the Zaporizhzhia nuclear power plant, a part of which was set ablaze by Russian forces as they captured the complex last week, are in “very bad psychological conditions,” according to Petro Kotin, head of Ukraine’s state-owned atomic energy firm Energoatom. Nuclear technicians are being forced to work under gunpoint, Kotin told local media outlets Wednesday, adding that the plant is completely locked down by Russian forces.

Nuclear experts have raised concerns about the conditions faced by employees at both facilities as their occupation continues. The IAEA, a nuclear watchdog for the United Nations, says sufficient rest is a pillar of nuclear safety. Employees must be able to rest and work in regular shifts and be able to make decisions free of “undue pressure,” it said.

Ukrainian Deputy Prime Minister Iryna Vereshchuk also appealed in a video posted Thursday on Telegram for crews to be allowed in to Chernobyl to repair a “special power transmission line” that she said has been damaged by Russia.

“We demand that a repair team immediately be allowed access to get rid of the damage,” Vereshchuk said. “We ask the global community to focus its attention on this problem.”

Ukrenergo rejected the offer in an online post Thursday and said it did not need Belarusian assistance to repair the high-voltage lines.

“All the reports of the Russian and Belarusian media about the fixing / restoring of the Chernobyl nuclear power plant by Belarus are a provocation aimed at exacerbating the situation,” Ukrenergo said.

“We need a cease-fire and the admission of our repair teams, who have been waiting for approval to leave for repairs since yesterday. … Just stop the shelling and let our teams do their job! ” the utility added.

Electricity is needed for cooling, ventilation and fire-extinguishing systems at the closed site. Emergency diesel generators are powering the plant for now but have limited fuel, according to Ukrenergo.

Ukrainian Foreign Minister Dmytro Kuleba on Wednesday demanded a cease-fire with Russia to allow for repairs.

He warned that after reserve diesel generators run out of fuel, “cooling systems of the storage facility for spent nuclear fuel will stop, making radiation leaks imminent.”

However, the International Atomic Energy Agency said Wednesday that the power loss “violates [a] key safety pillar on ensuring uninterrupted power supply, ”but it added that“ in this case IAEA sees no critical impact on safety. ”

The UN nuclear watchdog said factors including the volume of cooling water at the Chernobyl site were “sufficient for effective heat removal without the need for electrical supply.”

Ukraine’s parliament reiterated demands for a cease-fire Thursday and made a formal plea for IAEA specialists to come to Ukraine to “assess the situation.” It said repairs at Chernobyl are “currently impossible.”

“The situation at the Chernobyl nuclear power plant is difficult …. We do not know what to expect from the occupiers. They are monkeys with a grenade, ”Andrii Herus, chairman of the committee on energy and housing, said in a Telegram post.

“We invite IAEA specialists to Ukraine not only to learn from our words what is happening at Ukrainian nuclear power plants but also to see for themselves what the occupiers are doing.”

Officials at Ukraine’s state-run nuclear company Energoatom said in a post on Telegram on Thursday that two of the four power lines at the Zaporizhzhia nuclear power plant, the country’s largest and 340 miles southeast of Chernobyl, have also been “damaged by the occupiers. ” It warned that if the other two power lines were damaged, it could lead to a “catastrophe.”

“At the Zaporizhzhia NPP, which like Chernobyl is under the control of the occupying forces, personnel continue to work under the barrels of machine guns,” Energoatom head Petro Kotin told local media.

Nuclear experts have raised concerns about the conditions faced by the hundreds of technical employees and guards at both the Zaporizhzhia and Chernobyl sites as the Russian invasion continues, with reports of limited access to food, medicine and communications.

The IAEA also said Wednesday it has “lost data transmission from its safeguards systems” installed to monitor nuclear material at both the Chernobyl and Zaporizhzhia nuclear power plants. Director General Rafael Mariano Grossi tweeted that he was in Antalya, Turkey, on Thursday joining diplomatic officials to discuss the “urgent issue” of ensuring the safety and security at Ukraine’s nuclear facilities.

The Chernobyl catastrophe ranks as the world’s worst nuclear power plant accident, after explosions and fires in 1986 sent a huge radioactive cloud over parts of Europe and left contaminated soil and other fallout, which remains dangerous, at the plant site.

The Chernobyl zone is still one of the most radioactively contaminated places in the world despite being decommissioned. A small number of people still live in the area – mostly elderly Ukrainians who refused to evacuate. Robots inside the shelter work to dismantle the destroyed reactor and gather up radioactive waste. It is expected to take until 2064 to finish safely dismantling the reactors.

Last month, the Russian Defense Ministry confirmed that its forces had taken control of the area near the site as part of Russia’s wider invasion of Ukraine, sparking global alarm.

The IAEA this week reiterated an offer to both sides for its teams to travel to Chernobyl and other sites in Ukraine to help protect nuclear facilities amid the continuing conflict. 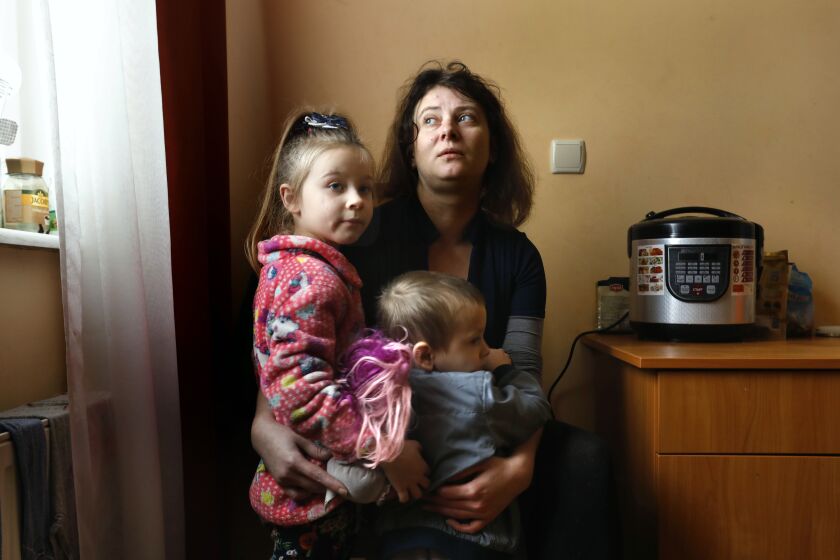