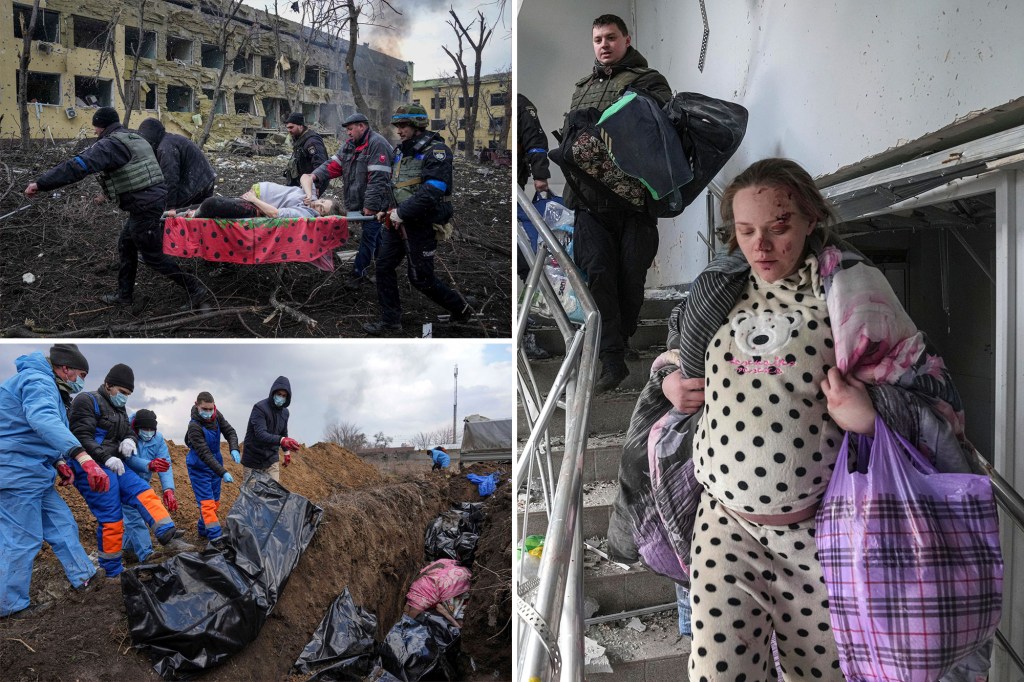 Ukrainian President Volodymyr Zelensky on Wednesday night slammed Russia’s bombing of multiple hospitals as a war crime and shamed the West in a renewed call for assistance as the Russian invasion rages on.

“Today, we must be united in condemning this war crime of Russia, which reflects all the evil that the invaders brought to our land,” Zelensky said in his nightly address, referring in part to the airstrike of a maternity hospital in the besieged city of Mariupol.

At least three people were killed, and 17 were wounded in the airstrike, according to the Associated Press.

The devastating attack was was one of at least three bombings Wednesday by Russian forces on hospitals in war-torn Ukraine.

The two other attacks on medical facilities, including a children’s hospital, were in In Zhytomyr, a city of 260,000 to the west of Kyiv, according to Mayor Serhii Sukhomlyn. No one was wounded, he said.

“A children’s hospital. A maternity hospital. How did they threaten the Russian Federation? ” he said in his address.

“What kind of country is this, the Russian Federation, which is afraid of hospitals, afraid of maternity hospitals, and destroys them?”

The aerial assault in Mariupol, a strategic city of 430,000, came as local authorities there hurried to bury the dead from the past two weeks of fighting in a mass grave.

Mariupol has been bombed while the city has been encircled by Russian forces for a prolonged period of time.

Despite the continued aggression, Zelesnky said about 35,000 Ukrainians were rescued through three humanitarian corridors on Wednesday.

The refugees traveled along the safe routes from the cities of Sumy, Kyiv and its surrounding areas, and from Enerhodar, the president said in an address late Wednesday.

Nationwide, thousands of civilians and soldiers are thought to have been killed since Putin’s forces invaded.

In Mariupol alone, Zelensky said 1,200 people have died in the nine-day siege of the city.

More than 2 million people have fled the country since the invasion began on Feb. 24, according to UN estimates.

In his Wednesday night address, Zelensky shamed the West for failing to institute a no-fly zone or deliver 28 Polish fighter jets to help the country fight off Russia’s invasion.

“Together we must return courage to some Western leaders,” Zelensky said in a Wednesday night address.

“So that they finally do what they had to do on the first day of the invasion. Either close the Ukrainian sky from Russian missiles and bombs, or give us fighter jets so that we can do everything ourselves, ”he fumed.

The US and NATO allies have so far refused both requests – fearing a potential escalation of the conflict should they get too involved.