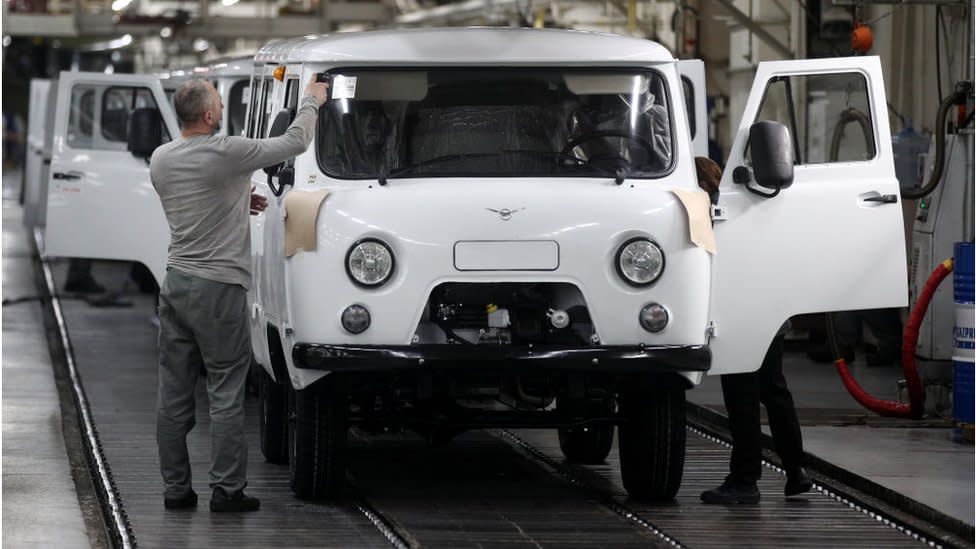 Russia has hit back at western sanctions for invading Ukraine by imposing export bans on a string of products until the end of 2022.

The ban covers exports of telecoms, medical, vehicle, agricultural, and electrical equipment, as well as some forestry products such as timber.

It said: “These measures are a logical response to those imposed on Russia.”

The ministry added that the bans on countries that have “committed unfriendly actions” were “aimed at ensuring uninterrupted functioning of key sectors of the economy”.

The export ban includes more than 200 products. The measures will last until the end of the year.

Western governments have imposed a string of sanctions on Russia, notably on buying oil, and against billionaire oligarchs seen as close to President Vladimir Putin.

About 48 countries will be affected, including the US and in the EU.

The order said that export exemptions can be made for Georgia’s breakaway regions of South Ossetia and Abkhazia and for members of the Russian-led Eurasian Economic Union.

Russia’s Prime Minister Mikhail Mishustin said the ban would include exports of goods made by foreign companies operating in Russia. Items include cars, railway carriages, and containers.

It comes as Russia’s former president Dmitry Medvedev warned that assets owned by western companies that have pulled out of Russia could be nationalized.

Firms have been leaving a mass or halting investment, including industrial and mining giants such as Caterpillar and Rio Tinto, Starbucks, Sony, Unilever and Goldman Sachs.

On Wednesday, Moscow approved legislation that took the first step towards nationalizing assets of foreign firms that leave the country.

And in a statement on Thursday Mr Medvedev said: “The Russian government is already working on measures, which include bankruptcy and nationalization of the property of foreign organizations.

“Foreign companies should understand that returning to our market will be difficult.” He accused foreign investors of creating “panic” for ordinary Russians who could now lose their livelihoods.

According to the most recent figures, Russia is the UK’s nineteenth largest trading partner, with trade between the two nations totaling £ 15.9bn over a year from the end of September 2020.

It’s an impressive-sounding list, but how much harm will these counter-sanctions actually cause?

The bulk of what western nations buy from Russia is made up of raw materials. Oil and gas, of course, but also metals like aluminum and nickel, not to mention potash and phosphates, widely used in fertilizers.

The conflict has already pushed the prices of these goods sharply upwards, amid fears supplies could be disrupted – and if they remain high, that will cause economic pain, particularly in Europe.

But a ban on the sale of railway cars and locomotives from Russia is unlikely to cause much hardship. Nor will restrictions on the sale of agricultural machinery, for example. These products are exported – but mainly to countries like Belarus and Kazakhstan.

The inclusion of vehicles on the list is a problem for the likes of Stellantis – the owner of Vauxhall, Peugeot and Citroen. It had been planning to export vans made in Russia to Europe and other parts of the world.

But overall, the impact of the counter-sanctions looks more symbolic than significant. Restrictions on exports of raw materials on the other hand – if Russia were to introduce them – could have a much more dramatic effect.

After Britain banned Russian-operated ships from its ports last week a retaliatory proposal to restrict foreign ships from entering Russian ports could also come into force.

President Vladimir Putin said on Thursday that there would be “negative consequences” for the world’s food markets due to the West’s sanctions because Russia is a major producer of agricultural fertilizers.

“It is clear that at such moments people’s demand for certain groups of goods always increases, but we have no doubt that we will solve all these problems while working in a calm fashion,” he said.