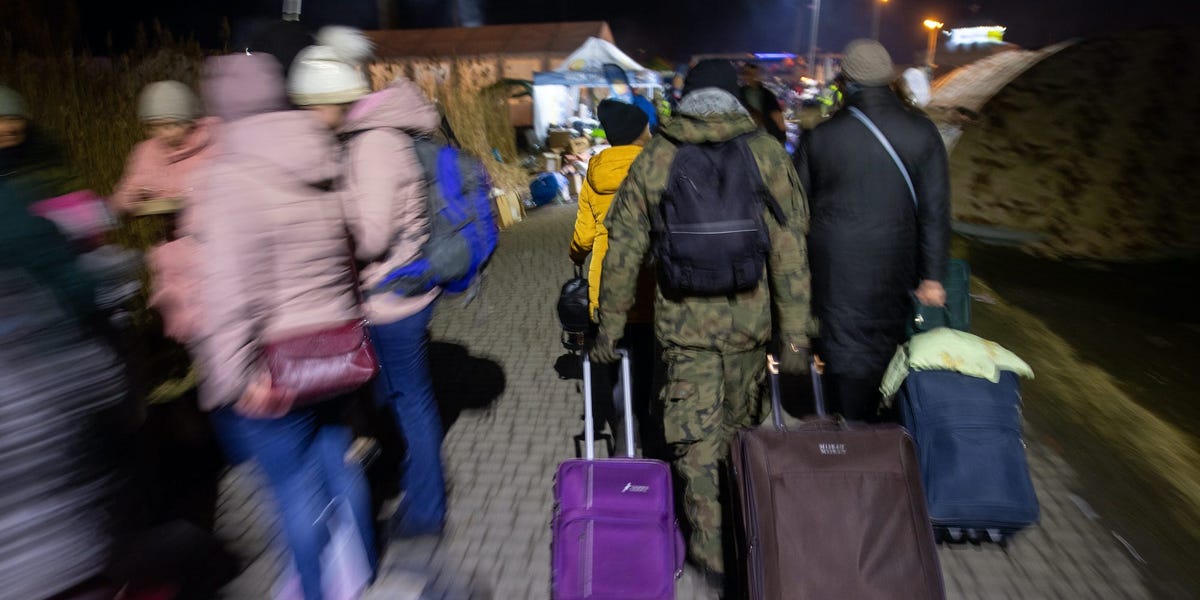 WARSAW, POLAND – Crushing Russia’s economy is imperative to ensure that Russian President Vladimir Putin does not take military action beyond Ukraine, a scenario that could potentially spark a much broader war, Polish lawmakers warn.

“There is a concern that Russia may go further if we do not stop the invasion in Ukraine,” Magda Biejat, a member of Poland’s parliament from the Left Together party (Partia Razem), told Insider. “There’s a belief among many experts and politicians that Putin is doing what he is doing because of the lack of reaction for what he did in Georgia, for what he did in Crimea. And that he felt he could get away with anything… He felt confident with the money he used to buy some Western politicians and influence some of the Western politicians and the discourse… We are dependent on the fossil fuels from Russia as well, so he felt that he could do whatever he wants. “

Russia invaded Georgia in 2008, and seized the strategically important Crimea peninsula by force from Ukraine in 2014, a stronghold from which Russia launched forces in its new war on Ukraine.

A “belief that Putin would stop if we made him our friend” shows “political naivete on the part of Western politicians,” Beijat said, adding, “He will not stop. We do not think he will. That’s why we press so hard on very hard sanctions on Putin’s Russia today. “

“We should be under no illusions: this could be just the beginning,” Morawiecki wrote in the Financial Times in late February. “Tomorrow Latvia, Lithuania and Estonia, as well as Poland, could be next in line … The war that Putin has unleashed on Ukraine is also a battle for the soul of the west.”

As a consequence of Putin’s unprovoked invasion of Ukraine, Russia has already faced a slew of historic, crippling economic sanctions that have seen the ruble sink to record lows. Russia has taken retaliatory steps in response. But Biejat underscored the need for countries to stop importing Russian gas, and to confiscate all of the wealth of Russian oligarchs, in order to truly isolate Putin.

Putin is a “bully” and “you can not speak peace with a bully,” Biejat said. The Russian president has to face a response in his “own language,” she added, which in this case should be “economic violence.”

The US this week moved to totally ban the import of Russian oil and gas – and the UK is mulling plans to do the same. Meanwhile, the EU has announced a plan to phase out reliance on Russian energy, but is facing mounting pressure to take more substantive and immediate steps. The US is far less reliant on Russian oil and gas than the EU, which President Joe Biden acknowledged in announcing the ban.

“This is the price of peace, and we have to be able to pay it,” Beijat said of the need to ban Russian oil and gas. The West and other countries in the long-term should work to invest in renewable energy to end the chokehold authoritarian leaders like Putin have over geopolitics, Beijat said, but in the short-term can look for alternatives to Russian energy to offset the consequences of barring oil and gas imports.

Maciej Konieczny, member of Poland’s parliament who’s also from the Left Together party, told Insider that Poland is “obviously” concerned that Putin could take military action against other countries in the region. The West needs to respond to Putin’s invasion hard enough to prevent a wider confrontation, while also avoiding steps that could provoke a “full-scale war between NATO and Russia,” he said.

“We are for all the possible sanctions for Russia, including stopping gas, oil – all fossil fuels. We are for sending arms to the Ukrainian people,” Konieczny said, but went on to say there are also “red lines” that need to be avoided – “especially direct NATO engagement in the world.”

Correspondingly, both Biejat and Konieczny said they oppose NATO setting up a no-fly zone, even though they understand why Ukrainian President Volodymyr Zelenskyy has repeatedly asked for this.

A no-fly zone would require NATO to intercept and likely shoot down Russian warplanes in Ukrainian airspace, and would effectively require the alliance – including the US – to become a combatant in the Ukraine war.

Biejat said she would also ask for NATO to get involved in the conflict if she was in the same boat as Zelenskyy, with Russian airstrikes pummeling Ukrainian cities. “I absolutely understand the position of Zelenskyy and the Ukrainian government,” Biejat said. “But as a frontier NATO country, we think that decision should not be taken lightly.”

Establishing a no-fly zone could catalyze a “huge conflict” on a scale the likes of which we can barely begin to imagine, she warned. NATO is an alliance of 30 countries, including nuclear powers like the US, that operates under the principle of collective defense – considering an attack on one and an attack on all.

“Direct NATO engagement in the war is a risk of not only world war, but also nuclear conflict,” Konieczny said.