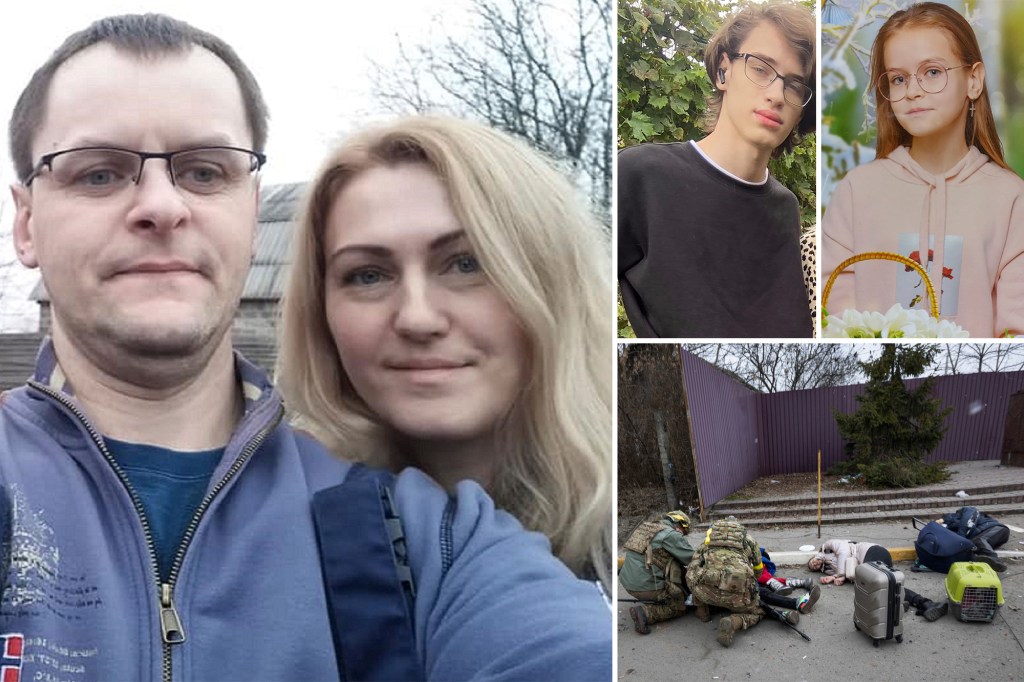 The grieving husband and father of the Ukrainian woman and two children killed while trying to flee Kyiv five days ago says his wife’s body is still lying in a body bag on the floor of an overflowing morgue.

Sergii Perebeinis arrived in Kyiv on Wednesday to bury his loved ones but said their funerals had to be postponed because the morgues are full of civilian victims of the war.

He said the body of his wife, Tatiana Perebeinis, was “lying in a black bag on the floor” of a morgue.

Perebeinis did not say where the remains of his children – Mykyta, 18, and Alisa, 9 – were.

The family were killed by Russian mortar fire as they tried to run across a damaged bridge in Irpin, just outside of Kyiv, on Sunday.

They died alongside another man, Anatoly Berezhnyi, 26, who was a church volunteer helping them escape.

The harrowing images of their bodies strewn across the street with their suitcases and a dog carrier sparked outrage across the world.

Perebeinis, who was not with his family because he was caring for his sick mother in separatist-held eastern Ukraine, said their dogs also died in the attack.

In an interview with the New York Times, Perebeinis said he learned of his family’s murder on Twitter.

Perebeinis said he knew the evacuation route they had planned to take after last speaking to his wife on Saturday night.

He said he had been trying to monitor his family’s location on a cellphone app. Perebeinis knew something had gone wrong when the tracker showed the phone was at a Kyiv hospital, and no one was picking up his calls.

Perebeinis then saw a Twitter post of the scene after reading reports that a family had been killed by a mortar strike on the route they’d planned to take.

“I recognized the luggage and that is how I knew,” he said of the blood-stained suitcases and backpacks the family was carrying. The items were photographed next to their bodies.

Perebeinis said he had since met with some witnesses who “handed me some of the personal items that were left lying on the street near the bodies.”

Tatiana was the chief accountant for SE Ranking, a Silicon Valley startup with headquarters in London and a large workforce in Kyiv.

Despite being urged to leave Ukraine by her company, she did not leave sooner over concerns of how to bring her mother, who has Alzheimer’s disease.

Tatiana’s mother and father were right behind the family when they were killed, but they were not harmed in the attack.

Perebeinis wrote on Facebook that he was finally able to return to Kyiv on Wednesday after four days “on my feet, thousands of kilometers of road.”

Speaking of his treacherous journey, he told the New York Times that he had to fly into Russia from eastern Ukraine so he could cross the land border into Poland.

He said he was questioned by Russian soldiers at the Russia-Poland border and feared he was about to be arrested – but was ultimately allowed to continue on.

Perebeinis said he told them: “My whole family died in what you call a special operation and we call a war. You can do what you want with me. I have nothing left to lose. ”