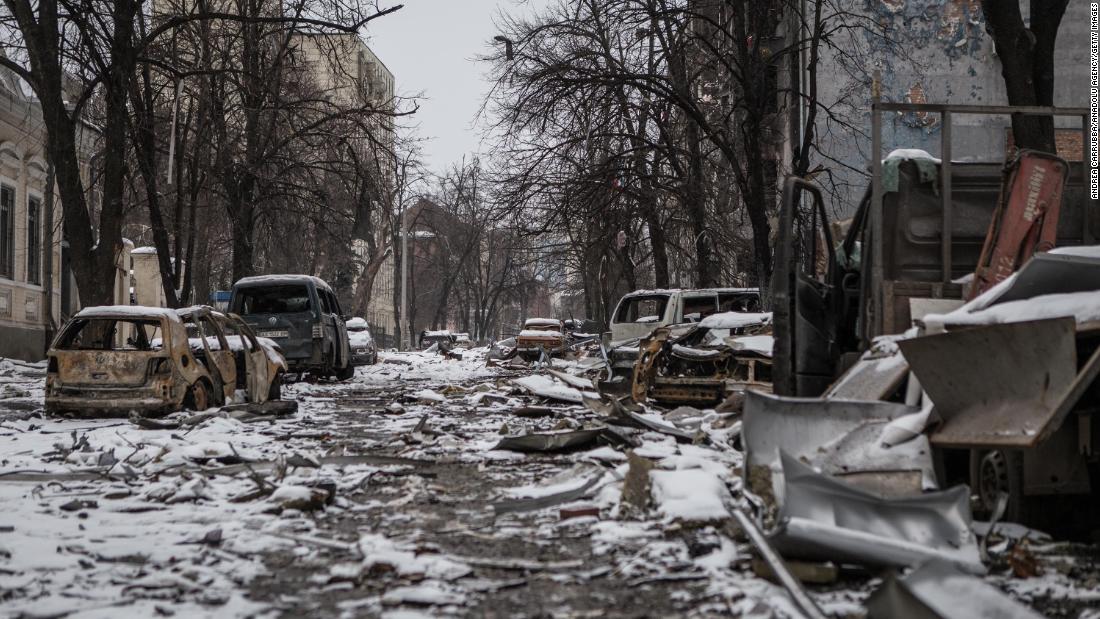 The negotiations fell apart almost as quickly as they came together.

But on Wednesday afternoon, the Pentagon bluntly announced it was opposed to the idea, which Defense Secretary Lloyd Austin conveyed in a call to his Polish counterpart.

“Secretary Austin thanked the minister for Poland’s willingness to continue to look for ways to assist Ukraine, but he stressed that we do not support the transfer of additional fighter aircraft to the Ukrainian air force at this time, and therefore have no desire to see them in our custody either, “Pentagon press secretary John Kirby said at a briefing.

The episode underscores how the US and its allies may be reaching the limits of what they can do to help Ukraine – while staying out of the conflict – and points to possible cracks in an alliance that has remained strongly unified in the early part of the war as members enacted stiff sanctions and provided security aid.

It also demonstrates that the Biden administration is still working to get on the same page.

The Pentagon’s rejection of the plan to provide jets came after Secretary of State Antony Blinken endorsed the idea earlier in the week, and one senior GOP lawmaker said there were divisions within the administration about what to do about the issue. Officials tell CNN that all of the public discussion about the plan make it less likely to happen, because it only increases Moscow’s ability to call any moves escalatory and adds to the jitters of countries like Poland nervous about being in the crosshairs of Russian President Vladimir Putin .

US officials were deeply frustrated that Poland made the offer public, saying that it appeared to be a play for a domestic audience to try to show they are doing everything they can to help Ukraine, well aware the logistics had not yet been worked out.

In Warsaw on Thursday, Vice President Kamala Harris sought to underscore the strength of the Polish-American alliance despite the flap that has played out this week.

“I want to be very clear. The United States and Poland are united in what we have done and are prepared to help Ukraine and the people of Ukraine, full stop,” Harris said alongside Polish President Andrzej Duda during a joint news conference.

Harris skirted directly addressing the issue during the news conference and instead underscored the military support the United States is already providing Ukraine short of air power, including antitank missiles, saying, “We’re making deliveries every day in terms of what we can do. “

Asked what more Ukraine could expect, Harris said, “That is an ongoing process and that is not going to stop to the extent there is a need.”

Kirby’s comments made clear there are concerns that more direct measures could escalate tensions with Russia even further and risk dragging NATO directly into the war.

One administration official said the US was concerned Russia could interpret jets flying into Ukraine from a NATO base as an attack.

The US and its allies have taken a number of steps to help Ukraine, including providing weapons and enacting sanctions like the US import ban on Russian oil that President Joe Biden announced this week – another step that Zelensky pushed for publicly. A senior defense official told reporters that most of the $ 350 million in security assistance approved for Ukraine last month has been sent.

The US and other NATO members have so far provided Ukraine 17,000 anti-tank missiles and 2,000 Stinger anti-aircraft missiles, according to a senior US official.

However, they have stopped short of implementing a no-fly zone and providing Ukraine with MiG-29 fighters despite numerous requests from Zelensky due to concerns about pulling the alliance into the conflict.

A number of lawmakers in Washington have also called for a no-fly zone, as Republicans and Democrats alike have publicly pushed the Biden administration to do more.

“Open the skies, give them the planes. These issues trump anything else we’re concerned about,” Rep. Mike Quigley, an Illinois Democrat and co-chair of the Congressional Ukraine Congress, told CNN’s Kate Bolduan on Wednesday.

“I can not stomach quibbling and drawing lines when Putin has already said the sanctions are war. We’re delivering lethal aid,” he added. “Do we honestly think Putin is going to draw a distinction between the Javelins and Stingers that are coming across killing Russians very effectively from jets protecting the skies above?”

On Wednesday, British Foreign Secretary Liz Truss said that the UK would supply air defense systems to Ukraine – while also saying it was not seeking to set-up a no-fly zone.

“The best way to help protect the skies is through anti-air weaponry, which the UK is now going to be supplying to Ukraine,” Truss said at a news conference at the State Department with Blinken.

Kirby said the Pentagon believed that the best way to support Ukraine was to provide them with anti-armor and air-defense systems, such as surface-to-air missiles and ground-based air defense systems. Adding aircraft to the Ukrainian fleet was “not likely to significantly change the effectiveness of the Ukrainian air force relative to Russian capabilities,” Kirby said.

“Therefore we believe that the gain from transferring those MiG-29’s is low,” the Pentagon spokesman said.

Earlier on Wednesday, Blinken – who had said on Sunday that the US was working with Polish officials to transfer the planes to Ukraine and “backfill” with US jets – said that the US was continuing to consult with Poland and other NATO allies on how to provide fighter jets to Ukraine.

“I think what we’re seeing is that Poland’s proposal shows that there are some complexities that the issue presents when it comes to providing security systems. We have to make sure that we’re doing it the right way,” Blinken said.

There are also a handful of other countries with the jets, including Slovakia, Romania and Bulgaria, and officials are not ruling out talks with those nations as they seek a way forward. One official said that Ukraine’s initial request was directed at Poland, plus those three countries, but that Poland was the only country initially willing to entertain a possible jet transfer.

Officials describe the issue as two-fold: a logistics problem of getting the jets to Ukraine, and a political problem of avoiding escalation with Russia. US officials described the Polish plan as failing to adequately address both.

Frustrations among Poland and US officials

Polish officials, for their part, have said they feel unfairly blamed for the delay in sending over fighter jets to Ukraine, sources told CNN.

After Russia invaded Ukraine on February 24, Polish officials told their American counterparts that they would be willing to give Ukraine their supply of MiG-29 jets. But given the possibility of ramped up aggression from Russia, the Poles told the US they would need replacement jets. The US said none would be available until 2024, given a number of nations, including Taiwan, were ahead of Poland in line for the American-made fighter planes. So Poland felt it had to put the idea on hold.

But public pressure on the Biden administration to send the jets ratcheted up considerably after Zelensky pleaded with US lawmakers to facilitate a transfer during a Zoom call on Saturday morning.

Prior to the call, US officials had downplayed the prospects of helping with a transfer of the MiG planes, which Ukrainian pilots have been trained to fly. Officials said they were focused mainly on other areas of security assistance, including sending anti-tank and anti-aircraft missiles. The logistical challenges of getting the aircraft to Ukraine appeared to some officials an unworkable challenge who questioned how effective the planes would be.

But Zelensky’s request on the call, which lawmakers described as impassioned, seemed to change the calculus. Immediately after the session ended, both Republicans and Democrats, including Senate Majority Leader Chuck Schumer, came out in support.

But US officials said the public backing left the administration with little choice but to publicly get behind the idea, even if some officials were skeptical. The US then began publicly messaging that the decision was Poland’s alone to make. Blinken told CBS on Sunday that the US had given the “green light” to Poland to send the jets, despite Poland emphasizing to the US that they would be unable to do so without proper replacements.

The comments deeply frustrated Polish officials, and – after days of feeling unfairly blamed for the delay – Poland’s Ministry of Foreign Affairs on Tuesday night made a surprise announcement that they would be willing to transfer the jets to the US, via Ramstein Air Base in Germany, for the US to then send directly to Ukraine. The US promptly rejected the idea.

Divisions inside the administration

Texas Rep. Mike McCaul, the top Republican on the House Foreign Affairs Committee, told CNN Wednesday following a classified briefing on Ukraine there appeared to be internal division in the Biden administration between officials at the Pentagon and State over how to handle Poland’s proposal.

“(The) secretary of defense had reservations about it about it and triggering … Article 5,” McCaul said. Asked if it was Blinken and Defense Secretary Lloyd Austin who were divided, McCaul said, “Yes.”

“I encouraged the secretary to do it when we were in Poland, and he agreed,” McCaul said.

White House press secretary Jen Psaki said Wednesday there was a “serious logistical bottleneck,” while noting that discussions are ongoing between the defense officials and their Ukrainian counterparts.

An administration official said the bilateral relationship between the two countries remains strong and that the additional US security assistance has continued to flow into Ukraine via Poland, including in the last day.

The senior defense official said Wednesday that the “majority” of the Ukrainian air fleet is still “intact and operable.” The Ukrainians have fixed-wing aircraft available to them, the official said, while noting the airspace above Ukraine remains “contested.”

“The airspace is contested,” the official said. “And as I said yesterday, the Russians have surface-to-air missile umbrellas that virtually cover the entire country.”