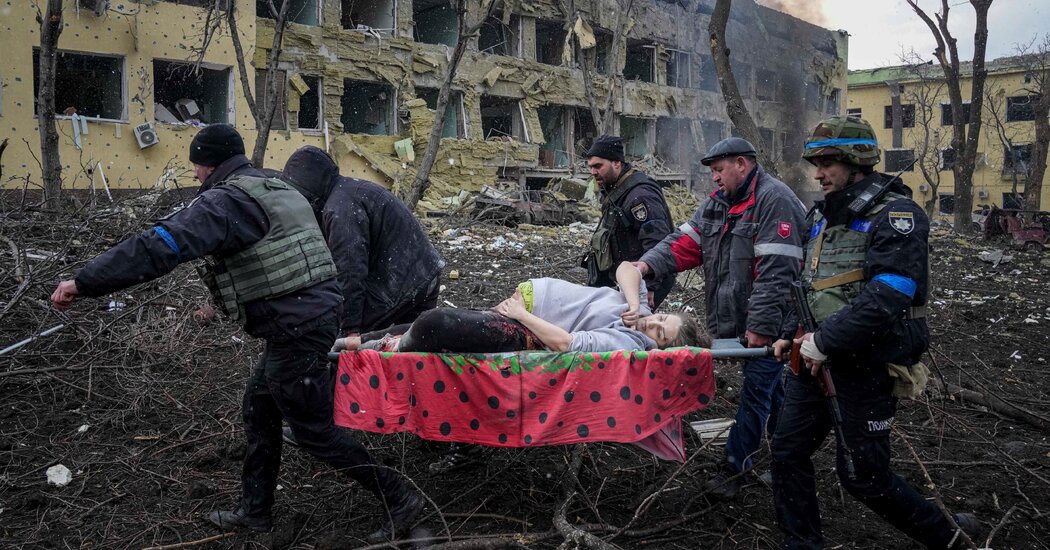 LVIV, Ukraine – Marina Levinchuk said she received an alarming text message from the local authorities in the besieged city of Mariupol several days ago, before she decided to flee. “If somebody dies in your family,” she said, recalling the message in her own words, “just put the body outside, cover it, tie up the hands and the legs and leave it outside.”

“That’s what’s going on in Mariupol now,” she said of the city, currently ringed by Russian forces pounding it with bombs, missiles and artillery, and hitting a maternity hospital on Wednesday. “There are just bodies lying in the streets.

“There is no water, no heating, no gas,” she continued in a video call on WhatsApp on Wednesday. “And they are collecting snow, melting the snow, and boiling the snow.”

It has been seven days since Russian forces encircled the city, an important port on Ukraine’s southern coast, and began to lay siege to the roughly half a million people living there. Most communications with the outside world were severed, leaving primarily those with access to satellite phones to alert Ukraine and the rest of the world to the increasingly dire state of affairs.

Having failed to defeat the Ukrainian army in the war’s first weeks, and encountering stiff resistance in major cities like Mariupol, Kharkiv and Kyiv, Russian commanders appear to be resorting to tactics used in previous wars in Chechnya and Syria: flattening cities with overwhelming and indiscriminate firepower.

A video uploaded to Facebook on Wednesday evening showed the center of Mariupol after an aerial bombardment. It looked like a wasteland, with tree branches singed, windows blasted out of entire apartment blocks and the destroyed maternity hospital.

Ukraine’s president, Volodymyr Zelensky, condemned the strike on the hospital, berating world powers for failing to stop the killing and echoing his calls for NATO to impose a no-fly zone over Ukraine.

“Mariupol. Direct Strike of Russian troops at the maternity hospital, ”he wrote in a Twitter post Wednesday afternoon. “People, children are under the wreckage. Atrocity! How much longer will the world be an accomplice ignoring terror? Close the sky right now! Stop the killings! You have power but you seem to be losing humanity. ”

In all, 17 people were injured in the hospital attack, including staff members and maternity ward patients, Pavlo Kyrylenko, the regional governor, told a Ukrainian television station.

Efforts to negotiate a cease-fire to give civilians a chance to escape have failed repeatedly. For three days, the prospect of relief reaching the city though a “humanitarian corridor” fell apart in a hail of mortar and artillery fire.

The fighting around the city has been some of the most intense of the war, residents who managed to escape the conflict say.

“There was shelling all the time. There was bombing, ”said Juliia Diderko, a 33-year-old journalist from Mariupol who slipped out of the city just after it was encircled by Russian soldiers. “If anyone can help, please do this,” she said. “Please do this right now. Because people are dying. ”

Residents are doing what they can to survive, for themselves and others in need, Ms. Levinchuk said. Trees are being cut down and food is being prepared outside, because there is no electricity or gas.

“All the neighbors, they are helping each other, sharing the food and the water if they have it,” added Ms. Levinchuk, 28, “and people are trying to survive like this.”

Mariupol has long been seen as a potential flash point, commanding a strategic land corridor between the Kremlin-backed breakaway enclaves in Ukraine’s east and Crimea, the territory annexed by Moscow in 2014. Control of Mariupol would not only enable Russia to send supplies and reinforcements to forces farther west, but would also cut Ukrainian shipping off from the Sea of ​​Azov and the Black Sea beyond.

The city’s mayor, Vadym Boichenko, has refused to surrender. He has also complained that it is difficult to count the dead because the bombing never stops.

The local authorities are planning to dig mass graves to accommodate all the bodies, including that of a 6-year-old girl named Tanya who they say died of dehydration on Tuesday after her mother was killed. It was, said Mr. Zelensky, “the first time in decades, apparently, since the Nazi invasion,” that a child died of dehydration in Mariupol.

Ms. Levinchuk, who left behind her husband of seven months and a newly renovated house, made it safely to a city in western Ukraine after 30 hours of driving. But her husband, Alexander, and her parents, who are in their late 60s, stayed behind, and she constantly fears for their lives and their health.

The windows in her parents’ house were blown out when their neighborhood was heavily bombed, she said, but “thank God my parents have a roof. ”

Alexander’s parents’ house on the left bank of the Kalmius River, where much of the initial bombing was concentrated, was completely destroyed, so they left along with Ms. Levinchuk. She worries about her parents, left there shivering in their windowless house with temperatures dropping below freezing most nights.

Explosions continue to rock the city, making a “very, very bad situation” for the elderly residents and those with disabilities, a member of Doctors Without Borders in Mariupol said in an audio message made available to The New York Times. “They can not find even food, and they can not create a fire for themselves to cook their food.”

On the diplomatic front. Vice President Kamala Harris began a three-day trip to Poland and Romania, as the United States and its NATO allies urgently try to find a way to help Ukraine defend itself without getting pulled into a wider war against Russia.

Conditions are also deteriorating for parents and their children, he said, “because they need much, much, more and different supplies and hygiene, and they do not find it anywhere now.”

May. Denis Prokopenko, with the Azov battalion defending the city, appealed to the international community for more help.

“Innocent people in Mariupol city are almost starving, this is happening now, it is happening in modern Europe,” he said in a video uploaded to Facebook. Explosions could be heard nearby.

“Attempts to organize a safe corridor for the evacuation of Mariupol failed because of several actions of the enemy,” he said, saying the Russian forces had shelled locations where civilians were assembling to board buses to leave the city.

“If a no-fly zone over Ukraine is not provided soon we will not be able to manage the supply of water and food, medicine, as well as to evacuate people safely,” he said.

Mariupol is only 35 miles from the Russian border, and its residents once regularly traveled there. Back in 2014, people in Mariupol watched the Maidan protests that ousted the country’s pro-Moscow president and felt uncomfortable, Ms. Levinchuk said.

“We did not want to go to Europe because we felt like we were a part of Russia, we were really close, “she said,” like brother and sister. “

But that began to change when war broke out in 2014 between Russian-backed separatists and Kyiv. The separatist forces held Mariupol for a month during that conflict, before the Ukrainian government took it back. That experience and seeing what happened in the nearby separatist enclaves and in Russia in the intervening years turned the city’s residents against Moscow, Ms. Levinchuk said.

“In these eight years, everything has changed because now, nobody wants to go to Russia,” she said. “We feel like we are Ukrainian.”

As the relationship between Mariupol and Russia has soured, so, too, has Ms. Levinchuk’s relationship with her brother Misha, 47, who moved to Russia in 2014 to get away from the war. Now, because of an information blackout in Russia, he has no idea what is happening to the city of their birth – making Ms. Levinchuk one of many Ukrainians whose Russian relatives have responded to news of the brutality of the invasion with denial.

“He’s calling to me and I’m quite surprised because he’s telling me that Russia tried to make people free,” she said.

“Misha, our Mom is dying without water, without heat, she has nothing,” she said she responded. “And you were telling me that Russia is trying to make Ukraine free?

“They made our mother free from electricity, from heating, from food, from water, ”she said, choking back tears. “And probably they will make us free of her life as well.”