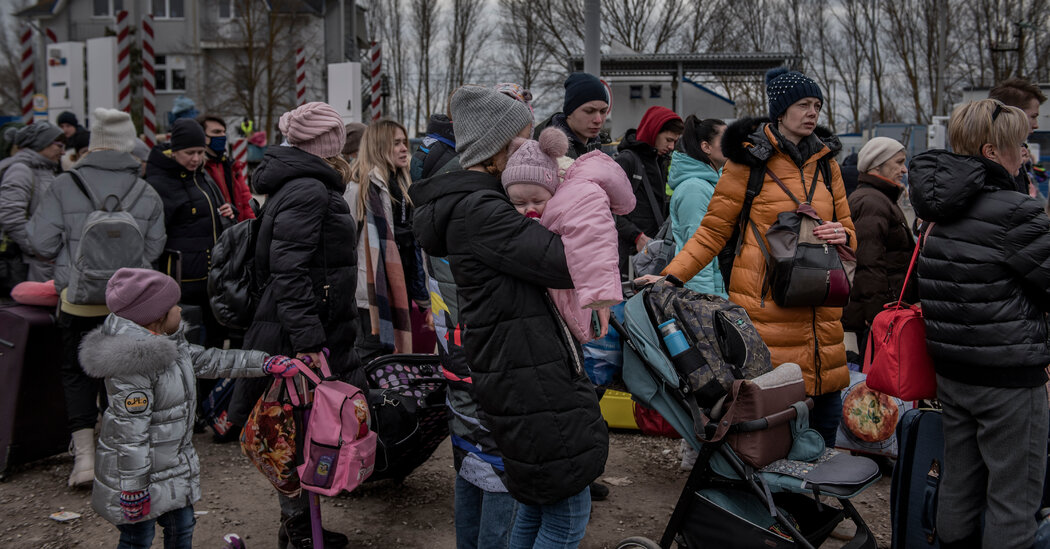 LONDON – Charlotte Shevchenko-Knight flipped through old family photo albums and toured the snowy neighborhoods of the Ukrainian capital when she visited her grandparents in Kyiv in January.

Then, their whole world changed.

On Monday, she spoke to them by video chat from her home in England after they crossed the border into Romania, fleeing the Russian military assault. She said she had never seen them so exhausted. Now her grandparents and an aunt are facing another nightmarish hurdle, said Ms. Shevchenko-Knight, 25. But this time, it is a bureaucratic and logistical one as they try to secure a visa under Britain’s new plan to issue them to Ukrainian families of British residents.

“It should just be: ‘You’re fleeing a war. We can welcome you, ‘”she said of the British response. “I do not understand. It’s just really inhuman. ”

The Russian attack has triggered the fastest displacement of people in Europe since World War II. More than 2 million Ukrainians have fled since last month, according to the United Nations, and many more are expected to join the exodus. Much of Europe has allowed the refugees to enter without visas, but Britain has required visas and an application process that is confusing many and slowing their arrival in Britain.

The website for information and applications has crashed or stalled repeatedly, people are struggling to find safe routes to the handful of application centers across Europe, and even when they do, they are unable to book the required appointments for weeks. The only application center in Ukraine is in the western city of Lviv near the Polish border, which had been inundated with people trying to flee the country. But it closed suddenly over the weekend.

On Tuesday, the government said it had issued visas to 500 Ukrainians so far. Many other European countries have welcomed thousands without visas, the bulk of refugees fleeing to Ukraine’s neighbors. Poland has taken in more than 1.2 million people.

Both Prime Minister Boris Johnson and Priti Patel, the home secretary, have heralded the program, claiming that up to 200,000 Ukrainians could eventually come to Britain. The government said that 17,700 applications had been started.

While opposition lawmakers and the British public have joined calls for dropping the visa requirement altogether, Mr. Johnson has so far rejected the idea, telling reporters on Monday that Britain was already a “very generous country,” but needed to vet the newcomers.

The system has drawn criticism from aid groups, legal experts, families and other European leaders who say the British response is paltry in the face of such an enormous crisis. They cited the limited eligibility and an opaque and confusing visa application process for people ill equipped under the circumstances to deal with that level of bureaucratic red tape.

Mala Savjani, an associate lawyer with Wilson Solicitors, a London firm that specializes in immigration and has been advising several Ukrainian families, said that the practical aspects of the program have been flawed since it was announced last week.

“It’s so contradictory to what these people are actually experiencing,” she said. “It is being thought of in terms of a visa application process, the actual circumstances that people are in – quite literally being in the middle of a war and fleeing – has not really been thought about properly.”

Under the program, extended family members of permanent British residents are eligible to enter the country. But they must submit an online form, then go to a visa center for biometrics. Once a visa decision is made, they receive documents to travel to Britain.

“I think it feels particularly difficult when there is such a different reaction going on in Europe,” Ms. Savjani said.

Ms. Patel was grilled in Parliament on Monday by opposition Labor lawmakers critical of the government’s response.

A petition to see the country waive all visa requirements had about 150,000 signatures from the public by Tuesday.

The Immigration Law Practitioners’ Association, in a letter to the British government last week, urged the lifting of visa requirements.

Gaps created by the piecemeal nature of measures, and the impracticality of many of the requirements for persons escaping a war zone, are causing confusion, uncertainty, further distress and impediments to access to safety in the UK for an already vulnerable group of people, ”The letter said.

France’s interior minister, Gérald Darmanin, criticized what he called a “lack of humanity” in Britain’s response – one of many barbs that the French and British governments have traded in recent years over the issue of migrants crossing the English Channel.

Mr. Darmanin, in a letter sent to Ms. Patel, said that the British response so far had been “totally inadequate” and noted that Ukrainian families in the French port of Calais were being told by British authorities to go to Paris or Brussels to apply for a visa.

Ms. Patel said Monday that the government was in the process of setting up a visa application center near Calais, which has long been a starting point for people trying to cross the English Channel. But then on Tuesday, the government said that center would instead be in Lille, France, some 70 miles away from Calais.

The Home Office said it had increased staffing at its application centers in the European Union, adding that it was working to process applications as quickly as possible.

But for many families, it is not quick enough.

Mary Fesenko, 24, grew up in Kyiv with her grandparents, but moved to England with her mother during high school.

“Every day, I see heartbreaking footage of familiar buildings and streets that carry my happiest childhood memories being destroyed,” she said, explaining how she scans videos to see if her family home has been shelled.

Her grandparents fled Kyiv and traveled to the relative safety of western Ukraine to get to the visa application center in Lviv, but soon realized it had closed and could not find anywhere to stay. From there, they managed to get to Poland, and met Ms. Fesenko’s mother who had flown in from England.

The only appointment she could book for them at the visa application center in Warsaw is a month away, Ms. Fesenko said.

Steve Valdez-Symonds, the refugee and migrant rights program director for Amnesty UK, said the approach is indicative of the government’s general attitude towards refugees and asylum seekers.

“We have had, for a very long time in this country, successive governments who have not really been welcoming to refugees,” he said.

“And it’s not even clear, really, whether what ministers say when the media and public spotlight is on them and they feel under pressure is really what they are committed to.”

Despite the messages of a generous welcome, recent policies suggest otherwise, he added, pointing to the thousands of Afghan refugees still languishing in hotels months after being evacuated as one example.

This weekend, Khrystyna Daines’ parents and grandparents, who live in Lviv and are applying for a visa to join Ms. Daines and her husband in England, tried to go to the visa application center in the city only to find it closed.

Her husband, Thomas Daines, 32, said that most people he speaks with do not seem to understand that it is British citizens, like him and his wife, who have to bear the pain of being separated from family.

“I think these have probably been the worst weeks of our lives,” Mr. Daines said. “If we were in a neighboring country, we could just get in our car and bring them back.”