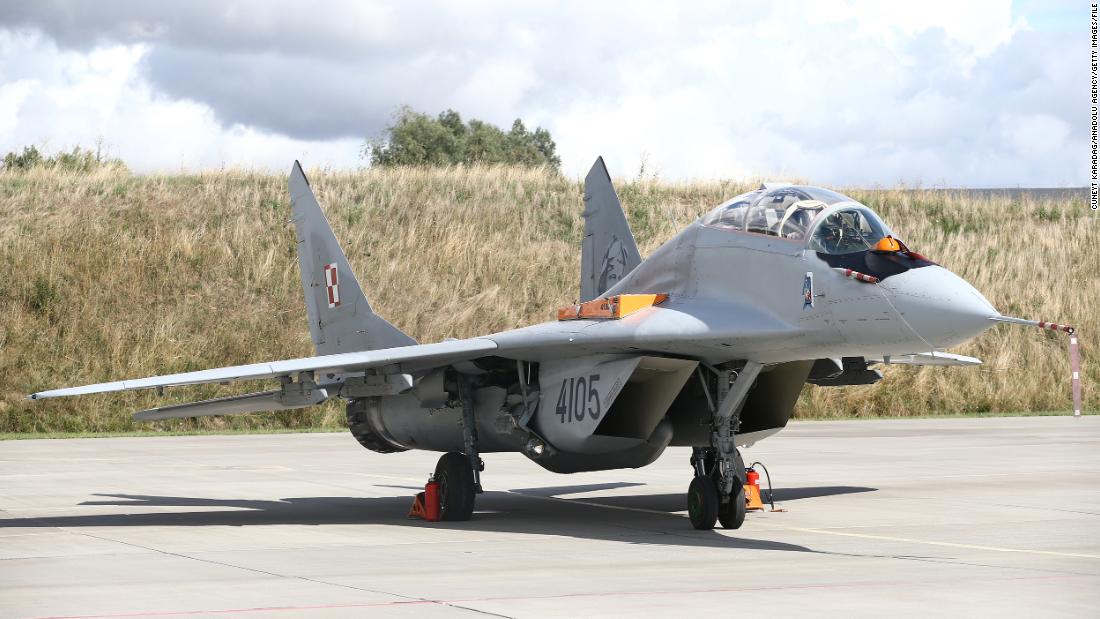 Pentagon press secretary John Kirby said in a statement that the Pentagon did not believe Poland’s proposal was “tenable,” just hours after Polish officials released a statement saying the government was ready to deploy all of its MiG-29 fighter jets to US Air Force’s Rammstein Air Base in Germany so they could then be provided to Ukraine in its fight against Russia.

“It is simply not clear to us that there is a substantive rationale for it,” Kirby said. “We will continue to consult with Poland and our other NATO allies on this issue and the difficult logistical challenges it presents, but we do not believe Poland’s proposal is a tenable one.”

Kirby said that the decision about transferring Polish-owned planes to Ukraine was “ultimately one for the Polish government,” adding that the proposal shows the complexities that the issue presents as Russia has made threatening statements over arms being provided to Ukrainians for use against Russian forces.

The idea as laid out by Poland was too risky, Kirby said, as the US and NATO seek to avoid an outright conflict between the alliance and Russia.

“The prospect of fighter jets ‘at the disposal of the Government of the United States of America’ departing from a US / NATO base in Germany to fly into airspace that is contested with Russia over Ukraine raises serious concerns for the entire NATO alliance,” Kirby said.

While Ukrainian President Volodymyr Zelensky has pleaded for more aircraft amid the Russian invasion, the offer had not been discussed with the US before making it public and Polish officials did not bring it up with Secretary of State Antony Blinken when he was recently in Poland either.

US officials have privately weighed sending aircraft to Ukraine but have repeatedly noted the difficult logistical challenges of doing so.

Poland’s surprise announcement complicates what had already been a high-stakes visit by Vice President Kamala Harris, who is due to land in Warsaw late Wednesday.

Harris had been expected to discuss the fighter jet issue while in Poland, according to officials. The White House had previously said it was in discussions with the Polish government about a plan for Poland to supply Ukraine with its Soviet-era fighter jets and the US to backfill the planes with F-16s.

Harris is still scheduled to depart Wednesday morning for Poland, but now there are intensive talks within the administration about how to work with Poland to come to some sort of agreement that allows the jets to reach Ukraine.

A top State Department official said Tuesday that Poland did not consult with the United States prior to issuing its statement.

“I saw that announcement by the government of Poland as I was literally driving here today,” Undersecretary of State for Political Affairs Victoria Nuland said during a Senate Foreign Relations Committee hearing.

Nuland noted that the US and Poland have been in consultations for a couple of days on the possibility, but added she had come to the hearing directly from a meeting “where (she) ought to have heard about.”

“So I think that was actually a surprise move by the Poles,” Nuland told lawmakers.

The Polish government said in a statement Tuesday that it is “ready to deploy – immediately and free of charge – all their MiG-29 jets to the Ramstein Air Base and place them at the disposal of the Government of the United States of America . “

“At the same time, Poland requests the United States to provide us with used aircraft with corresponding operational capabilities. Poland is ready to immediately establish the conditions of purchase of the planes,” the statement said.

Speaking to US lawmakers virtually on Saturday, Zelensky asked for American support to facilitate the transfer of Soviet-era fighter jets from Eastern European nations to Ukraine, where pilots have been trained to fly them and could use them to attempt to control the skies as Russia conducts its war against the country.

By Saturday evening, US and Polish officials were in discussions about a potential agreement to supply the country with American F-16 fighter jets in exchange for Poland sending its Russian-made jets to Ukraine.

On Monday, a Pentagon spokesman said the Department of Defense was in “interagency” discussions to “examine” the possibility of the US sending fighter jets to other European countries if those countries choose to send fighter jets of their own to Ukraine.

Prior to the apparent dismissal of Warsaw’s proposal by the Biden administration, members of Congress appeared supportive of the move. During Tuesday’s Senate Foreign Relations Committee hearing, Democratic Sen. Ben Cardin asked Nuland to ensure the Biden administration notifies Congress if there are going to be any delays getting F-16s to Poland.

Two European diplomats told CNN on Tuesday, prior to the Pentagon statement, that the complicated logistics behind the idea of ​​Poland giving the jets to Ukraine had not yet been finalized.

The Polish announcement came after some Polish officials expressed frustration about how forward leaning the US was on this subject over the weekend, the sources said.

“In fact, we’re talking with our Polish friends right now about what we might be able to do to backfill their needs if, in fact, they choose to provide these fighter jets to the Ukrainians. What can we do? How can we help to make sure that they get something to backfill the planes that they’re handing over to the Ukrainians? We’re in very active discussions with them about that, “Blinken said Sunday.

A Polish official told CNN they believed Harris’ trip would be a good time for the US to announce more details about aircraft transfers, but the Pentagon statement suggests such a possibility is unlikely.

Other countries that are in talks with the US about taking part in similar transfers are conducting the talks quietly, without raising expectations, said a central European diplomat.