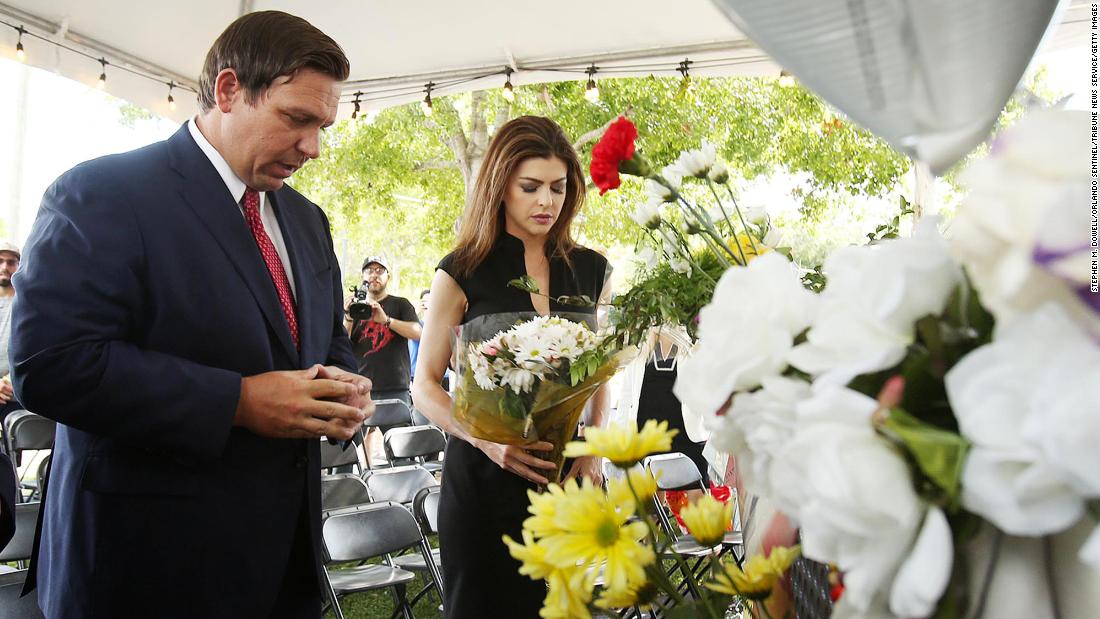 For Florida’s LGBTQ community, the day brought a glimmer of optimism that this new Republican leader might listen to their concerns, said Rep. Carlos Guillermo Smith, an Orlando Democrat and the state’s first openly gay Latino lawmaker. The governor, Smith said, “appeared to be extending an olive branch to the LGBTQ community.”

“An olive branch,” Smith added, “which he has since rescinded, stomped on and destroyed.”

Far from realizing a new era of bipartisan inclusivity, Florida under DeSantis has become ground zero for the cultural clashes that have pitted the country’s LGBTQ community against GOP leaders. Gay, lesbian, bisexual and transgender Floridians are increasingly on edge and on defense against DeSantis and the state’s Republican-controlled legislature.

Florida’s embrace of these fights – the latest example of which is legislation that would limit instruction about “sexual orientation or gender identity” in schools – has coincided with DeSantis’ ascent from a fresh-faced leader to the most popular elected official among conservatives and a potential presidential contender. Some, like new rules for transgender athletes, have become fodder in political speeches and fundraising pitches.

“DeSantis is likely to run for president of the United States and a lot of this is posturing on his part,” said Sen. Jeff Brandes, a Republican who voted against the bill. “It’s all red meat. It’s not red meat for the state of Florida but for the national base. It’s all about staying in the headlines.”

DeSantis has already signaled his support for the legislation restricting classroom discussion, which is headed to his desk after passing the Republican-controlled Senate on Tuesday. The bill passed the Florida House of Representatives in February.

“How many parents want their kindergarteners to have transgenderism or something injected into the classroom instruction?” DeSantis said at a recent press conference.

Called the “Don’t Say Gay” bill by opponents, it has ignited widespread student walkouts, fierce and emotional debate in Florida’s halls of power and condemnation from the White House.

Opponents say the legislation, which was tacked on to a bill about parental rights, will lead to bullying and scare teachers from creating classrooms accepting of all students. Nowhere else do Florida statutes dictate which topics schools cannot teach, they say, meaning this would be a new and unique distinction that singles out sexual orientation and identity.

“They want it to stigmatize LGBTQ young people and parents,” said Nadine Smith, executive director of Equality Florida. “That is the point.”

Proponents of the bill say it has been misrepresented, insisting it would not ban students from mentioning their same-sex parents or teachers from discussing identity if questions arise. DeSantis on Monday confronted a reporter who called the legislation the “Don’t Say Gay” bill when asking a question.

“Does it say that in the bill?” DeSantis said. “I’m asking you to tell me what’s in the bill because you are pushing false narratives.”

But the bill’s sponsor, state Sen. Dennis Baxley, seemed to acknowledge on Monday that he was motivated to address what he described as a growing trend of children coming out as gay and transgender. Baxley said he was concerned kids were “experimenting” with sexual orientation to become “celebrities” and questioned if schools were encouraging it.

“Why is everybody now about coming out when you’re at school?” Baxley said. “There really is a dynamic of concern of how much of this are genuine types of experiences and how many of them are kids trying on different kinds of things they hear about.”

State Rep. Anna Eskamani, an Orlando Democrat, called Baxley’s comments “homophobic garbage” on Twitter that validated concerns about the intention of the bill.

In his first race for US House of Representatives in 2012, DeSantis won the endorsement of the late Phyllis Schlafly, a notable Christian activist and opponent of gay rights. Schlafly called DeSantis “strong on marriage issues” in her endorsement.

DeSantis, an early member of the conservative Freedom Caucus, voted in line with most Republicans on social issues during his more than five years in the House. In his second term, he earned a 0% rating from the Human Rights Campaign, the country’s largest LGBTQ advocacy group.

When the US Supreme Court legalized same-sex marriage, DeSantis did not release a public statement on the ruling, according to an Internet archive of his congressional and campaign websites. But a month later, he joined 171 other Republicans in cosponsoring a bill that prevented the federal government from taking action against anyone who discriminated against same-sex couples based on their “religious belief or moral conviction.”

As a candidate in 2018, DeSantis appeared at a Republican primary forum hosted by the Florida Family Policy Council, a Christian-right organization, where his bonafides as a social conservative were put to the test. When Fox News commentator and moderator Frank Luntz asked about transgender bathroom designations, a hot-button topic at the time, DeSantis seemed dismissive. “I would leave it as it is and stay out of that,” he told the crowd.

“Getting into the bathroom wars, I do not think that’s a good use of our time,” he added.

John Stemberger, the president of the Florida Family Policy Council, endorsed DeSantis’ opponent after the forum.

LGBTQ advocates took Desantis’ remark at the forum as a potentially positive sign. DeSantis was sworn in as governor as national sentiments on LGBTQ issues had shifted towards acceptance and equality. In Florida, the majority-Republican legislature had often stymied attempts by the state’s most conservative lawmakers to pass bills wading into the transgender bathroom debate and denying film incentives for movies featuring gay characters. By 2019, a bill to end discrimination of LGBTQ people in Florida workplaces had attracted 15 Republican sponsors.

For a time, DeSantis focused his efforts on the environment and education – and then the arrival of the coronavirus. But as his star rose during the pandemic, DeSantis leaned into the culture wars that were spreading across the country.

In April of last year, DeSantis announced he intended to sign a controversial bill banning transgender athletes from participating in women’s and girls’ scholastic sports. He signed it on June 1, the first day of Pride Month, drawing outrage from LGBTQ advocates.

Then, days before the five-year anniversary of the Pulse shooting, DeSantis vetoed $ 150,000 in state funds that would have provided counseling for Pulse survivors and nixed another $ 750,000 to create housing programs for homeless gay and transgender youths. Later in the year, the Florida Department of Education removed links to federal anti-bullying resources, including ones addressing treatment of LGBTQ kids.

A department spokesman said the pages were removed because the Biden administration had “altered the content at these links into advocacy platforms,” ​​though he declined to say what changes were objectionable. A review of the pages showed two noticeable additions after 2021: a button to file a complaint and “LGBTQ Youth” was changed to “LGBTQI +.”

Stemberger, now an enthusiastic backer of the governor, said he thinks DeSantis as a candidate was likely focused on national issues at the time and was less versed in local matters. But as a governor, DeSantis has taken notice that many mothers “have risen up in a national movement” to challenge school boards on these issues.

“This stark increase in government schools attempting to assault the hearts and minds of our children has caused Gov. DeSantis to rethink his position on the importance of these issues,” Stemberger said.

Smith, of Equality Florida, said she has attempted over the years to bring her concerns to DeSantis, to no avail.

“We’ve asked him to meet with LGBTQ students, parents and kids,” she said. “And he has never taken us up on that offer.”

Bryan Griffin, a spokesman for the governor, declined to address questions about DeSantis’ approach to LGBTQ issues because he said it “conflicts separate issues, and, frankly, frames a false premise about the nature of the bill” the legislature recently passed.

“Especially among 5-, 6-, 7- and 8-year-old children, the governor holds the common-sense stance that conversations at this age about sexuality are the purview of a child’s parents,” he said.

Brandes proposed an amendment that attempted to remove the perceived stigmatization of LGBTQ people in the bill while still meeting DeSantis’ objective. His amendment banned instruction of “human sexuality” for children in third grade and under instead of singling out sexual orientation or gender identification. It had support from Democrats and LGBTQ advocates.

But his Republican colleagues voted down the amendment. Brandes told CNN that the governor’s office opposed it as well because it did not “cover conversations about gender.”

Griffin did not respond to questions about the office’s conversations with Brandes.

‘This is a coordinated attack on LGBTQ youth’

DeSantis’ first visit to the Pulse memorial followed a blunder.

In June 2019, DeSantis issued a proclamation marking the three-year remembrance of the tragedy, but it failed to mention that nearly all of the victims were gay and Latino. He called it an unintentional mistake and his office blamed a recently departed employee. (The employee, who denied being at fault, is gay.)

After, Rep. Smith, the Orlando lawmaker, invited DeSantis to tour the memorial.

Brandon Wolf, a Pulse survivor who lost a close friend that night, recalled shaking DeSantis’ hand at the site and urging the new governor to blaze a different path than his Republican predecessors on LGBTQ issues.

“I challenged him to do more than just show up one day with flowers but open avenues to another kind of relationship,” Wolf said. “And he said he was interested in forging a relationship with those impacted by the tragedy.”

“Unfortunately, Gov. DeSantis seems to have succumbed to pressure from the furthest right wing in his own base,” Wolf added.

LGBTQ advocates say the latest fight in Florida comes at a time when they face a record number of Republican bills in state legislatures targeting transgender Americans – limiting their participation in athletics, curbing teaching of gender identity and preventing children from gender affirmation surgery. Meanwhile, in some states, including Florida, schools have removed books with gay characters and themes from libraries.

Like DeSantis, Abbott and Noem have been mentioned as future presidential contenders for the GOP. DeSantis’ office would not say if he would support a Texas-style crackdown on youth conversion therapies in Florida.

“This is a coordinated attack on LGBTQ youth that is happening nationwide and it has multiple fronts,” said Cathryn Oakley, the state legislative director at the Human Rights Campaign.

Charles Moran, the president of Log Cabin Republicans, a group representing gay conservatives with several Florida chapters, noted that DeSantis has not attempted to relitigate past LGBTQ victories, such as same-sex marriage. Rather, Moran said DeSantis is in step with many Americans. For example, a Gallup poll last year found 62% of Americans said transgender people should have to compete on teams with athletes that correspond with their “birth gender.”

Moran said he worked with the bill sponsor to remove language that would have forced teachers to out gay and transgender students to their parents. Log Cabin Republicans do not oppose the bill in its current form.

“When you drag kids into it, there is an awakening,” Moran said. “That’s why you’re seeing DeSantis move on it.”