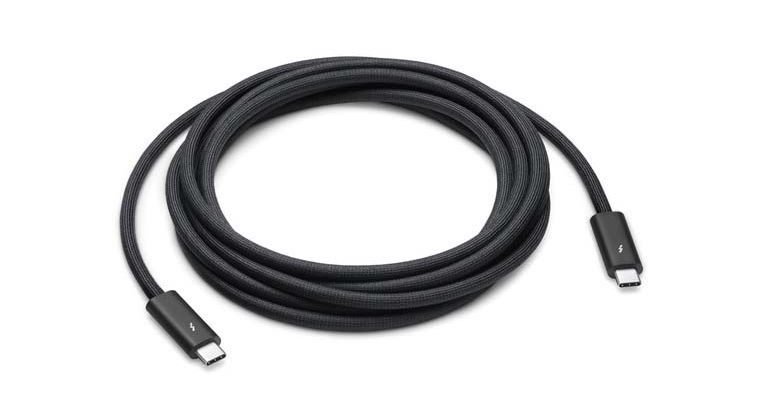 Apple is listing a new 3-meter Thunderbolt 4 Pro cable on its store for $ 159, which is arguably far too much for a cable. But given the scarcity of other Thunderbolt 4 cable options over 2 meters in length, it might be your only option.

The listing coincides with the announcement of Apple’s new Mac Studio, which includes four Thunderbolt 4 ports on its back to connect to displays and other devices. Apple’s also selling a 1.8-meter cable for $ 129 that ships in two to three weeks. Apple’s 3-meter Thunderbolt 4 Pro cable says it’s coming soon. ‘

Apple’s 3-meter Thunderbolt 4 cable will not have much, if any, competition when it arrives. Whether it’s Belkin, Caldigit, CableMatters, or Plugable, no major cable manufacturer (that I’ve found) sells a Thunderbolt 4 cable over 2-meters in length. For a very specific kind of user, Apple’s $ 159 cable might genuinely be the best option.

Apple’s $ 129 1.8-meter Thunderbolt 4 Pro cable, meanwhile, is entering a much more crowded market. Caldigit’s 2-meter alternative costs $ 74.99, Belkin’s costs $ 69.99, Plugable has one on sale for $ 69.95, and Cable Matters has one for $ 59.99. Depending on your needs, you might even be able to save some money with a Thunderbolt 3 cable since the standard supports 5K. Apple’s 5K Studio Monitor, for example, ships with a single Thunderbolt 3 port and a 1-meter Thunderbolt cable in the box.

The Thunderbolt 4 standard is less than two years old at this point, so the lack of availability of 3-meter options is likely to abate over time. But if you want to be an early adopter, than it looks like you might have to pay the Apple tax.