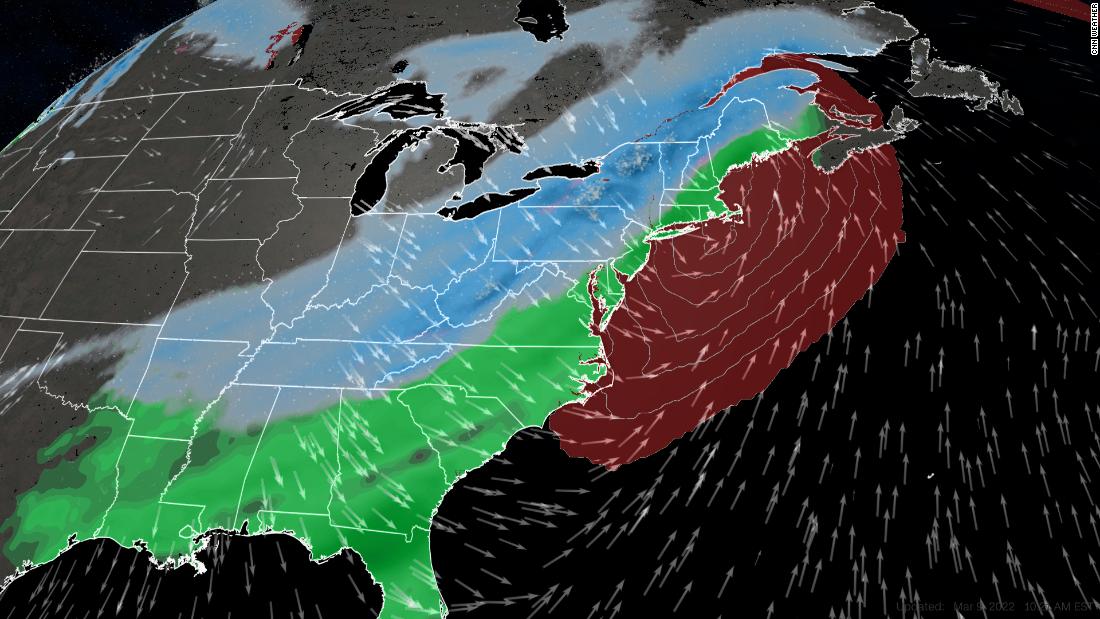 A combination of extremely strong winds and snow promises to wreak havoc over the Northeast as the cyclone reaches hurricane-level strength off the Atlantic coast.

Blizzard-like conditions and widespread wind damage are prominent concerns across the interior of the Northeast.

“All model guidance has surface wave (the storm) rapidly intensifying as it tracks somewhere between the I-95 corridor to Cape Cod, then along or just off the Maine coast as a sub 970 mb low,” said the National Weather Service in Boston .

A 970 millibar low would be equivalent to a Category 2 hurricane.

The low will continue to strengthen overnight Saturday, which, in conjunction with very cold air moving into the area, “will support strong to perhaps damaging winds as the low exits southern New England late Sat into Sat night,” the weather service said.

The strongest winds are forecast to be off the coast of the Northeast in the Atlantic Ocean, with winds up to 70 mph possible. However, cities including New York City, Boston and Washington, DC, can expect extremely powerful wind gusts ranging from 30 to 50 mph, which raises concerns for falling trees and power outages across the region.

Along with powerful winds, parts of New England will see heavy snow with accumulations of 4 to 8 inches possible in upstate New York and northern Pennsylvania.

“There is increasing confidence that precipitation will generally be in the form of all snow across far northern Maine, especially the northern Maine woods, where significant snow accumulations will be possible Saturday into Saturday night,” the weather service in Caribou said.

Get weekly updates from our team of meteorologists

The combination of significant snowfall in these areas with the strong winds from the bomb cyclone will create the potential for hazardous blowing and drifting snow in the area. This could lead to whiteout conditions and make travel extremely dangerous.

Snow totals along the Atlantic coast are forecast to remain low, with only 1 to 3 inches expected.

The current forecast is calling for 1/2 ” to 1 “of snow across New York City, metro New Jersey, and central and western Long Island,” the weather service in Upton, New York, said.

Higher elevations of Massachusetts are expected to see 2 to 3 inches, with only a dusting to 1 inch expected near Boston, according to the weather service.

The South will also feel the return of winter

The storm will take aim at the Deep South and Southeast first. Cities including Atlanta, Birmingham, Alabama, and Charleston are expected to see heavy rainfall and possible thunderstorms as the system moves in from Friday night to Saturday morning.

This precipitation will change into a wintry mix in some locations and eventually snow as the cold front causes temperatures to plummet well below average.

Snow is forecast to be seen across parts of many Southern states including Alabama and Mississippi. Even Louisiana could see a few flakes mixed in with the rain.

“Currently in the forecast we have a large area of ​​the region mainly eastern Arkansas and west Tennessee with 1 to 2 inches of accumulation for the Friday night into Saturday morning time frame,” the weather service in Memphis, Tennessee, said.

The fast nature of the storm and the well-above-freezing temperatures will keep snow accumulations to a minimum and limit hazards to travel across the mid-South, according to the weather service in Little Rock, Arkansas.

As the system moves out Saturday into Sunday, extreme winter temperatures will grip the eastern US.

Keep that winter coat out for a little while longer

The start of this week brought widespread warm temperatures across much of the East, with some even setting record high temperatures.

But another wave of arctic air following the cold front will bring temperatures to the other end of the spectrum.

Check how cold your temperatures will plunge

“Behind the front, much below normal temperatures are expected from the lower Mississippi Valley through the Ohio Valley on Saturday, and into much of the East by Sunday, with daytime highs 20-30 degrees below normal in some places,” the Weather Prediction Center said.

Low temperatures across the South are forecast to get down into the teens this weekend, with wind chills around zero degrees in some areas.

There is hope for those ready for more of that spring weather in the near future, as warmer temperatures should return early next week.