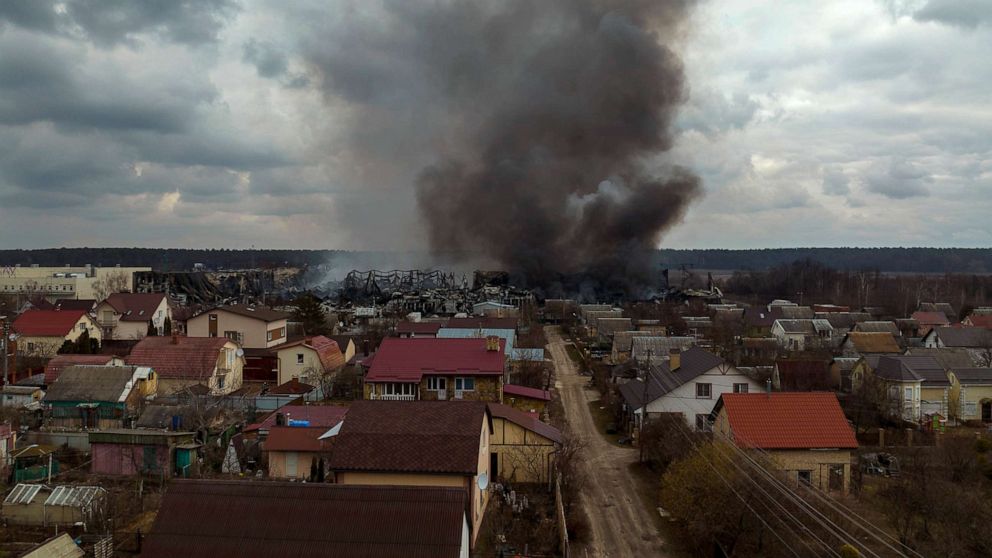 Ukraine President Volodymyr Zelenskyy has made repeated and passionate pleas now for the US and NATO to implement a ‘no-fly’ zone over his country and ground Russian warplanes – through intimidation or force.

But he’s also made another ask – one that President Joe Biden’s administration said it is working with allies like Poland to facilitate – for fighter jets to replenish the Ukrainian air force.

“We know where these Soviet planes are stationed, which countries host them, and we asked these countries,” Zelenskyy told ABC News’s David Muir in an exclusive interview Monday, adding Biden “can do more, I’m sure he can, and I would like to believe that, that he’s capable of doing that. “

US officials, including Secretary of State Antony Blinken, have said the administration is working to address this, including by possibly replenishing Poland’s air force with US jets.

But amid growing pressure from US lawmakers to do so, the White House and Pentagon said Monday it’s not as simple as handing over keys – especially as Russian leader Vladimir Putin eyes growing Western military aid for Ukraine as inching toward a direct role in the war .

“We are not, certainly, preventing or blocking or discouraging Poland – that is, they are a sovereign country. They make their own decisions. But it is not as easy as moving plans around,” White House press secretary Jen Psaki said Monday .

“It’s just a discussion about the possibility of, should there be a nation that would want to give aircraft to the Ukrainians and would ask for a backfill from the United States – should that happen, what would that look like?” Pentagon spokesman John Kirby said shortly after.

Putin has warned that any country attempting to implement a ‘no-fly’ zone over Ukraine would “immediately” become “party to the military conflict” – the kind of slide to a wider war that US and NATO officials said they’re working to avoid.

But US officials are concerned that increasing US military support to include warplanes could be seen as a step too far for Putin, too.

In dramatic fashion, the US and several Western countries have shifted what aid they’re willing to provide, including shoulder-fired anti-aircraft missiles known as Stingers. Germany, long opposed to providing lethal military aid to war zones, has moved to boost its defense spending and agreed to provide Stingers as well.

Whereas the Obama administration once held off on providing anti-tank missiles known as Javelins, the Biden administration and other US allies have provided thousands in just the last couple weeks, according to a US official.

But so far, that line has been drawn at military aircraft and advanced missile defense systems.

“In addition to assisting getting the Ukrainians fighter aircraft and letting them fly out of Polish airfields with full NATO protection, we need to provide them medium- and long-range air defense systems,” said Mick Mulroy, a former top Pentagon official and retired CIA officer. “The Stinger system is very effective, but its range is limited. Russian planes are flying at altitudes that make them out of reach.”

Polish officials have expressed strong opposition and deep concerns about precisely that, with the fear that Putin would strike Polish airfields for supporting Ukrainian fighter jets.

Psaki brushed aside Putin’s role, telling reporters, “We’re not waiting for Vladimir Putin’s advice on what we’re going to do here as it relates to backfilling planes.” But she added again it’s Poland’s right to decide.

For now, it seems Warsaw is the one opposed. The Polish prime minister’s office called reports the country would provide Soviet-era MiG-29 fighter jets and Su-25 attack aircraft “FAKE NEWS‼ ️” in a tweet Sunday – adding, “Poland will not send its fighter jets to #Ukraine as well as allow to use its airports. We significantly help in many other areas. “

It’s possible the US could provide enough protection to calm Polish nerves and enough support to make it worth Poland’s while, according to some analysts.

Chief among them would be giving Poland more F-16 fighter aircraft. But that’s a lengthy process that could leave Poland without air cover as it waits on those US replacement jets.

Either way, Zelenskyy and other Ukrainian officials said they need air support now, including during a briefing Zelenskyy held with more than 300 U.S. lawmakers and staff on Saturday that bolstered bipartisan support for his government.

In the days since, several top lawmakers have publicly urged the Biden administration to ensure Ukraine gets more warplanes, including several top Democrats openly pressuring the president.

“Asking them to provide their own aircraft, especially as Russia’s military aggression edges closer to their own borders, would be unthinkable except in the direst circumstances. Unfortunately, that is the situation the world faces. Extraordinary times require extraordinary measures and sacrifices,” he wrote to the cabinet officials.

Meanwhile, some 70% of the latest package of US military assistance – which totaled $ 350 million and brought aid in the last year to $ 1 billion – is already in Ukrainian hands, Blinken said Monday.

But he conceded Russia’s military outguns and outmans Ukraine’s, saying the Kremlin has “the ability to continue to grind down the Ukrainian military and, of course, to take horrific actions against the Ukrainian people, including attacking civilians.”

ABC News’s Sarah Kolinovsky contributed to this report from the White House and Luis Martinez from the Pentagon.