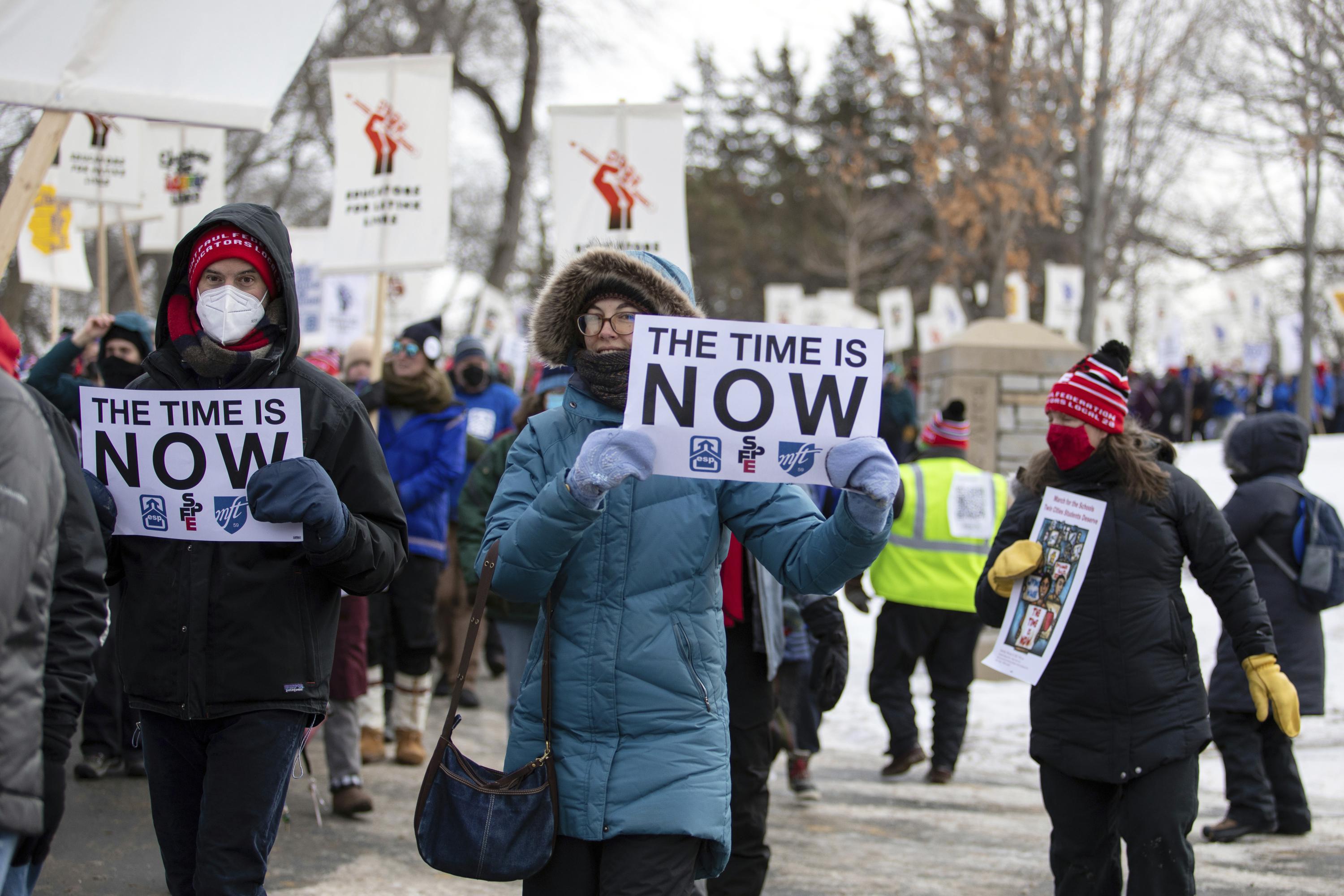 ST. PAUL, Minn. (AP) – Teachers in the Minneapolis School District walked off the job on Tuesday in a dispute over wages, class sizes and mental health support for students coping with two years of the coronavirus pandemic, at least temporarily pausing classes for about 29,000 students in one of Minnesota’s largest school districts.

Union members said they could not reach agreement on wages, especially a “living wage” for education support professionals, as well as caps on class sizes and more mental health services for students.

The school district called the news disappointing but pledged to keep negotiating. Callahan said the union was also willing to resume bargaining, but no talks were scheduled.

Teachers in the neighboring St. Paul School District, with about 34,000 students, announced a tentative agreement late Monday night to avert a strike that had also been scheduled to start Tuesday.

“This agreement could have been reached much earlier. It should not have taken a strike vote, but we got there, ”local union President Leah VanDassor said in an announcement of the deal.

State mediators facilitated the negotiations between administrators and union leaders in both districts.

National labor leaders say teachers and support staff across the country are experiencing the same sorts of overload and burnout challenges due to the COVID-19 pandemic, but no other large districts were on the verge of a strike. School district officials have said they’re already facing budget shortfalls due to enrollment losses stemming from the pandemic and can not spend money they do not have.

The possibility of a strike earlier weighed on parents already stretched by the disruption of the pandemic.

Erin Zielinski’s daughter, Sybil, is a first-grader at Armatage Community School in southwest Minneapolis. She and her husband support the teachers, though she said she worries whether the union’s requests are sustainable.

Zielinski said her family is fortunate. She and her husband can count on support from their parents during a strike, and while he has had to return to the office, she still has some flexibility to work remotely. Her plan if teachers strike? “Survival,” she said and laughed.

“You kind of become immune to it, between distance learning, and home school, it’s now a way of life, unfortunately,” she said. “My husband and I will piece it together.”

For St. Paul schools, Gothard outlined the proposals in a statement Sunday night, saying the district offered to add language to the contract to keep average class sizes at their current levels, hire an additional four school psychologists, one-time cash payment of $ 2,000 for each union employee using federal stimulus funds, and to increase pay for the lowest-paid educational assistants.

“This comprehensive settlement offer addresses the union’s priorities, does not add to the projected $ 42 million budget shortfall next year, and most importantly, keeps our students, teachers and staff in the classroom,” Gothard wrote.

Minneapolis has about 3,265 teachers, while St. Paul has roughly 3,250 educators. The average annual salary for St. Paul teachers is more than $ 85,000, while it’s more than $ 71,000 in Minneapolis. However, the districts also employ hundreds of lower-paid support staff who often say they do not earn a living wage, and those workers have been a major focus of the talks. The Minneapolis union is seeking a starting salary of $ 35,000 for education support professionals, with union officials saying it’s essential to hire and retain people of color.