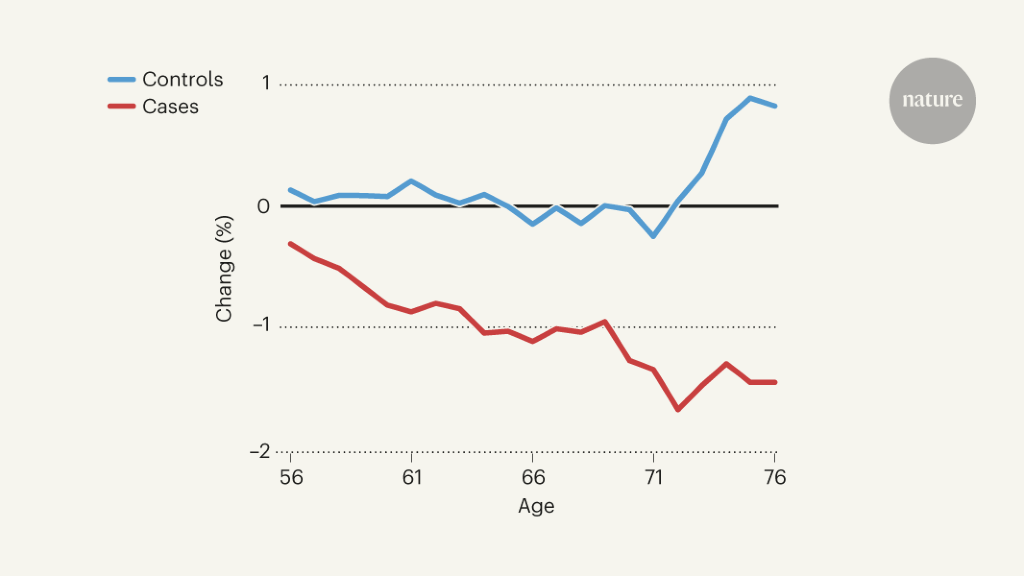 Myriad neuropsychiatric symptoms have been attributed to infection with the SARS-CoV-2 virus1,2, from lost sense of smell and taste to headaches, memory problems and more. Knowing precisely how the brain is changed by infection would help us to understand these debilitating symptoms. Large-scale brain-imaging studies can provide quantitative measures of subtle changes – but conducting these studies presents a formidable challenge. Writing in NatureDouaud et al.3 describe 785 sets of brain scans that mark the first step in tackling this challenge head-on.

The UK Biobank is a large-scale biomedical database and research resource that gathers and shares genetic and health-related information for about half a million people (www.ukbiobank.ac.uk). Of those, 100,000 participants have undergone, or will undergo, a magnetic resonance imaging (MRI) session4. In 2020, the biobank launched a COVID-19 repeat-imaging study (see go.nature.com/3gvj6qe) in which participants who had completed their medical-imaging session before the start of the pandemic returned for an identical, second scan session.

The biobank has released the data from 785 sets of these ‘before and after’ scans, from people between the ages of 51 and 81; 401 of the participants had tested positive for COVID-19 between the two sessions, and 384 had not. The variant that infected each person was unknown, but the scans were conducted before the emergence of the Omicron variant. Douaud et al. explored these data, comparing pre- and post-pandemic scans to distinguish the effects of infection from those caused by pre-existing conditions.

Viral effects on the brain are likely to be so subtle that they can only just be detected by current imaging methods. It was essential that the UK Biobank’s brain MRI scans were consistently collected, well calibrated and of high quality4,5. All of the biobank’s imaging centers have identical MRI machines and methods for using them to collect the brain scans4. In addition, Douaud and colleagues used benchmark data from a separate group of biobank participants who had undergone longitudinal brain scans before the pandemic6. That the researchers adhered to such high standards is important because – unlike established medical tests, such as those that measure blood glucose levels – industry standards for capturing and analyzing complex brain-imaging measurements are still evolving.

The UK Biobank neuroimaging session includes six types of MRI scan, each of which reveals distinct features of brain structure and function5. An automated processing pipeline extracts specific features called imaging-derived phenotypes (IDPs) from the scans5. Each IDP conveys different information – the volume or microstructural tissue properties of distinct brain structures, for instance, or the strength of neural connectivity between pairs of brain regions. More than 2,000 IDPs are generated for each person from each scan session. In addition, Douaud et al. developed a set of IDPs to test the hypothesis that areas of the brain involved in taste and smell would be altered, given that these senses are often impaired in COVID-19. They used computational models from a previous biobank imaging study7 to help disentangle any brain changes related to COVID-19 infection from aging-related changes in brain structure and function that occurred between scans.

These heroic efforts revealed significant differences between the people who had tested positive for SARS-CoV-2 (the case group) and those who had not (the control group). For instance, those in the case group exhibited a decrease in thickness and tissue contrast in some areas of the brain cortex compared with those in the control group (Fig. 1); such changes are often associated with worsening brain health. The case group also displayed increases in markers of tissue damage in brain regions connected to the smell and taste systems. No differences were detectable between the groups’ primary olfactory pathways, but this is to be expected – these are notoriously challenging regions for MRI owing to imaging artefacts that occur at air – tissue interfaces. Whole-brain analyzes confirmed these results and showed diffuse atrophy in other brain regions.

It is surprising that Douaud and colleagues identified these brain changes, given that most people in the case group experienced mild to moderate symptoms of COVID-19. Even when the authors excluded from their analysis the small number of people who required hospitalization, the results did not change. The researchers provide supporting evidence for the specificity of their findings by showing that similar changes did not occur in a group from the benchmark repeat-imaging study who contracted non-COVID-19-related pneumonia between scan sessions.

One of the greatest challenges in a study of this kind is appropriately matching people in the case group with people in the control group. This is crucial because case – control mismatch could contribute to a false-positive outcome, whereby infection is ascribed as the causal factor for a change when, in fact, there are other co-varying causes at play – circumstances that increased the changes of people in the case group contracting COVID-19, for example, or baseline differences in their brains. Complicating matters further, participants could be misclassified, owing to false-positive COVID-19 tests in the case group, or asymptomatic infection and false-negative tests in the control group. However, such misclassification should skew the results towards smaller differences between the two groups, rather than exaggerating differences.

Douaud and colleagues addressed this challenge head-on. When participants were first recruited, the authors assessed whether those who had tested positive and those who had not were matched in terms of sex, ethnicity, date of birth, and location and date of the first imaging-assessment clinic. The researchers then reassessed these criteria in their final cohorts after excluding all participants who had incomplete data. They also assessed whether the groups were matched in terms of time lapse between the two scan sessions, socio-economic status and relevant pre-COVID-19 health assessments, such as blood pressure, body-mass index and alcohol intake.

They did confounder analyzes using the extensive, non-imaging characterization data available in the UK Biobank – indices of neuropsychiatric disease, for instance – to show that, both individually and using a clustered approach, no differences between the case group and the control group, in terms of pre-existing characteristics, could account for the reported brain changes. The authors also carefully showed that no differences between IDPs in the baseline imaging session could account for their findings. However, there is no way to exclude the possibility that the reported differences are due to some other, unconsidered differences between the groups.

There is much more work to be done to extract all the useful information from this valuable data set. The COVID-19 repeat-imaging study is ongoing, with 2,000 scans due to be released overall. It is to be hoped that participant-specific health information about acute and chronic COVID-19 symptoms will become available at that time – this could help researchers begin to explore how brain changes relate to specific COVID-19 symptoms. Nonetheless, the UK Biobank’s data sharing and Douaud and colleagues’ release of their analysis code (see go.nature.com/3uu4r5k) serve as an open invitation to join the effort to understand what is causing neuropsychiatric symptoms in COVID-19, and how we might prevent and recover from them.

The author declares no competing interests.