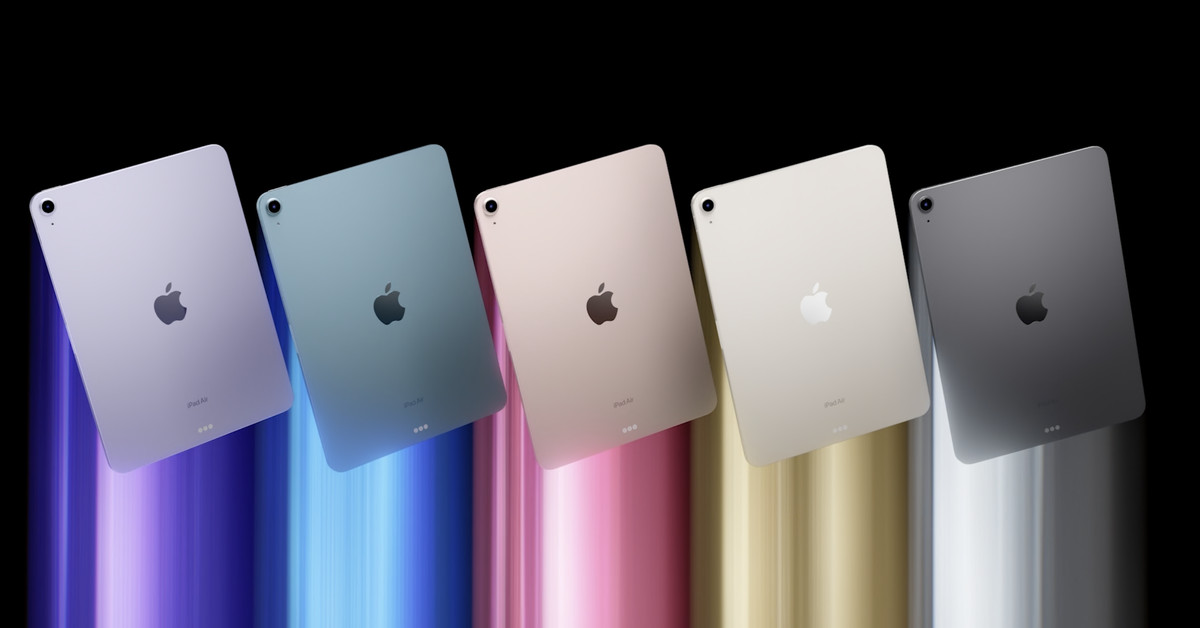 Apple has announced an update to the iPad Air a year and a half after it gave the tablet an iPad Pro-style redesign. Much of that redesign is still intact, but the new iPad Air model has been updated with a faster M1 processor, first seen in Apple’s Macs. It also supports 5G, and the USB-C port is up to twice as fast with 10Gbps of data transfer speeds.

It’ll be available starting at $ 599 for the Wi-Fi only model, rising to $ 749 for the Wi-Fi and Cellular version. It’ll come with 64GB or 256GB of storage, and available colors include gray, pink, purple, blue, and a silver / gold cross Apple is calling “starlight.” Pre-orders open this Friday, and the tablet will be on sale from March 18th.

Apple says the iPad Air’s M1 processor, which was also included in its latest iPad Pro, has an 8-core CPU that’s up to 60 percent faster than the A14 Bionic processor found in last generation’s model. It has an 8-core GPU with two times the graphics power of its predecessor.

Its front facing camera has also been updated to use a 12-megapixel sensor (up from 7-megapixels last time around), and it now supports Apple’s Center Stage feature that’s designed to automatically keep you in frame while on calls. The rear camera has a resolution of 12-megapixels, same as last time. The new iPad Air’s 10.9-inch screen has a peak brightness of 500 nits, and HDR support, but there’s no mention of ProMotion. The iPad Air has landscape stereo speakers.

Like its predecessor, the new iPad air is compatible with the $ 129 Apple Pencil, which magnetically attaches to its size, as well as the $ 299 Magic Keyboard. It’ll also work with the $ 179 Smart Keyboard Folio and $ 79 Smart Folio covers. It uses Touch ID built into its power button as its biometric security.

The iPad Air sits below the iPad Pro in Apple’s tablet lineup and was last updated in 2020. Last time around, the Air featured a smaller display with a lower refresh rate and a slower processor than the Pro. But many of the other features of the iPad Pro were still available on the Air, including a USB-C port and support for Apple’s Magic Keyboard and Pencil. It made the Air an excellent lower-cost alternative to the Pro. If anything, that’s even more the case this time around now that it’s also powered by an M1 chip.