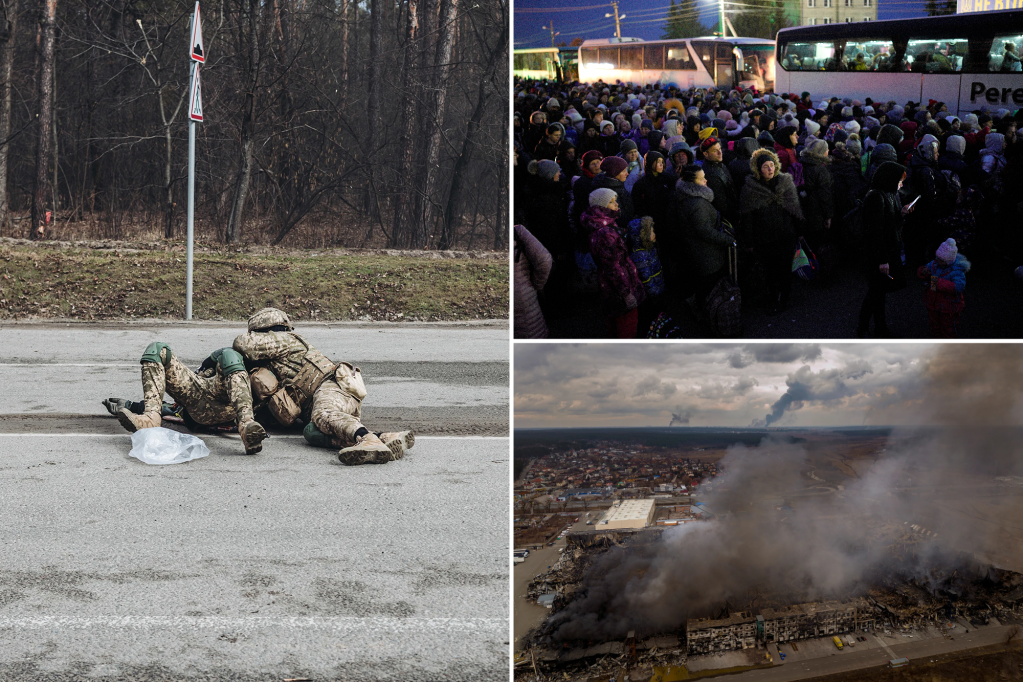 Russia ramped up its attacks on Ukrainian cities Sunday night into Monday, as officials warned the aggressors were preparing to assault the capital of Kyiv.

Kharkiv, the country’s second-largest city, and Chernihiv and Mykolaiv – two cities surrounding Kyiv – faced increased fire from artillery shells as the war entered its 12th day with no end in sight.

“The enemy continues the offensive operation against Ukraine,” the General Staff of the Armed Forces of Ukraine said in a statement.

Russian forces “began to accumulate resources for the storming of Kyiv”, the statement added.

Moscow announced a limited ceasefire starting Monday morning and humanitarian corridors to allow civilians to evacuate Kyiv, Mariupol, Kharkiv and Sumy. It was not clear how long the ceasefire would last.

Russia’s attacks – coming by air, land and sea – have forced more than 1.5 million refugees to flee from Ukraine.

The death toll from the conflict remained unclear Monday. The United Nations had confirmed a few hundred casualties, but warned the actual tally was likely much higher.

About eight civilians, including a family, were killed by Russian shelling Sunday in the Kyiv suburb of Irpin, according to Mayor Oleksander Markyshin.

Moscow’s continued assault comes as a third round of talks with Ukrainian leaders is planned for Monday.

Many Ukrainians have heeded President Volodymr Zelensky’s call to fight the Russian intruders – who were met with heavy resistance, especially north of Kyiv.

“You should take to the streets! You should fight! ” he said Saturday on Ukrainian television. “It is necessary to go out and drive this evil out of our cities, from our land.”

Some 20,000 foreign volunteers have also heeded Zelensky’s appeal for assistance and signed up to fight in Ukraine.

Russian forces have made significant gains in southern Ukraine and along the coast, though many of its efforts have stalled, including a military convoy to Kyiv’s north that has been almost motionless for days.

In the southern port city of Mariupol, food, water, medicine and other supplies were running dangerously short. There have already been two failed attempts to evacuate civilians from the city.

In another address to his country, Zelensky blasted Russian troops as murderers and derided Western governments for what he called their “silence” on the invasion.

The West has broadly backed Ukraine, offering aid and weapon shipments and slapping Russia with vast sanctions. But no NATO troops have been sent to Ukraine.

Zelensky has so far unsuccessfully pleaded with the US and NATO to implement a no-fly zone over Ukraine so that his forces would be able to battle Russian troops invading his country and to stop the bombing of “non-militarized zones.”

Secretary of State Antony Blinken said the US had given Poland the “green light” to send fighter jets to Ukraine. He added that the US was working on “what we might be able to do to backfill their needs if, in fact, they choose to provide these fighter jets to the Ukrainians.” Nearly all of Ukraine’s military aircraft have been destroyed, reports say.

The California Democrat said the House is also “currently exploring” legislation that will further isolate Russia on the world stage.

“Our bill would ban the import of Russian oil and energy products into the United States, repeal normal trade relations with Russia and Belarus, and take the first step to deny Russia access to the World Trade Organization,” Pelosi said.

Both TikTok and Netflix cut off service to Russia on Sunday. Facebook and Twitter have already been blocked in Russia.

American Express announced it would suspend operations there and in Russian-allied Belarus. Also, two of the “Big Four” accounting firms, KPMG and PricewaterhouseCoopers, said they were pulling out of Russia.