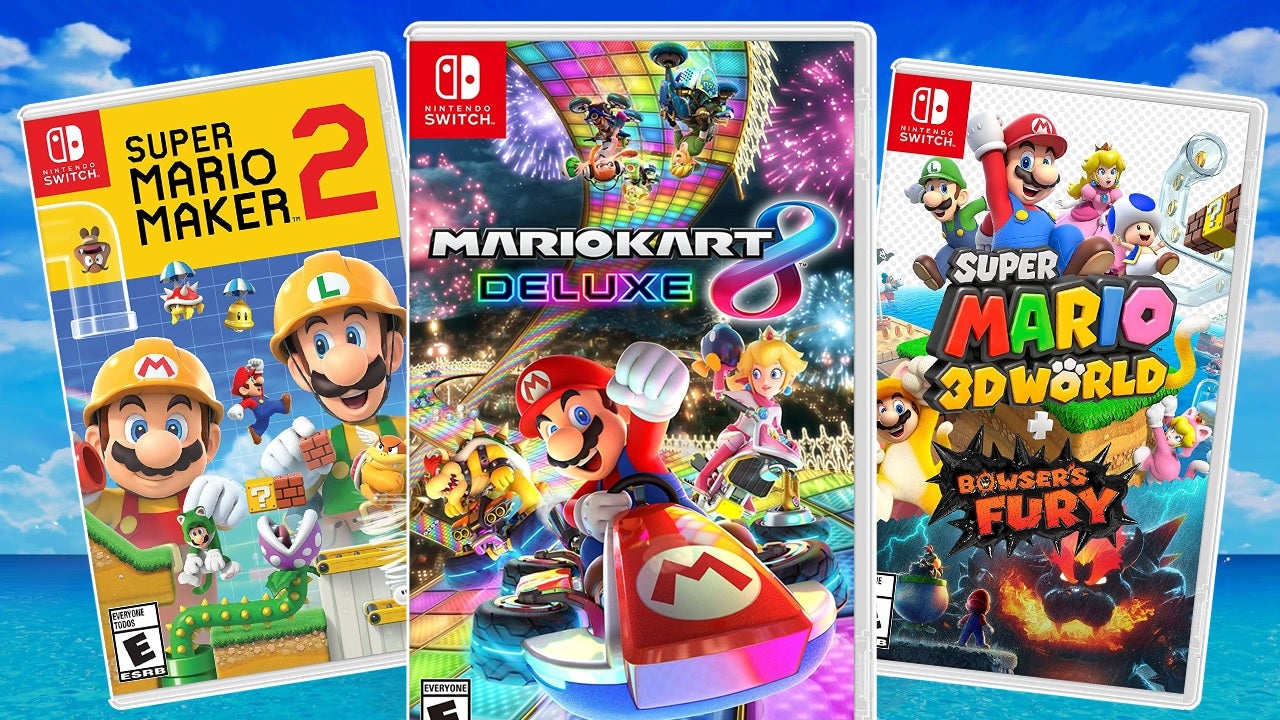 Mario Day officially lands on March 10, but some of the video games have already started. Now is a great time to stock up on some of the best recommended titles for your Nintendo Switch. If you’re not a Switch owner, fret not because both the standard and OLED models are currently available on Amazon. In other deal news, save 10% off Lowes gift cards at Best Buy. We haven’t seen a discounted Lowes gift card sold at Best Buy in over a year! Better yet, there’s no membership to sign up for or any hoops to jump through in order to get this deal.

Save up to 40% off popular Nintendo Switch video games featuring the titular hero, including Mario Kart 8 Deluxe, Super Mario Maker, Super Mario 3D World, and more. There are a few discounted Switch titles that star some other iconic Nintendo masctos as well, like Legend of Zelda: Breath of the Wild and Luigi’s Mansion 3.

Save $ 5 off any game at the eShop with this digital gift card from Amazon. Use it to pick up Kirby and the Forgotten Land when it releases on March 25 or the newly released Triangle Strategy. Or you can just hold onto the card and use it during the next eShop sale, which will probably happen on March 10 (Mario Day).

You save a lot of money by being your own handyman, and a quick trip to a home improvement store could save you hundreds, if not thousands, compared to hiring a professional. Gift card discounts like these are just icing on the cake, but they come along rarely, so it’s best to stock up when you see one of these deals. Best Buy has both $ 25 and $ 100 Lowes gift cards, and they’re both 10% off today.

Nintendo Switch OLED In & Out of Stock

The newest Nintendo Switch OLED model has been incredibly difficult to find throughout the holiday season. It’s back today on Amazon for a very limited time. This Switch features a larger, more vibrant OLED touchscreen display, an upgrade to the terrible OG kickstand, an ethernet port on the docking station, and of course new Joy-Con colors.

Ending Today: 3 Months of Paramount Plus for $ 3

Halo TV series premieres on March 24 only on Paramount Plus

3 Months of Paramount Plus for $ 3

It’s the 1 year anniversary of Paramount Plus (previously known as CBS All-Access). To commemorate this milestone, Paramount is offering new subscribers a discounted rate of $ 1 / mo for the limited ad plan (normally $ 5) or $ 2 / mo for the ad-free plan (normally $ 10). Catch up on Paramount exclusive shows and movies like Picard, Star Trek Discovery, and Infinite with Mark Wahlberg. The Paramount exclusive Halo TV series premieres on March 24 as well. This limited time offer ends on March 7.

One of the biggest advantages of the Nintendo Switch Online membership over PS Plus or Xbox Game Pass Ultimate is that it is way, way cheaper. That said, any extra discount helps. Nintendo Switch Online is required for online play in games like Super Mario Kart or Splatoon, downloading custom maps in Super Mario Maker 2, playing free retro SNES games, saving your game data to the cloud, and much more.

If you need every bit of storage space, the biggest hard drives offer the best bang for your buck. In this case, Amazon is offering a WD Elements 16TB hard drive for only $ 269.99, the lowest price we’ve seen so far this year. That averages out to only $ 16.87 per terabyte.

This particular LG Ultragear monitor is a pretty high-end 27 “gaming monitor at a very reasonable price. The 2560×1440 resolution is nice and sharp on the 27” display, yet it’s forgiving enough to allow mid-range cards like the RTX 3060 Ti or RTX 3070 to handle it beautifully, even at the maximum 144Hz refresh rate for many games. The Nano IPS display is LG’s version of QLED, and it allows for better color handling and higher contrast ratio. It’s also certified G-SYNC compatible, like any high-end gaming should be.

If money is not an object, OLED TVs are considered the best TVs you can buy right now. Compared to traditional LED LCD TVs, they offer better image quality, deeper blacks, better contrast ratio, wider color gamut, and super fast response times. They excel at both gaming and viewing 4K HDR content. In terms of general usability, they consume less power and they’re very thin and sit flusher against the wall. Amongst OLED TVs, the LG C1 is often considered the flag bearer; it’s the one TV that all other OLED TVs are compared against. The LG OLED TV boasts several generations of optimizations under its belt and the latest C1 model is future proofed with technology like HDMI 2.1 (4K @ 120Hz), variable refresh rate, G-SYNC, the newest LG A9 Gen4 processor and a revamped webOS smart TV interface.

The RTX 3080 is way more powerful than the previous generation’s best video card, the RTX 2080 Ti, and is the best recommended video card for 4K gaming. The RTX 3080 Ti and RTX 3090 are the only cards that are (very slightly) more powerful, but they cost hundreds of dollars more. The RTX 3080 is paired with an AMD Ryzen 9 5900 CPU, which is one of the best processors you can get at the moment, whether it be for gaming or for workstation purposes. It’s been upgraded with liquid cooling as well. The rig is ready to go out of the box with 16GB of DD4-3200MHz RAM and a generously sized 1TB M.2 PCIe NVME SSD. Do not worry, even the power supply is up to snuff with an ample 1000W rating.

The Simpsons cabinet is a 3: 4 replica of the original arcade, making it approximately 4 feet tall. That said, a matching riser is included which raises the height by another 1 foot, giving you the option of both sitting and standing play. Up to 4 players can join in on the classic Simpsons side-scrolling arcade game as Homer, Marge, Bart, and Lisa. If you do not have a buddy around to play with, you can hop onto the live WiFi (no subscription required) to play with other remote Arcade1Up players. In addition to the core The Simpsons game, The Simpsons Bowling is also preloaded.

Starting today at Walmart, the Arcade1Up Mortal Kombat has also dropped in price. Arcade1Up is known for releasing high-quality recreations of your favorite arcade games, and the Mortal Kombat cabinet (or is it Kabinet?) Is no exception. In addition to the classic fighting game, the cabinet comes with 11 other games on board. This model does not include a riser.

Starting today, you can pick up a copy of Mass Effect Legendary Edition and 7 other PC games for only $ 11.99. Mass Effect Legendary Edition currently sells for $ 60 on Steam, so getting that game alone for $ 12 would already be a fantastic deal. Humble Choice gives you additional perks like access to their Humble Games Collection and up to 20% off Humble Store purchases for the rest of the month. You can cancel your subscription anytime.

Projectors are out. You can score one of Sony’s higher-end full-array LED TVs of 2021 – at a massive size no less – for under $ 2000. A true (not simulated) 4K projector costs upwards for $ 4K + and even at the price it could not touch the image quality like you would on this TV. Compared to a “regular” 65 “TV set, the size difference is huge. An 85” TV boasts a whopping 70% larger viewing area than a 65 “TV. You definitely will not get a bigger screen AND amazing image quality for the same price anywhere else right now.It also boasts HDMI 2.1 for 4K @ 120Hz and VRR and it looks good in HDR thanks to its wide color gamut and full array LED backlighting with local dimming.

Walmart is offering this AMD Ryzen 5 3600X GTX 1660 Ti equipped gaming PC for only $ 799. The GTX 1660 Ti is still a very capable video card that can handle just about any game at 1080p resolution. You certainly will not find a more powerful video card for this price.

Currently this is one of the least expensive RTX 3060 gaming rigs we can find. It’s sold and shipped by Amazon direct (not a 3rd party vendor). Although the ship date is a little while off in early April, there are reports of some people getting it much earlier. The low price tag might imply that the RTX 3060 is not up to snuff, but nothing could be further from the truth. The RTX 3060 is about 20% faster than the RTX 2060 SUPER and is on par with the RTX 2070. That means it handles 1080p gaming beautifully and has the chops to take on 1440p and VR.

If you prefer to build your own gaming PC instead and you absolutely can not wait any longer for an RTX series video card, check out these combo bundles at Newegg. Pick up an RTX 3060, RTX 3070, or RTX 3080 video card bundled with a motherboard, SSD, RAM, computer case, or PSU. You’ll get a lot more value than spending the same amount (or more) on just the video card alone from a scalper on eBay.