“And then we say, China did it, we did not do it, China did it, and then they start fighting with each other and we sit back and watch,” he said of labeling US military planes with Chinese flags and bombing Russia , which was met with laughter from the crowd of donors, according to a recording of the speech obtained by The Washington Post.

His 84-minute address to about 250 of the Republican Party’s top donors at the elite Four Seasons focused heavily on foreign policy and his claims that the 2020 election was “rigged,” as he ticked through a smorgasbord of topics and perceived enemies, using vulgarities and jokes that often drew raucous laughter. Trump also took pictures with some of the party’s top donors and participated in a pricey roundtable for about 10 of them.

After coming under fierce criticism for praising Putin as “savvy” and “brilliant” for the Russian leader’s moves in Ukraine last month, he struck a tougher tone on Saturday – claiming Putin never would have invaded the country if Trump was president of the United States .

But he spent far more time blaming President Biden than Putin, and often spoke in vague platitudes without specifying what he would have done differently.

“I know Putin very well. He would not have done it. He would have never done it, ”Trump said, without mentioning that, as president, he held up military aid for Ukraine as he pushed the country to investigate Biden’s son Hunter.

He espoused praise for North Korea’s brutal leader, marveling at how Kim’s generals and aides “cowered” when the dictator spoke to them. “Total control,” Trump said of how Kim ran the country, describing generals snapping to attention and standing up on command.

“His people were sitting at attention,” he added.

“I looked at my people and said I want my people to act like that,” he said to laughter.

Trump also spent a large portion of his speech falsely claiming that he won Georgia, Wisconsin and other states in the 2020 election, offering unsubstantiated theories about how he won. After not touching on the election until minute 45 – a win for some of his advisers – he finished the speech with a long jeremiad about it. For example, he said, he knew he had to have won Georgia because he won Alabama and South Carolina by such large numbers, and he accused Facebook CEO Mark Zuckerberg of tilting the election against him.

Trump made an ominous call for the party to be more loyal in backing up his claims about fraud.

“The vote counter is often more important than the candidate,” he told the crowd, saying he had learned that from radio show host Mark Levin. “… We have to get a lot tougher and smarter at the polls.”

If not, he said, the Republican Party would no longer exist.

“At a certain point, they will not show up if we allow this to happen again,” he said of Republicans.

Republican National Committee Chairwoman Ronna McDaniel, he added, had vowed she would “work on it.”

He also viciously mocked Republicans who did not back him in his crusade to hold power after he lost the 2020 election. “Stupid, corrupt Mitch McConnell,” he said of the Senate minority leader, before labeling former Vice President Mike Pence a “conveyor belt – like corn” for opening and counting the electoral college votes as the Constitution requires.

“Terrible,” he said of Republican Sen. Bill Cassidy (La.), Who voted to impeach him.

Trump all but said he planned to run for the presidency again – and that he was going nowhere. “I wonder who that might be,” he jokingly said of the 2024 nominee, as the crowd broke out in “Trump!” chants.

Trump’s speech was a culmination of two days of events at the gilded riverfront resort here, where a dazzling chandelier dominates the lobby and sturgeon caviar goes for $ 200 an ounce and tiki cocktails go for $ 18. Donors who have written checks for tens of thousands of dollars walked out Saturday night holding copies of the former president’s photo book, titled “Our Journey Together,” purchased by the RNC.

The mood has been largely ebullient at the hotel, as donors and operatives predicted Republicans would win back congressional majorities.

Donors have also heard from Pence, senators and congressmen, pollster Kellyanne Conway and UN Ambassador Nikki Haley, according to people familiar with the events. Pence and Haley, both potential 2024 candidates, touched on some of the same themes as Trump – Ukraine and Russia, chiefly – but offered vastly shorter and different speeches.

Discussing future elections, Pence said Republicans needed to move past the 2020 election loss. Trump has continued to falsely claim that Pence had the authority to overturn the 2020 election during Congress’s counting of electoral college votes, which he did not. Such false claims helped fuel the “Hang Mike Pence!” chant that erupted among the pro-Trump mob during the US Capitol riot on Jan. 6, 2021.

“My fellow Republicans, we can only win if we are united around an optimistic vision for the future based on our highest values,” he said. “We can not win by fighting yesterday’s battles or by re-litigating the past.”

Pence advisers said he wanted to draw a contrast with Trump, who continues to look back on the 2020 election, as he did on Saturday night.

Pence obliquely chastised Trump for his comments that Putin was “savvy” and “brilliant,” according to a copy of his remarks reviewed by The Post. “There is no room in this party for apologists for Putin,” Pence said. Trump cited the comments Saturday night: “Nobody has ever been tougher on Russia than me,” he retorted, adding that those who have accused him of being a “Putin apologist” disqualify themselves from being “serious leaders of our country.”

Haley did not mention Trump once in her speech, according to audio reviewed by The Post. She largely attacked Biden and described a country in decline that is battling over boys playing on girls’ sports teams, gender issues in the military and curriculum fights in classrooms.

“The reason Ukraine is in this situation, the reason we have world chaos like we are, is the United States has been completely and totally distracted,” Haley said. “We have to stop this national self-loathing that’s happening in our country.”

She implicitly criticized the Trump administration for not doing more to take on China when it came to the coronavirus pandemic and, in contrast to Trump’s comments in recent weeks, criticized Russia for its moves in Ukraine.

“When China gave covid to the world and millions of people died, what did we do? We did not even call one pitiful meeting at the United Nations, ”she said. “We did not ask China to step up. “We’ve done nothing about it.”

Several people in the room said that Trump’s speech stretched far too long and that he sounded like he was rambling more in the last 30 minutes. In the middle of the speech, attendees said people in the crowd seemed to lose interest.

Trump came to the dinner as the leading figure in the GOP, but his influence has waned in recent months, according to polls and interviews with activists and donors. Though he has raised more money than any other Republican since leaving office – his political action committee has more than $ 120 million – he has seen some erosion in support.

That Trump came to New Orleans at all – he rarely leaves his properties – and that the GOP did not hold the event in Palm Beach, Fla., At his club as they did last year were signs to some that his influence has faded. Last year, his speech was widely panned, and some donors left early, as he made it all about the election.

Trump spent much of the evening talking about the fighting in Ukraine and sought to project strength on his foreign policy record, regaling the crowd with a long story about how his administration took on the Islamic State militant group.

He bragged about pushing NATO – which he called a “paper tiger” – to force its countries to pay more for joint defense, but did not mention that he threatened to pull out altogether. He attacked Biden for rising inflation and gas prices, using exaggerated numbers in some cases, and said countries were “emptying their prisons” in the United States until he came along.

He mocked Biden for continually saying the United States would not militarily attack Russia but offered ambivalence on exactly what he could do. “We’re not spreading democracy at the point of a gun,” he said. Trump said Putin had talked more about nuclear power recently because he did not respect Biden, but he did not offer proof. And he said Biden should take a more belligerent tone.

He said the military, under his watch, had gotten into “skirmishes” with Russian troops and won, but he did not say more.

And he ominously spoke of Putin being more willing to engage in nuclear war – even referencing World War III – because Biden is president. He said that around the world, others would become more aggressive, too, without him.

“Watch China. You watch what’s going to happen there. Everything seems to be falling to pieces, ”he said. “His complete and gross incompetence, they threaten a much wider world.”

Biden has received some plaudits for his handling of the Ukraine situation among foreign policy experts.

Trump reiterated some of his frequently repeated falsehoods and petty grievances. “The global warming hoax, it just never ends,” he said. He mocked the concept of sea levels rising, disputing widely held science. “To which I say, great, we have more waterfront property,” he said.

“There was a big thing about global cooling – what will be next?” he said. Trump said he was more concerned about “nuclear warming” than global warming.

He bragged about his crowds, inflating numbers at recent rallies, and mocked Biden for observing social distancing during the 2020 campaign. “He’d have eight circles and he’d have to get the media to fill them,” he said, describing the distanced seats Biden’s team would put out at rallies, with circles around them.

Trump called George Conway, the husband of Kellyanne Conway and a fierce critic of the former president’s, a “stupid son of a b —-” and questioned why she married him, even as he extensively praised her. He mocked several of his former aides, including John Bolton, who he said only loved going to war. And he labeled Rep. Adam B. Schiff (D-Calif.), Who led the congressional impeachment probes against him, a “watermelon head… because his head is shaped like a watermelon.” 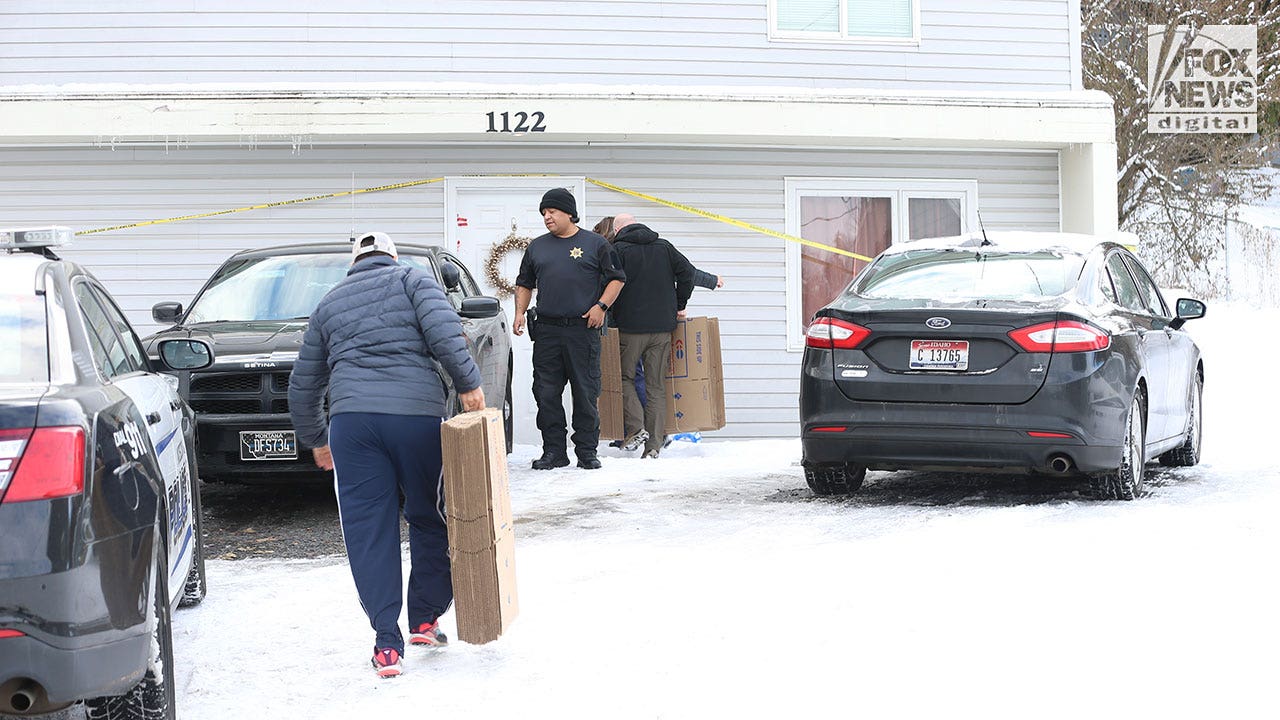 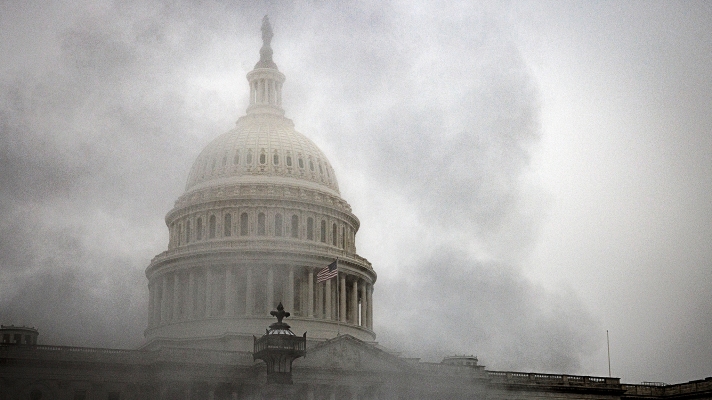 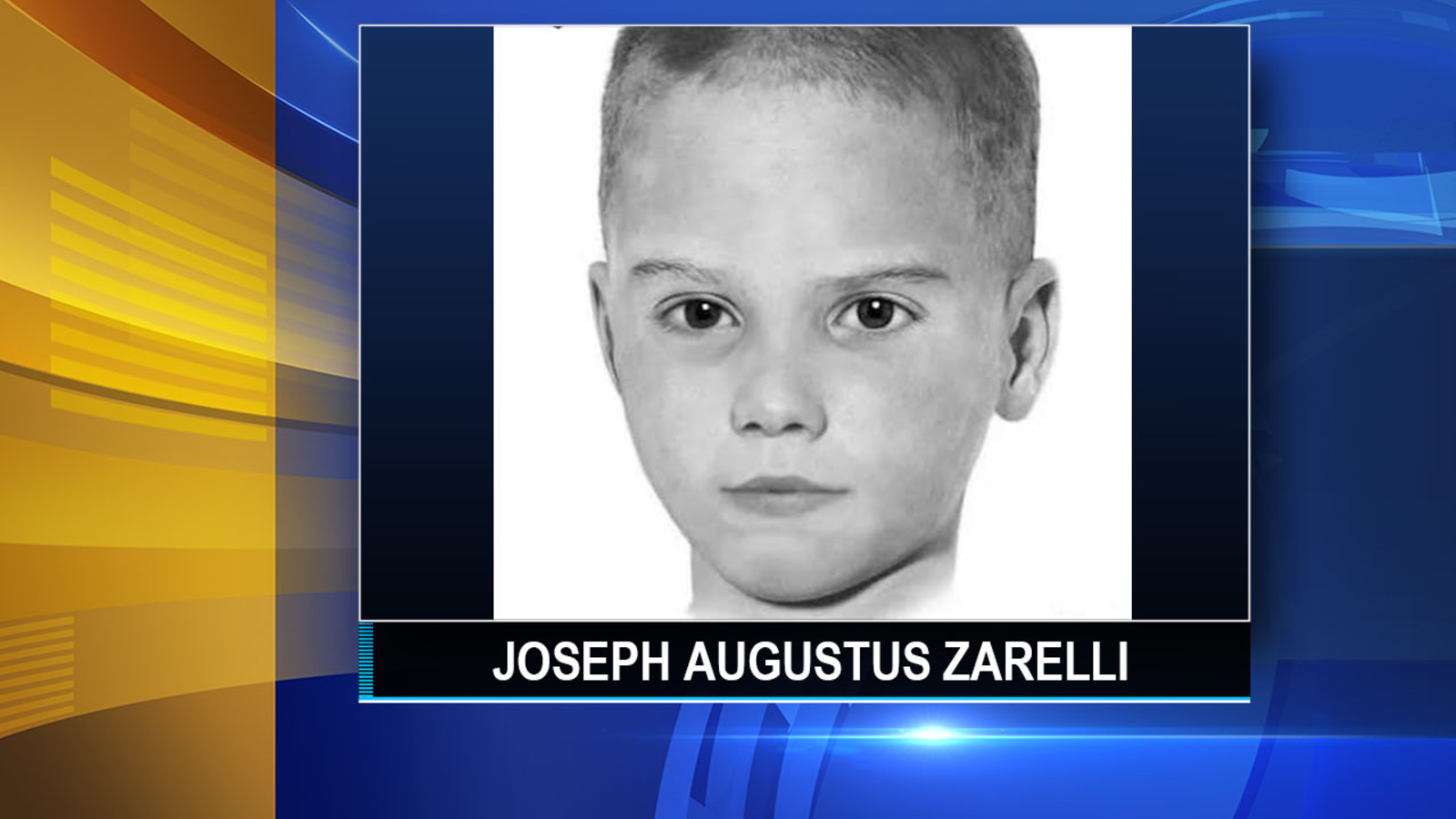