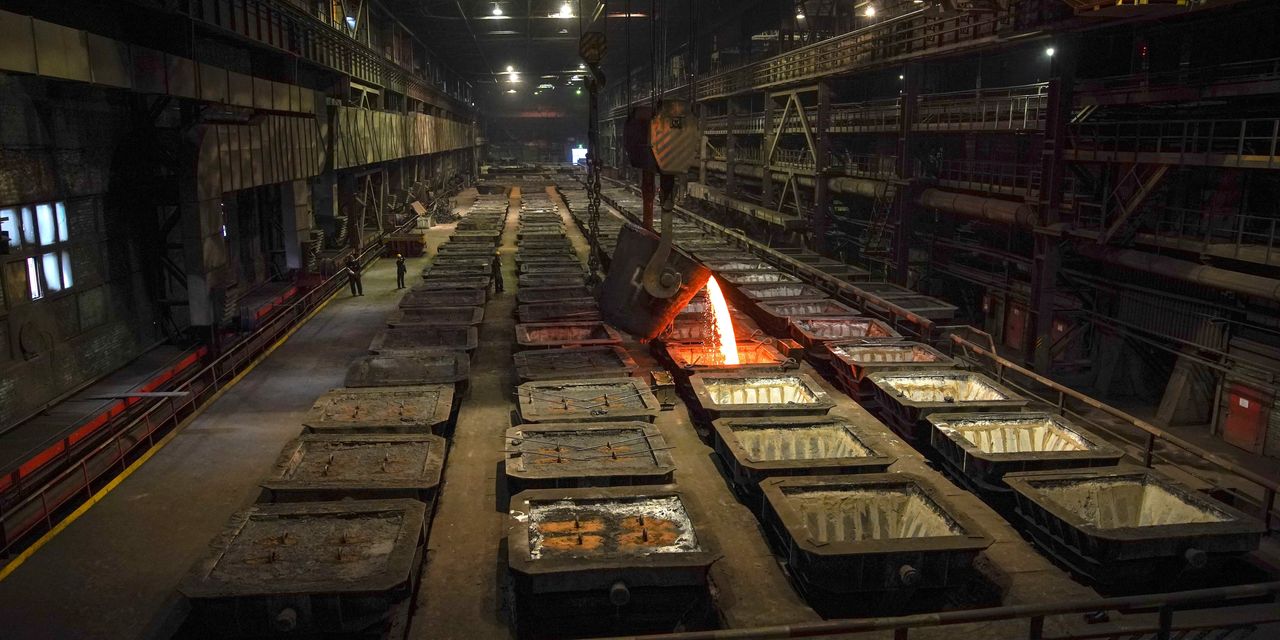 From its base at a former Arctic gulag, Russia’s MMC Norilsk Nickel PJSC digs up a large portion of two metals that are essential to greener transport and computer chips.

So far the US and its allies have not sanctioned the company, or its oligarch chief executive, underscoring the dilemma some analysts say governments face in seeking to punish Russia without hurting their own access to key commodities.

The mining company is responsible for about 5% of the world’s annual production of nickel, a key component of electric-vehicle batteries, and some 40% of its palladium, which goes into catalytic converters and semiconductors. Nornickel, as the company is known, also supplies energy transition metals such as cobalt and copper.

The price of those metals has jumped since Russia invaded Ukraine amid concerns that Western sanctions or logistical difficulties stemming from the conflict could choke supplies. On Friday, nickel traded at its highest level for a decade, and is up 37% so far this year. Palladium is up around 57% year to date.

Despite the rally in metals prices, Nornickel’s share price — like that of other Russian commodity companies — has dropped, and is down 17% so far this year. On Saturday, Fitch Ratings downgraded Nornickel’s debt to junk, reflecting the tougher environment in Russia and weakened financial flexibility of its commodity companies.

Several Western companies say they are looking to diversify their supply away from Nornickel. That mirrors a trend across several commodities, including oil and steel, as Western buyers steer clear of Russian suppliers amid concerns they could be hit by sanctions or simply have problems getting products out of the country.

A spokesman for Nornickel said the miner is committed to fulfilling its obligations to customers, partners and employees. CEO Vladimir Potanin, who also holds a 31% stake in the company, declined to be interviewed.

Western sanctions in response to the current conflict have so far largely avoided companies that provide the West with oil, gas and other key commodities.

Few companies are as pivotal in large commodity markets as Nornickel, particularly for palladium.

“If we have sanctions and we can not access that palladium, you have to expect disruption globally,” said Gabriele Randlshofer, managing director of the International Platinum Group Metals Association, a trade group whose members include buyers and suppliers of palladium.

“At the moment all companies are looking at [who supplies them]they have to, ”she said.

Among the companies looking for alternative supplies of nickel is Outokumpu Oyj, one of the world’s largest stainless steel manufacturers. The Finnish company said around 6% to 7% of its nickel comes from Nornickel, with the rest coming from recycled steel. “Given the situation in Ukraine, we are looking for alternatives for Russian supply for nickel,” a spokeswoman said.

Germany’s BASF SE, meanwhile, said it would fulfill existing contracts with Nornickel but not pursue any new business with the Russian company. The chemicals giant described Nornickel as an important supplier of nickel and cobalt for its production of cathode materials as well as a source of palladium and platinum.

On Friday, British steel executive Peter Davies received an email from a Polish steel mill he is invested in, saying that they were unable to buy nickel amid problems related to the conflict in Ukraine.

“Expect an earthquake in [the] steel industry, ”the mill said, according to a copy of that email.

Reverberations are being felt across industries that have typically relied on Russian commodities.

Refiners have balked at buying Russian oil, according to traders and oil executives. Swedish refiner Preem AB and Finland’s Neste Oyj, for instance, say they have halted purchases of Russian oil and plan to replace it with crude from Northern Europe.

Severstal PAO, one of Russia’s largest steel companies, struggled to sell its steel as soon as Moscow’s forces crossed into Ukraine, according to a person familiar with the matter, who said would-be buyers were concerned about possible sanctions. In Severstal’s case they did come, with the European Union sanctioning its majority owner Alexey Mordashov on Monday.

“It’s helping to make the markets twitchy, everyone is looking at it and saying if we are taking out (Nornickel’s) nickel from the market that is significant,” said Andrew Mitchell, director of nickel research at energy consulting firm Wood Mackenzie.

Nornickel’s production is important, analysts say, because demand for nickel is forecast to grow strongly amid the growing popularity of electric vehicles. Nickel had the biggest supply deficit of any base metal last year relative to market size, at about 6%, according to analysts at BMO.

Nornickel is run by CEO Mr. Potanin, a former Russian deputy prime minister under Boris Yeltsin who helped forge the privatization deals that followed the breakup of the Soviet Union and put much of the country’s vast commodity wealth into the hands of a group of businessmen now dubbed oligarchs. More recently, Mr. Potanin was key to bringing the 2014 Winter Olympics to Russia, an idea which followed a ski trip to Austria with Russian President Vladimir Putin, The Wall Street Journal has previously reported.

Nornickel counts two other well-known oligarchs as investors. The company said that Roman Abramovich owns around 2% of its shares. United Co. Rusal International, which is part-owned by Oleg Deripaska, holds a 26.25% stake.

The company mines in one of the world’s most northern cities, Norilsk — a former penal colony.

Norilsk has also gained a reputation as being one of the planet’s dirtiest cities because of pollution related to mining and refineries. In 2020, almost 45 tons of jet fuel leaked into the ground from a pipeline owned by Nornickel. That followed a spill of 20,000 tons of diesel from a holding tank at one of its other installations the same year.

The area also provides the company with some of the world’s best mineral deposits, which are mined up to 5,000 feet below the permafrost.

“It is still probably the greatest ore body in the world,” said Mr. Mitchell.

Write to Alistair MacDonald at alistair.macdonald@wsj.com