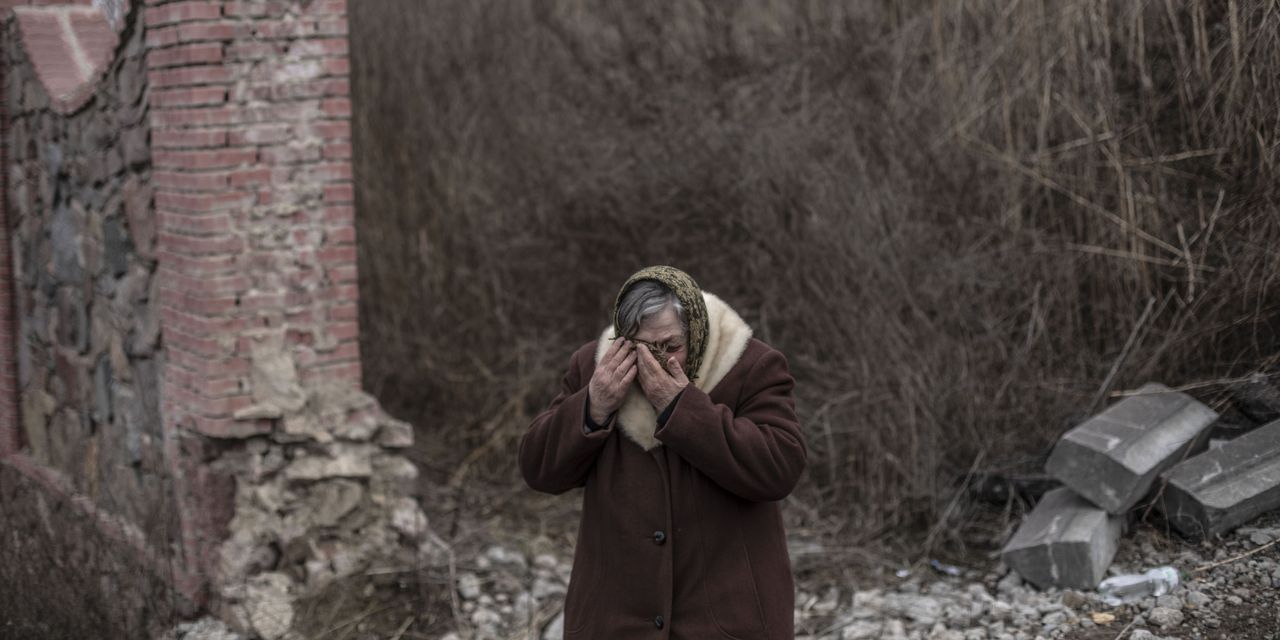 IRPIN, Ukraine — A line of yellow school buses pulled up on a forested roadside in this once-prosperous suburb of Kyiv on Sunday, ready to evacuate Ukrainian civilians. Then the Russian shells started falling.

People dove for cover, hugging the ground. Frightened pets ran into the woods. A father, mother and a child were killed. The family’s bodies fell near one another by a monument to local soldiers who died fighting Germany in World War II. Their gray suitcase stood nearby, untouched by the blast.

In total, eight Irpin civilians were killed by the afternoon, as relentless shelling continued, said Mayor Oleksandr Markushyn. A nearby house was on fire after receiving a direct hit. In the distance, plumes of gray smoke rose above Irpin, where Ukrainian forces fought to repel a Russian attack on what is a critical gateway to Kyiv.

Russia’s military insists it is not targeting civilians and blames Ukrainian “nationalists” for shelling their own, without any evidence. But deaths are mounting from Russian strikes on residential areas in cities throughout the country, while agreements to evacuate other towns and cities have fallen through.

On Sunday, Ukrainian authorities said they had to abandon efforts to evacuate civilians from the southern city of Mariupol, for the second day in a row, saying Russia shelled the southeastern port city as evacuation convoys were gathering.

More than 200,000 civilians had been expected to start leaving Mariupol and nearby Volnovakha on Saturday in a deal overseen by the International Committee of the Red Cross. The agreement was supposed to be a test case for similar humanitarian corridors out of other Ukrainian cities and towns, including Irpin.

Those trapped in the besieged cities include at least 2,000 foreign citizens, said Ukraine’s Deputy Prime Minister Iryna Vereshchuk. “They are suffering from cold, hunger and shelling alongside Ukrainian students, Ukrainian women, children and the elderly,” she said. “The whole world must realize what is going on.”

In Irpin, residents have been streaming out for days, as Russian shelling has increasingly hit civilian neighborhoods, with artillery rounds smashing into high-rise apartment towers. Sunday was the first time Russia directly attacked an evacuation route — as hundreds of civilians were trying to escape.

“It’s a miracle I’m still alive,” said Lyubov Tarasyk, her face flushed and her coat muddy. “It hit so close to us. I am fortunate someone pushed me down, my face into the dirt. The soldiers who helped me, they said I was born in a shirt, ”she added, using a Ukrainian expression for incredible luck.

Russian and Ukrainian negotiators, who are scheduled to hold their third round of talks on Monday, have agreed in principle to open humanitarian corridors for civilians fleeing areas besieged by Russia or under Russian attack.

Irpin is not covered by any humanitarian corridor agreement, but Ukrainian officials said they were trying to secure evacuations from the nearby towns of Bucha and Hostomel.

Ukrainian forces battling to retain control of Irpin destroyed a column of Russian armor on Saturday night. On Sunday, they fired long-range artillery barrages on Russian positions. The town remained contested, with a large number of Ukrainian troops, including special forces armed with antitank missiles, trying to repel a Russian advance. “We are holding off the enemy, but unfortunately the enemy has come with an enormous force,” said Kyiv region Gov. Oleksiy Kuleba.

Caught in the middle of this are thousands of civilians, many of them too frail to walk out even without the shelling. At the entrance to Kyiv from Irpin, a woman who only gave her name as Lesya was shaking as she spoke to a psychologist from Ukraine’s emergency service. Her parents, in their 80s, have remained behind.

On Sunday, just before the shelling of the evacuation route started, Ukrainian soldiers were helping women and children climb over the highway railing and into buses, passing prams and suitcases. Some of the elderly had to be carried over, clutching canes.

The buses, organized by charities nearby, were offering free rides to the western Ukrainian cities of Rivne and Lutsk. Once every few minutes, civilian cars brought in people injured in the shelling. They were loaded into waiting ambulances and taken to hospitals.

Maria Polianska, who was a real-estate agent in Irpin before the war, had just made it out, and was waiting to see if her grandmother also managed to escape. “We ran as fast as we could as the shells were falling all around us,” she said, breathing heavily.

She said she stumbled and fell down on the road. There was no electricity in the town because the power substation was damaged, and Russian forces occupied that area, making repairs impossible, residents said.

A retired accountant who only gave his name as Ihor said that eight houses next to his caught fire in Irpin overnight. “It was so scary, but especially for him, he was shaking,” he said, pointing to Tip, the chihuahua he was carrying under his arm.

Ukrainian soldiers on Kyiv’s outskirts said they expected a massive offensive in the next 24 hours, as Moscow sought to improve its negotiating position ahead of Monday’s talks. “They are going to come here with all they’ve got,” said a Ukrainian airborne forces sergeant who wanted to be identified by his call sign, Casper.

A career soldier, he leads a front-line detachment made up mostly of volunteers from Ukraine’s Territorial Defense force. He said he was confident his position will hold. “Putin has made a mistake,” he said. “He thought he would be fighting just with the Ukrainian army, but now he is fighting with the entire Ukrainian people.”