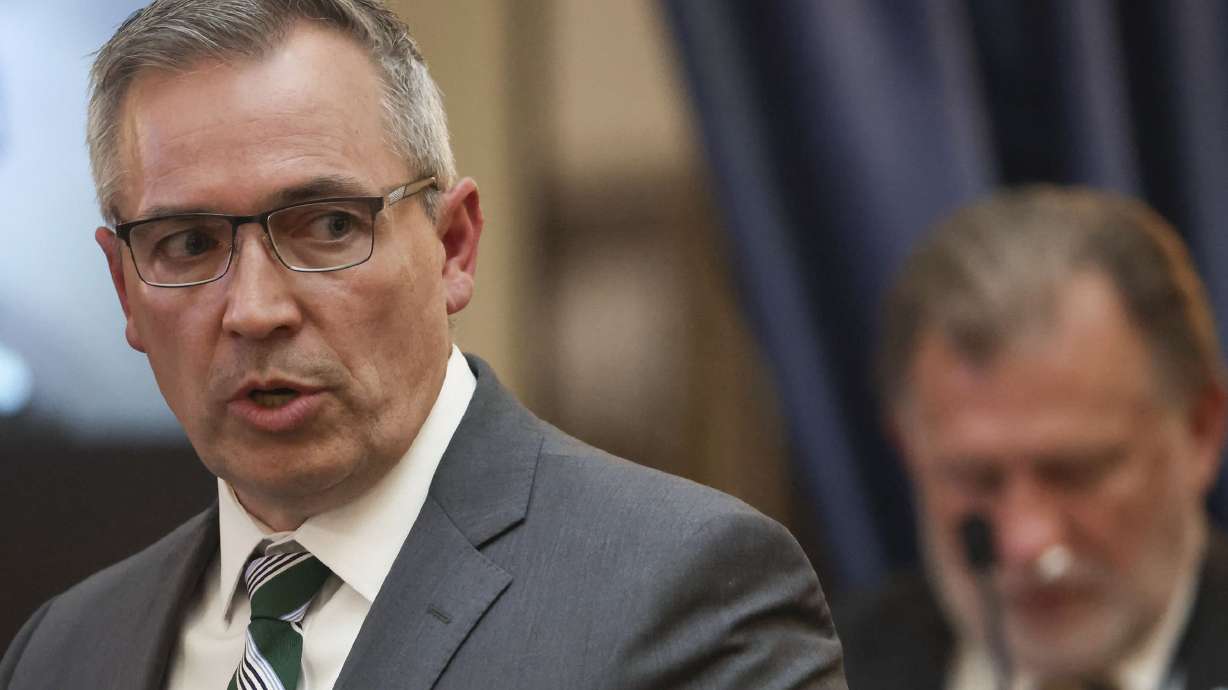 SALT LAKE CITY – In the last few hours of the Utah Legislature on Friday night, a lawmaker proposed an all-out ban on transgender female students participating on girls sports teams.

The new version of the bill was a leap away from the original that sought to create a commission to determine eligibility of individual students.

But Gov. Spencer Cox said he’ll veto it immediately. The narrow vote margin in the Senate is unlikely to see a veto override.

“I was as stunned as most members of the Senate were,” Cox said. “Some of the worst decisions get made at the last minute.”

On the Senate floor about 8:30 pm, Sen. Dan McCay, R-Riverton, introduced his proposed ban and explained he believes finding a compromise on the issue “did not work out” and left some wondering “what we should do in the alternative.”

The new version of HB11 would put the ban in place and create a “springing trigger” that will come into play if a court stays the ban. If the state receives an injunction, the bill would initiate a “brilliant compromise” to create a commission to determine eligibility, McCay said.

He said he considered whether Utah should address the issue like 10 other states by putting “a ban in place,” calling the move a “pin in the debate … before we see an uptake of transgender females participating in sports.”

Society decided “long ago” to create a “lane” for women to compete in, the senator said.

“This debate, if nothing else, is at least bringing that issue to the forefront. As the father of four daughters, we’ve had this debate on several occasions. They all participate in sports in one way or another,” McCay said, adding that it’s been difficult for his family to find a balance on the issue.

McCay appeared to start crying as he said he feels it’s his “responsibility” to propose the changes.

“I’ve got to protect them,” McCay said of his daughters.

Bill co-sponsor Sen. Curt Bramble, R-Provo, noted the previous version of the bill the House worked on would set up a commission intended to evaluate the physiological characteristics of a transgender female athlete to determine whether they exceeded the average performance of a female of a certain age.

But the bill as written contained a list of physical characteristics that would need to be evaluated, Bramble noted. Another version of the bill negotiated with LGBTQ advocates and other stakeholders would remove the list of characteristics and leave those decisions in the hands of the commission.

However, before the floor debate, Bramble said he would give up his time to present the bill to allow McCay to propose his version.

The debate is a continuation from last year, when bill sponsor Rep. Kera Birkeland, R-Morgan, proposed a ban on female transgender athletes. This year, she brought the idea of ​​a commission after last year’s bill failed in the Senate.

Late. Gene Davis, D-Salt Lake City, called the proposal a “blindside to our side of the aisle.” He asked if the bill could be circled for the caucus to meet privately to discuss the bill.

Bramble opposed that request and said the state “needs to address” it now.

But Democratic lawmakers continued to plead for time to discuss the bill, contending they needed a chance to discuss it due to the extent of changes. Their request was not granted as the majority of Republican senators voted against letting them huddle.

Late. Derek Kitchen, D-Salt Lake City, noted that the new proposal is a different bill than what was approved by the House and approved by a Senate committee. He questioned the process the bill went through.

In an emotional speech on the floor, Sen. Daniel Thatcher, R-West Valley City, said he was “really disappointed” his colleagues would not give the minority caucus a chance to talk about the change.

He said he’s also disappointed about the message the new version of the bill will send to transgender kids.

Thatcher urged any children who are struggling to download the SafeUT app – a statewide resource for mental health help – immediately if they need to.

“Because we need you, and it will get better. … And I’m sorry for what’s about to happen,” Thatcher said.

Late. David Hinkins, R-Orangeville, compared the issue to the horse industry and said male horses do not race against female horses.

“A jockey’s fine, I’d rather have a female jockey than a male jockey. But as far as running, I’d probably bet on the male,” Hinkins said.

Late. Kathleen Riebe, R-Cottonwood Heights, said school districts across the state learned at 8:21 pm, three hours before the end of the session, that they could face lawsuits should the bill pass.

But McCay said school districts would qualify for governmental immunity and not face liability. He acknowledged, however, that the ban would be expensive for the state to defend in court. The Utah High School Activities Association, a private entity, would not be indemnified in the bill and would need to retain its own representation in lawsuits.

Senate Minority Whip Luz Escamilla, D-Salt Lake City, questioned what will happen to girls who aren’t transgender but who are “outliers” in size and strength for their age if they get challenged about their gender. “What protection are we giving to those children and their families?” she asked.

Bramble said he does not believe the bill would give parents the chance to challenge other children.

In a news conference immediately after the Senate vote, Cox told reporters he was “as stunned as most members of the Senate were” by the new version of the bill. He said an all-out ban was never a part of the conversations about the commission, and it was “incredibly disappointing” to see the bill changed so drastically in the final hours.

But Cox promised to immediately veto it as soon as it lands on his desk.

Asked about what he would say to transgender youth listening to the debate and any of the transphobic remarks on the Senate floor, Cox urged them to “just listen to (Thatcher’s) testimony and know that’s where I come from, as well.”

The governor, who has been an outspoken ally for the LGBTQ community, then teared up and added: “It’s going to be OK. We’re going to work through this. We’re going to find a good path, and there are a lot of people that really love and care about them. “

For those across the nation paying attention to how Utah lawmakers acted on the issue, Cox said it’s an issue that other states across the nation have grappled with, and Utah is “trying to figure this out, too.”

“Have some patience with us,” he said.

He said those working on the bill promised they would make those changes.

Last year, the governor said he would veto the bill that sought to ban transgender females should it pass.

The new version of the bill drew the ire of LGBTQ advocates.

“A last-minute substitute has changed HB11 into an outright ban against transgender youth playing sports. It is an entirely new bill that scraps the months of negotiation among many interested parties. This is not the #UT way to create legislation. #Utleg # utpol, “ACLU of Utah tweeted.