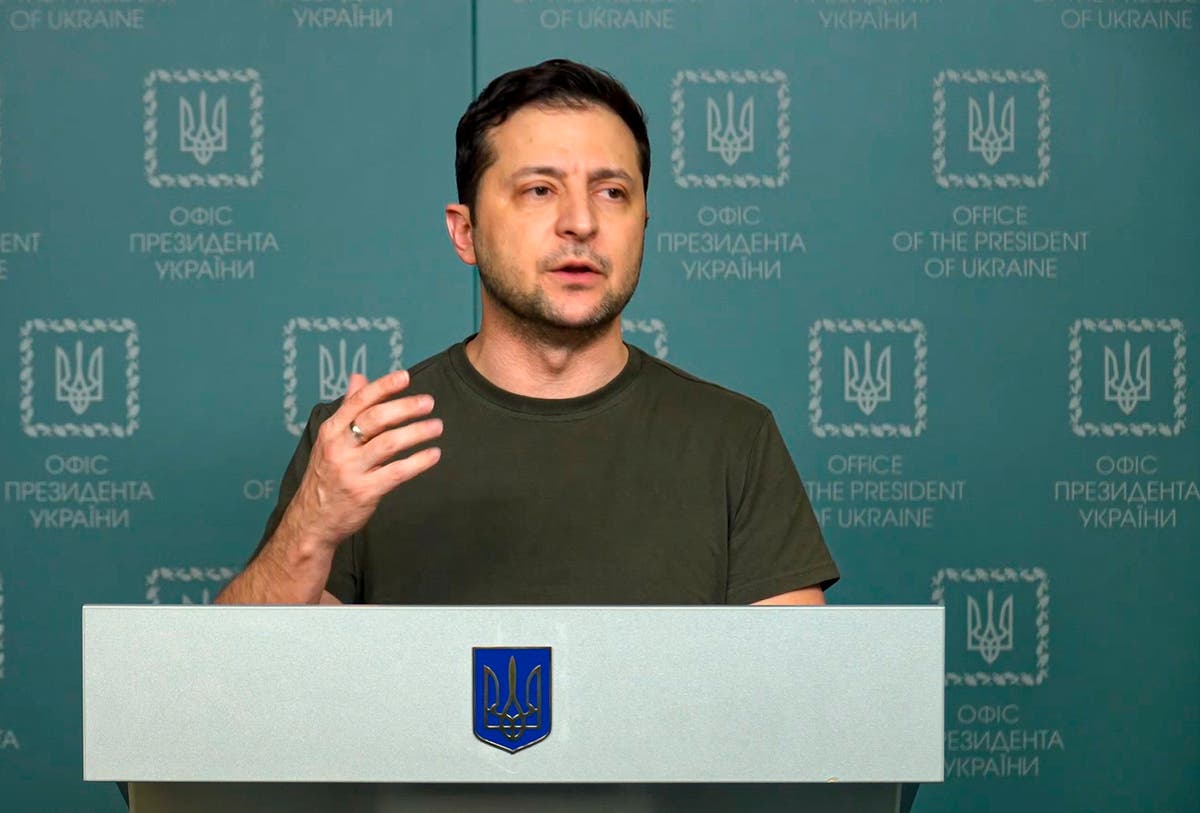 Two US senators have come under fire for sharing photos of Volodomyr Zelensky on social media after they were reportedly asked not to for the safety of the Ukrainian president.

Democratic Rep Dean Phillips slammed Republican Senators Steve Daines and Marco Rubio for their “appalling and reckless ignorance” after they each posted screen grabs from a Zoom call between Mr Zelensky and a group of US lawmakers on Saturday morning, where he had pleaded for more help for Ukraine from the US.

The congressman tweeted on Saturday that all lawmakers had specifically been asked not to post anything from the virtual meeting online in order to “protect the security” of the Ukrainian president who is said to have been targeted by multiple Russian assassination plots over the last week.

“The Ukrainian Ambassador very intentionally asked each of us on the zoom to NOT share anything on social media during the meeting to protect the security of President Zelenskyy,” he tweeted.

“Appalling and reckless ignorance by two US Senators.”

The Democrat shared a link to a social media post that revealed the tweets from the two senators.

Mr Rubio, who represents Florida in the US Senate, had posted a screen grab on Twitter of Mr Zelensky to his 4.2m followers, writing: “On zoom call now with President Zelensky of #Ukraine”.

Montana Senator Daines also posted a photo from the meeting on his Twitter, with the caption: “Currently on a zoom call with President Zelenskyy. #StandWithUkraine. ”

Hours later, they were joined by fellow Republican Texas Senator Ted Cruz as well as Democrats Sheldon Whitehouse, senator for Rhode Island, and Jim Himes, a Connecticut congressman, in carrying out the purported security breach.

“The US needs to immediately step up to make sure they have the jets and weapons they need, & to impose an oil & gas embargo to disrupt Putin’s war.”

Mr Whitehouse tweeted a photo of an iPhone screen showing Mr Zelensky on Zoom, writing: “Stunning to be on with Zelenskyy in the midst of all this. God bless him and his people. ”

Meanwhile, Mr Himes also shared a photo while writing: “A number of us met this morning remotely with President Zelenskyy @ZelenskyyUa He is standing strong, but pleaded for more help.

“Planes, oil embargo, continued military aid. Profile in courage. We stand with him. ”

The purported security breaches came following a report that Mr Zelensky has survived three assassination attempts in the last week from Kremlin-backed groups.

The Ukrainian president previously said that he is the “number one target” for Mr Putin but has refused an offer from the US to get him out of the country, vowing to stay and fight.

Mr Zelensky had invited all Republican and Democratic senators and House members to join him for a Zoom call on Saturday morning, where he pleaded for the US to provide greater assistance to Ukraine.

He called on the US to set up a no-fly zone over Ukraine, to implement sanctions on Russia’s energy sector and to send more military assistance for Ukrainian forces.

The call lasted for around an hour from 9.30am ET.

A source told CNN that the president thanked the US for the support it has given to Ukraine since Russia launched a full-scale invasion last Thursday.

Senate Majority Leader Chuck Schumer said in a statement obtained by Bloomberg that the Ukrainian president specifically asked for the West to send more planes to help with the Ukrainian defense.

“President Zelenskyy made a desperate plea for Eastern European countries to provide Russian-made planes to Ukraine. These planes are very much needed, ”he said.

“And I will do all I can to help the administration to facilitate their transfer.”

Missouri Senator Josh Hawley tweeted that Mr Zelensky also called on the US to ban imports of Russian oil and gas as he described the president’s courage as “inspiring”.

“Just finished a briefing with President Zelensky of #Ukraine, whose courage on behalf of his people is inspiring. Zelensky urgently asked the US to stop imports of Russian gas and oil, ”the Republican tweeted.

“More important than almost any other sanction, he said. When will Joe Biden listen? ”

Another senator told CNN that they also discussed other sanctions such as banning all commercial transactions like Visa and Mastercard in Russia.

At the end of the call, several lawmakers are said to have voiced their support for Ukraine by saying “Slava Ukraini” – the national salute that translates as “Glory to Ukraine”.

The Ukrainian president was visibly moved by their gesture, according to someone on the call.

The virtual meeting came after Mr Zelensky hit out at NATO for refusing to implement a no-fly zone over Ukraine in a video statement on Friday, saying that the decision has effectively given the “green light” for Russia to continue bombing cities across the country .

“Knowing that new strikes and casualties are inevitable, NATO deliberately decided not to close the sky over Ukraine,” he said.

“Today the leadership of the alliance gave the green light for further bombing of Ukrainian cities and villages, refusing to make a no-fly zone.”

The Biden administration and Nato allies have repeatedly insisted that they will not establish a no-fly zone over Ukraine.

A no-fly zone would ban Russia from operating across the country but would require the US military to essentially start shooting down Russian planes.

US Secretary of State Antony Blinken said on Friday that it would result in a “full-fledged war in Europe” and that “President Biden has been clear that we are not going to get into a war with Russia”.

NATO Secretary-General Jens Stoltenberg also ruled out introducing a no-fly zone, saying “we are not part of this conflict”.

“We have a responsibility as NATO allies to prevent this war from escalating beyond Ukraine because that would be even more dangerous, more devastating and would cause even more human suffering,” he said.

Mr Putin issued a warning to the West on Saturday that any attempt to impose a no-fly zone would be taken as a declaration of war against Russia.

The Russian president said that Moscow would view “any move in this direction” as an intervention that “will pose a threat to our service members”.

“That very second, we will view them as participants of the military conflict, and it would not matter what members they are,” he said.

Despite the risks of implementing a no-fly zone, 74 percent of Americans said they support a no-fly zone over Ukraine, according to a Reuters / Ipsos poll.

Pressure is also mounting on the US to ban imports of Russian oil and gas – a move that would hammer the Russian energy industry but could also lead to a spike in prices for Americans at the gas pump.