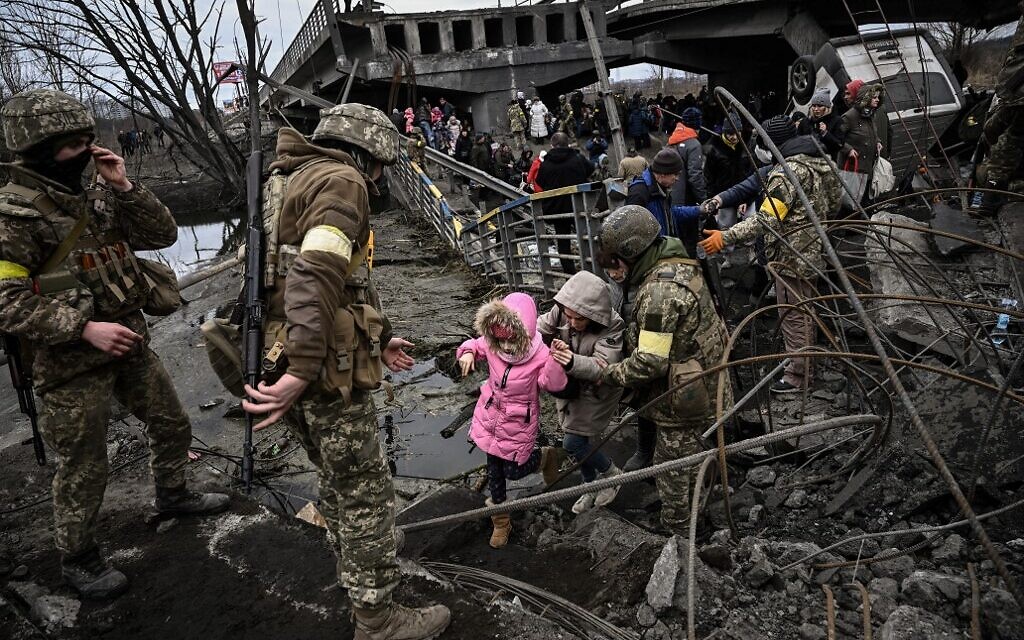 MOSCOW – Russian President Vladimir Putin said Saturday that any country that sought to impose a no-fly zone over Ukraine would be considered by Moscow to have entered the conflict.

“Any movement in this direction will be considered by us as participation in an armed conflict by that country,” the Russian leader said during a meeting with Aeroflot employees.

His comments came after NATO on Friday rejected Ukraine’s request to impose a no-fly zone that could force Russia to stop its jet fighters, bombers, and helicopters from attacking Ukraine.

Putin added that imposing a no-fly zone would have “colossal and catastrophic consequences not only for Europe but also the whole world.”

Putin also dismissed rumors that Russia is planning to declare martial law with his country’s military incursion into Ukraine in its second week.

“Martial law should only be introduced in cases where there is external aggression… we are not experiencing that at the moment and I hope we will not,” Putin said. 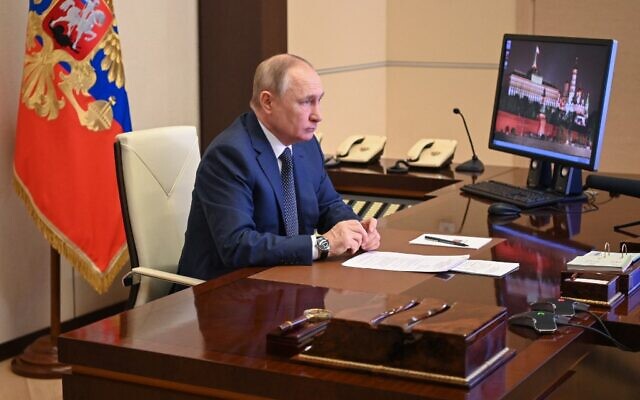 Russian President Vladimir Putin attends a flag-raising ceremony on the ferry Marshal Rokossovsky via a video link at the Novo-Ogaryovo state residence outside Moscow, on March 4, 2022. (Andrey Gorshkov / Sputnik / AFP)

NATO chief Jens Stoltenberg had said the alliance would not intervene in the conflict over fears of a direct clash with Moscow that could spiral into a wider conflict.

“The only way to implement a no-fly zone is to send NATO fighter planes into Ukraine’s airspace, and then impose that no-fly zone by shooting down Russian planes,” Stoltenberg said during a meeting on Friday.

“If we did that, we’ll end up with something that could end up in a full-fledged war in Europe, involving many more countries and causing much more human suffering.”

Ukrainian President Volodymyr Zelensky lashed out at NATO for ruling out the measure, saying Friday that the Western military alliance knew further Russian aggression was likely. 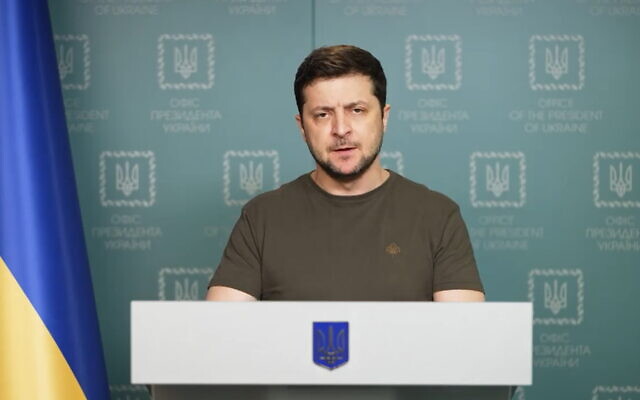 “Knowing that new strikes and casualties are inevitable, NATO deliberately decided not to close the sky over Ukraine,” Zelensky said in a video published by the presidency.

“We believe that the NATO countries themselves have created a narrative that the closing of the skies over Ukraine would provoke direct Russian aggression against NATO.”

Zelensky insisted that the NATO gathering was a “weak summit, a confused summit.”

“Today the leadership of the alliance gave the green light for further bombing of Ukrainian cities and villages, refusing to make a no-fly zone.”

US Secretary of State Antony Blinken said Friday that the suffering of Ukrainians will likely worsen, but defended the West’s focus on sanctions and limited military support as an effective way to stop Russia’s invasion. 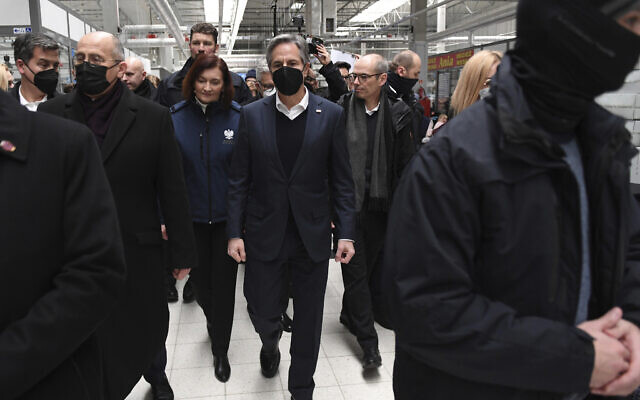 US Secretary of State Antony Blinken, center, tours a reception center for displaced persons from Ukraine, at the Ukrainian-Polish border crossing in Korczowa, Poland, on March 5, 2022. (Olivier Douliery / Pool Photo via AP)

Amid rising pressure for US and European allies, and especially NATO, to help Kyiv more on the battlefield, Blinken said that their actions so far against Moscow were only just beginning to have a punishing impact.

But he also said that more military support and more sanctions, as well as increased humanitarian aid for Ukrainians, were the focus of a day of talks at NATO and European Union headquarters in Brussels.

“The terrible expectation is that the suffering we’ve already seen is likely to get worse before it gets better,” Blinken told reporters.

Blinken, who has taken a lead role in organizing global retaliation against Russia, said a no-fly zone would be impossible to enforce without expanding the conflict.

“The only way to actually implement something like a no-fly zone is to send NATO planes into Ukrainian airspace and to shoot down Russian planes. That could lead to a full-fledged war, ”he said. 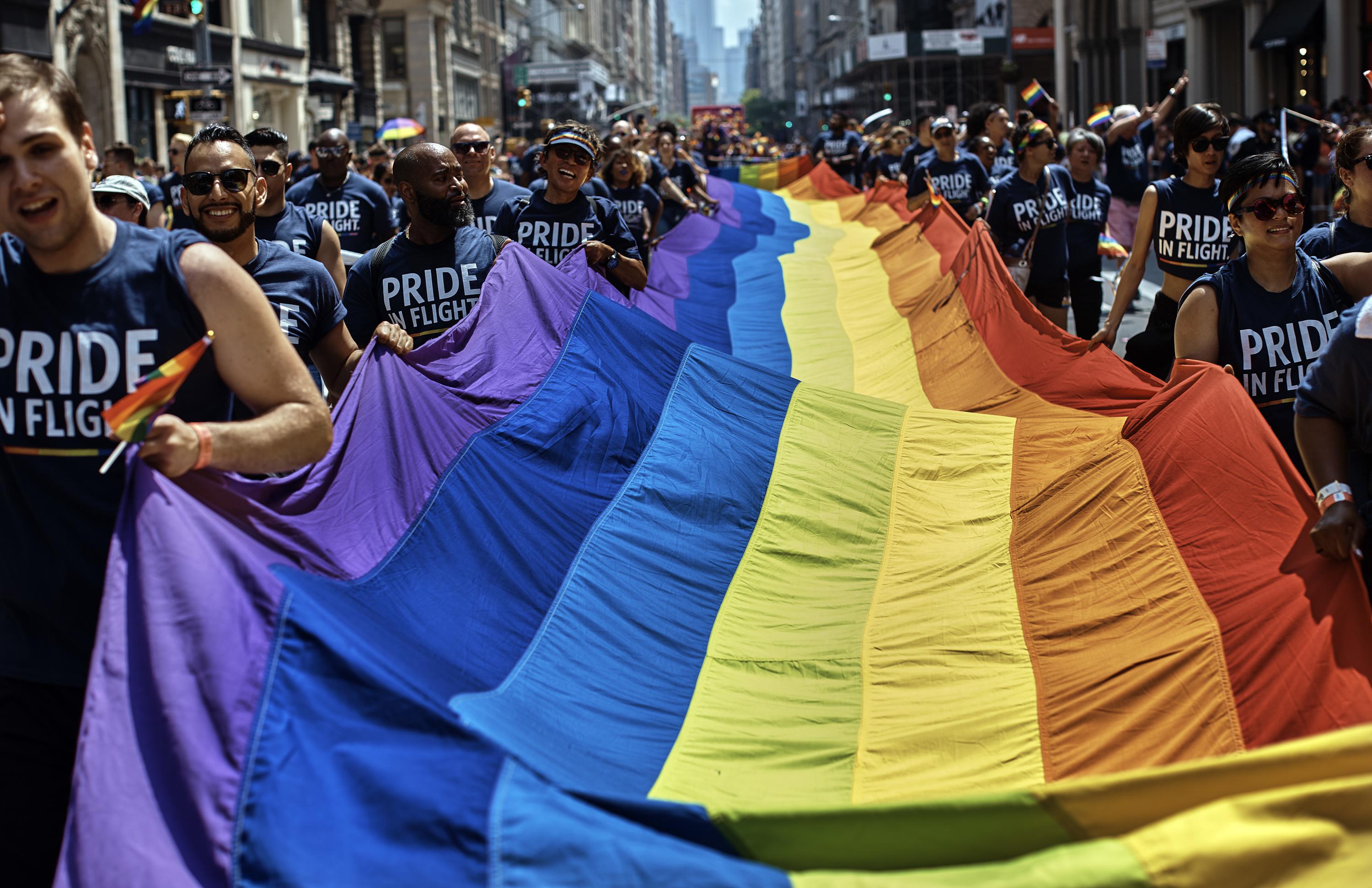