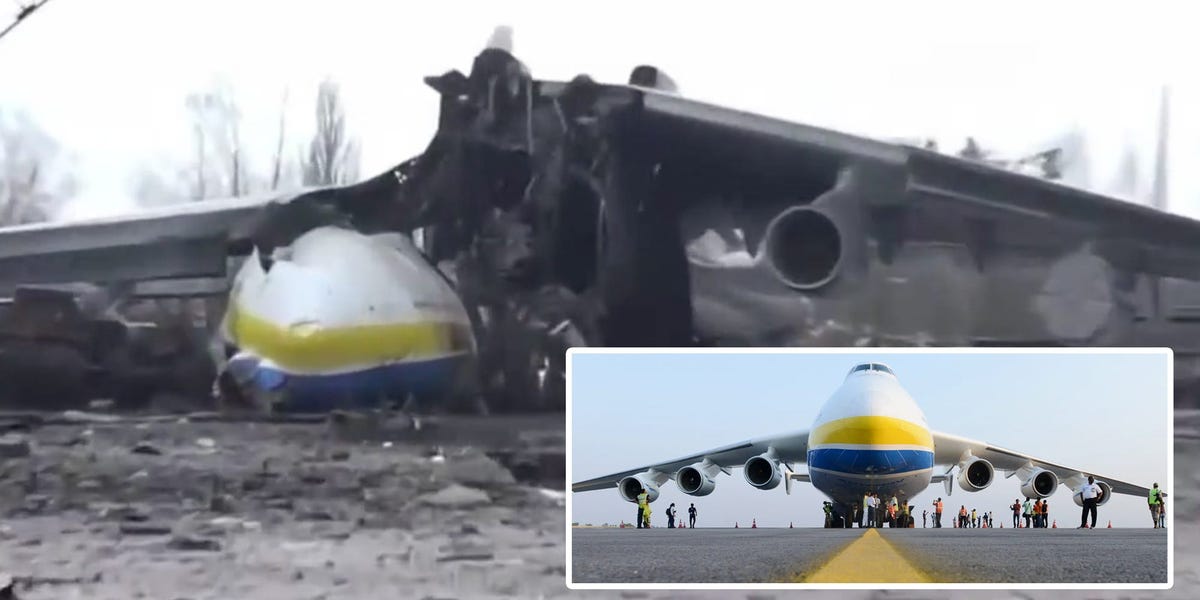 Video broadcast by Russian state TV showed the mangled wreckage of the world’s largest cargo plane, the Antonov AN-225, which was destroyed near Kyiv in Russia’s invasion of Ukraine.

Footage of the ruined Ukrainian jet was shown Friday on Russia’s state-run Channel 1 and from there shared on Western social-media channels. It was not clear whether it was live or pre-recorded.

The plane, also named Mriya, meaning “Dream,” is a point of Ukrainian pride.

The airfield was targeted on the first day of Russia’s invasion of Ukraine, and was captured but quickly retaken by Ukrainian forces, as described in detail by The Wall Street Journal.

The plane was badly damaged that day, The Journal reported. According to Ukraine’s state-owned defense conglomerate Ukroboronprom, it was at the airport for repairs.

Since then it has not been clear who has controlled the airport and when. According to the Channel 1 broadcast, Russian troops were in control at the time of the recording.

Ukroboronprom said on February 27 that the plane had been destroyed, blaming Russia.

“Russia has hit the Mriya as a symbol of Ukraine’s aviation capabilities,” its statement read, calling the AN-225 plane the “flagship of Ukrainian aviation.”

However in the Russian broadcast on Friday, Kuksenkova said it was destroyed by Ukrainian artillery strikes.

Neither Kuksenkova nor Ukroboronprom cited sources or gave evidence for their competing claims.

The Channel 1 images are consistent with an unsourced video, said to be from February 25 or 26, that circulated online in recent days.

The plane was built and operated by Ukroboronprom subsidiary Antonov. The company has yet to respond to the Channel 1 footage of its plane, but did react to the earlier video, writing “NO NO NO NO” in a tweet.

Antonov said it had no direct knowledge of the plane’s condition, and urged people to wait for its announcements on whether it can be restored.

Ukroboronprom, in its announcement, estimated the cost of restoration at $ 3 billion, and said Russia should pay for it.