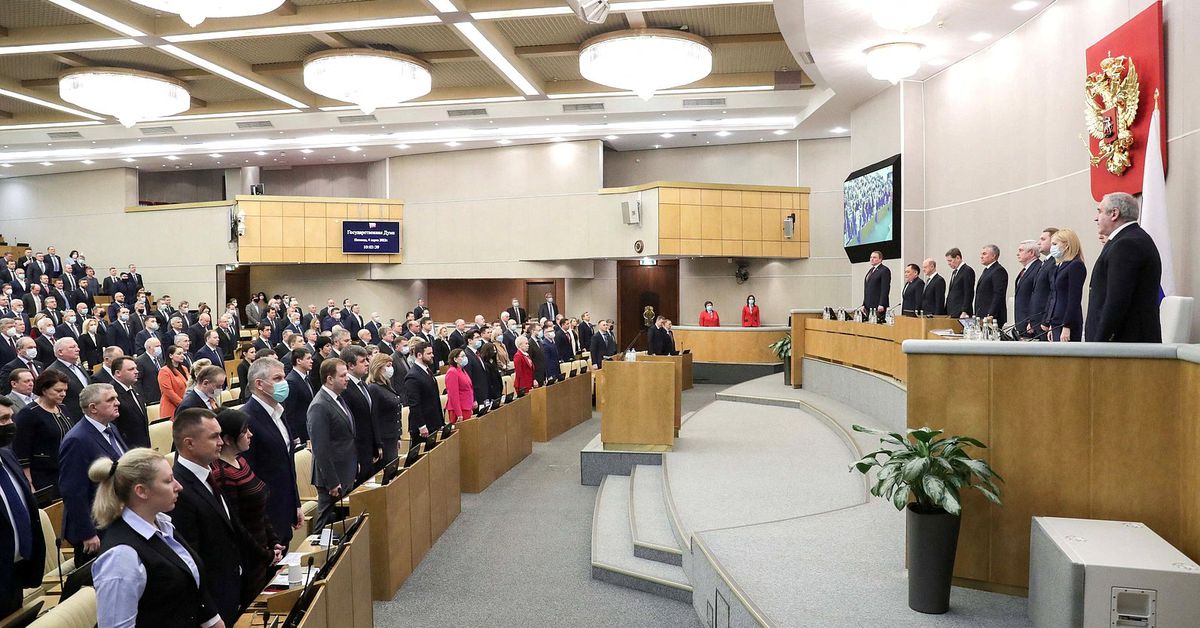 Russian lawmakers attend a session of the State Duma, the lower house of parliament, in Moscow, Russia March 4, 2022. Russian State Duma / Handout via REUTERS ATTENTION EDITORS – THIS IMAGE HAS BEEN SUPPLIED BY A THIRD PARTY. NO RESALES. NO ARCHIVES. MANDATORY CREDIT.

MOSCOW, March 4 (Reuters) – Russia’s parliament on Friday passed a law imposing a jail term of up to 15 years for spreading intentionally “fake” information about the armed forces as Moscow fights back in what it casts as an information war over the conflict in Ukraine.

Russian officials have repeatedly said that false information has been intentionally spread by Russia’s enemies such as the United States and its Western European allies in an attempt to sow discord among the Russian people.

“If the fakes lead to serious consequences then imprisonment of up to 15 years threatens,” the lower house of parliament, known as the Duma in Russian, said in a statement.

The Duma outlined a sliding scale of punishments for anyone deemed to have discredited the armed forces, with stiffer penalties for those who intentionally spread fake information or called for unsanctioned public action.

The amendments, which could not be viewed by Reuters on the Duma’s website, appear to give the Russian state much stronger powers to crack down.

“Literally by tomorrow, this law will force punishment – and very tough punishment – on those who lied and made statements which discredited our armed forces,” said Vyacheslav Volodin, chairman of the Duma.

Russian officials do not use the word “invasion” and say Western media have failed to report on what they cast as the “genocide” of Russian-speaking people in Ukraine.

The amendments have to be approved by the upper house of parliament before going to Putin to be signed into law.

Russian opposition leaders have warned that the Kremlin could crack down on dissent after Putin ordered a special military operation in Ukraine.

Even without the law on fakes, Russia’s communications watchdog has restricted access to the Russian-language websites of the BBC and Radio Liberty for spreading what it cast as false information about the conflict.

Russia has repeatedly complained that Western media organizations offer a partial – and often anti-Russian – view of the world while failing to hold their own leaders to account for devastating foreign wars such as Iraq and corruption.

Western leaders have for years raised concerns about the dominance of state media in Russia and say the freedoms won when the Soviet Union collapsed in 1991 have been rolled back by Putin.

Russia’s RIA news agency said access to the websites of BBC Russian service as well as Radio Liberty and the Meduza media outlet were being limited, citing the media watchdog’s official register.

“Such information is wrong,” Radio Liberty cited the official notice as saying.

Britain’s BBC said access to accurate information was a fundamental human right and it would continue its efforts to make its news available in Russia.

“Access to accurate, independent information is a fundamental human right which should not be denied to the people of Russia, millions of whom rely on BBC News every week,” the BBC said. “We will continue our efforts to make BBC News available in Russia, and across the rest of the world.”