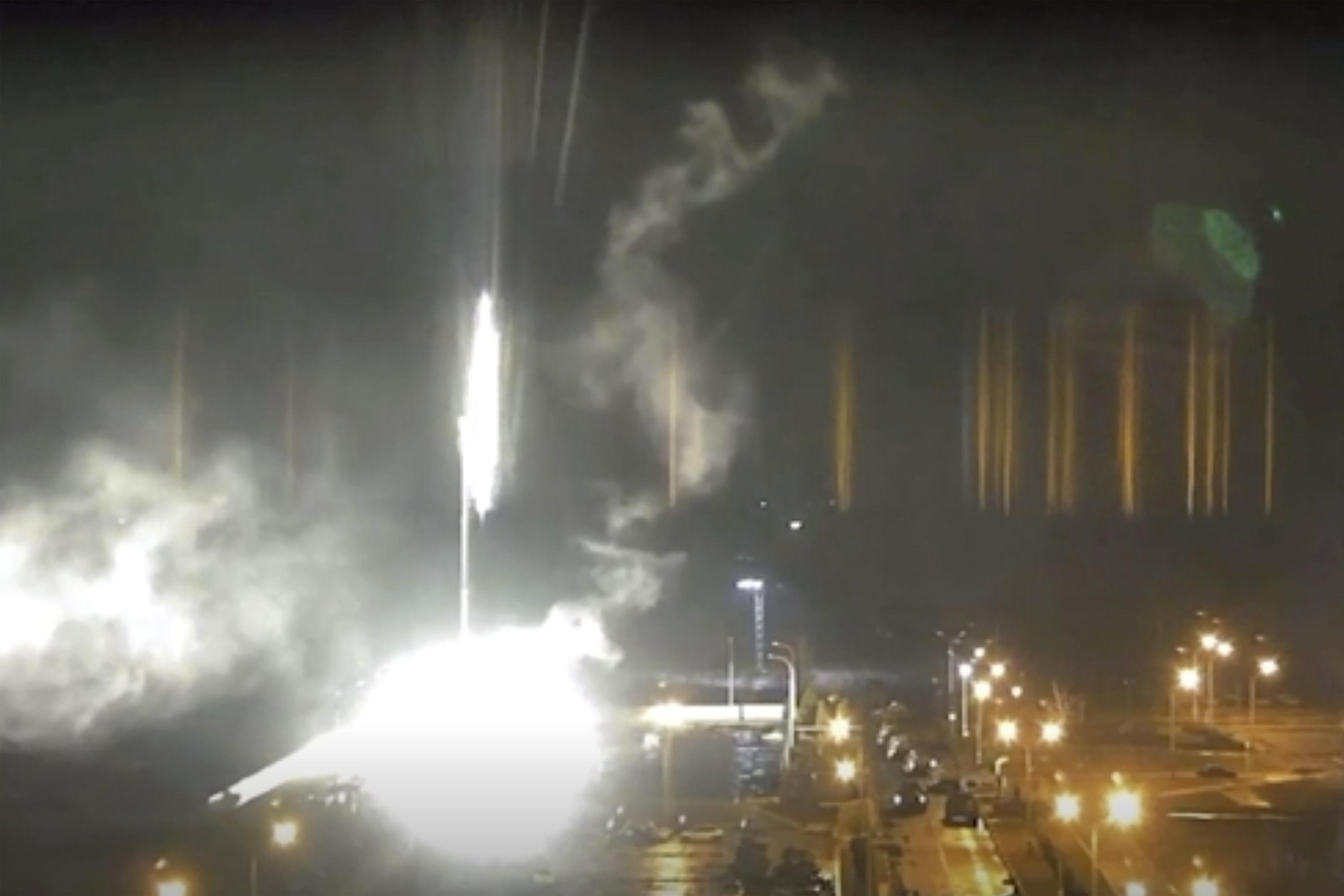 KYIV, Ukraine (AP) – No radiation was released from a Russian attack at Europe’s biggest nuclear power plant in Ukraine and firefighters have extinguished a blaze at the facility, UN and Ukrainian officials said Friday, as Russian forces pressed their campaign to cripple the country despite global condemnation.

The International Atomic Energy Agency’s director-general, Rafael Mariano Grossi, said Friday the building hit by a Russian “projectile” at the Zaporizhzhia plant was “not part of the reactor” but instead a training center at the plant.

Nuclear officials from Sweden to China said no radiation spikes had been reported, as did Grossi. Ukrainian officials have said Russian troops took control of the overall site, but the plant’s staff were continuing to ensure its operations. Grossi said the Ukrainians were in control of the reactor.

In the frenzied initial aftermath when the risk of a radiation release was not clear, the attack caused worldwide concern – and evoked memories of the world’s worst nuclear disaster, at Ukraine’s Chernobyl.

Facing worldwide indignation over the attack, Russia sought to deflect blame. Without producing evidence, Defense Ministry spokesman Igor Konashenkov blamed arson rather than artillery fire. He claimed a Ukrainian “sabotage group” had occupied the training building at the plant, fired on a Russian patrol and set fire to the building as they left.

There had been conflicting reports earlier over which part of the Zaporizhzhia facility had been affected in the attack, with an official saying at one point that shells fell directly on the facility and set fire to a reactor not in operation as well as a training building. Grossi later said that the fire was in the training center.

The confusion itself underscored the dangers of active fighting near a nuclear power plant. It was the second time since the invasion began just over a week ago that concerns about a nuclear accident or a release of radiation materialized, following a battle at Chernobyl.

Grossi said only one reactor of six at Zaporizhzhia is currently operating, at about 60% capacity, and that two people at the site were injured in the fire. Ukraine’s state nuclear plant operator Enerhoatom said three Ukrainian soldiers were killed and two wounded.

The plant fire came as the Russian military advanced on a strategic city on the Dnieper River near where the facility is located, and gained ground in their bid to cut the country off from the sea. That move would deal a severe blow to Ukraine’s economy and could worsen an already dire humanitarian situation.

With the invasion in its second weekanother round of talks between Russia and Ukraine yielded a tentative agreement to set up safe corridors to evacuate citizens and deliver humanitarian aid to the country, overturned by a war that has sent more than 1 million fleeing across the border and countless others sheltering underground. A handful of cities are without heat and at least one is struggling to get food and water.

In the center of the capital, Kyiv, frequent shelling could still be heard Friday, although more distant than in recent days, with loud thudding every 10 minutes resonating over the rooftops.

The West has heaped sanctions on Russia, and most of the world lined up to demand Russia withdraw its troops in a vote in the UN General Assembly this week. In the latest show of international opposition to the invasion, the UN’s top human rights body voted 32-2 on a resolution that would among other things set up a panel of experts to monitor human rights in Ukraine. Only Russia and Eritrea opposed; there were 13 abstentions.

The attack on the nuclear facility led to phone calls between Ukrainian President Volodymyr Zelenskyy and US President Joe Biden and other world leaders. The US Department of Energy activated its nuclear incident response team as a precaution.

British Prime Minister Boris Johnson called for an emergency meeting of the UN Security Council to raise the issue of Russia’s attack on the plant.

In an emotional speech in the middle of the night, Zelenskyy said he feared an explosion that would be “the end for everyone. The end for Europe. The evacuation of Europe. ”

But most experts saw nothing to indicate an impending disaster.

“The real threat to Ukrainian lives continues to be the violent invasion and bombing of their country,” the American Nuclear Society said in a statement.

Russian President Vladimir Putin’s forces have brought their superior firepower to bear over the past few days, launching hundreds of missiles and artillery attacks on cities and other sites around the country and making significant gains in the south.

The Russians announced the capture of the southern city of Kherson, a vital Black Sea port of 280,000, and local Ukrainian officials confirmed the takeover of the government headquarters there, making it the first major city to fall since the invasion began just over a week ago .

A Russian airstrike on Thursday destroyed a power plant in Okhtyrka, leaving the northeastern city without heat or electricity, the head of the region said on Telegram.

“We are trying to figure out how to get people out of the city urgently because in a day the apartment buildings will turn into a cold stone trap without water, light or electricity,” Dmytro Zhyvytskyy said.

Another strategic port, Mariupol on the Azov Sea, was “partially under siege,” and Ukrainian forces are pushing back efforts to surround the city, Ukrainian presidential adviser Oleksiy Arestovich said Friday.

“The humanitarian situation is tense,” he told reporters, adding that Ukrainian authorities are in talks with Russian representatives and international organizations to set up humanitarian corridor to evacuate residents and supply food.

Battles in the area have knocked out the city’s electricity, heat and water systems, as well as most phone service, officials said. Food deliveries to the city were also cut.

Associated Press video from the port city Thursday showed the assault lighting up the darkening sky above deserted streets and medical teams treating civilians, including a 16-year-old boy who could not be saved. The child was playing soccer when he was wounded in the shelling, according to his father, who cradled the boy’s head on the gurney and cried.

Ukraine’s defense minister said Friday that the flagship of its navy has been scuttled at the shipyard where it was undergoing repairs in order to keep it from being seized by Russian forces. Oleksii Reznikov said on Facebook that the commander of the frigate Hetman Sahaidachny decided to flood the ship.

“It is hard to imagine a more difficult decision for a courageous soldier and crew,” Reznikov said.

Ukraine’s state emergency agency issued mass text messages Friday with advice on what to do in case of an explosion: Lie on the ground and cover your head with your hands; use available shelter; do not rush to leave the shelter; help the wounded; do not enter damaged buildings.

Overall, the outnumbered, outgunned Ukrainians have put up stiff resistance, staving off the swift victory that Russia appeared to have expected. But Russia’s seizure of the Crimean Peninsula in 2014 gives it a logistical advantage now in the country’s south, with shorter supply lines that smoothed the offensive there, said a senior US defense official, speaking on condition of anonymity.

Ukrainian leaders called on the people to defend their homeland by cutting down trees, erecting barricades in the cities and attacking enemy columns from the rear. In recent days, authorities have issued weapons to civilians and taught them how to make Molotov cocktails.

As the Russian and Ukrainian negotiators met in Belarus on Thursday, Putin warned in a call with French President Emmanuel Macron that Ukraine must quickly accept the Kremlin’s demand for its “demilitarization” and declare itself neutral, renouncing its bid to join NATO.

The two sides said they tentatively agreed to allow cease-fires in areas designated safe corridors, and that they would seek to work out the necessary details quickly. A Zelenskyy adviser also said a third round of talks will be held early next week.

The Pentagon set up a direct communication link to Russia’s Ministry of Defense earlier this week to avoid the possibility of a miscalculation sparking conflict between Moscow and Washington, according to a US defense official who spoke on condition of anonymity because the link had not been announced.

Karmanau reported from Lviv, Ukraine. Chernov reported from Mariupol, Ukraine. Sergei Grits in Odesa, Ukraine; Francesca Ebel, Josef Federman and Andrew Drake in Kyiv; and other AP journalists from around the world contributed to this report.