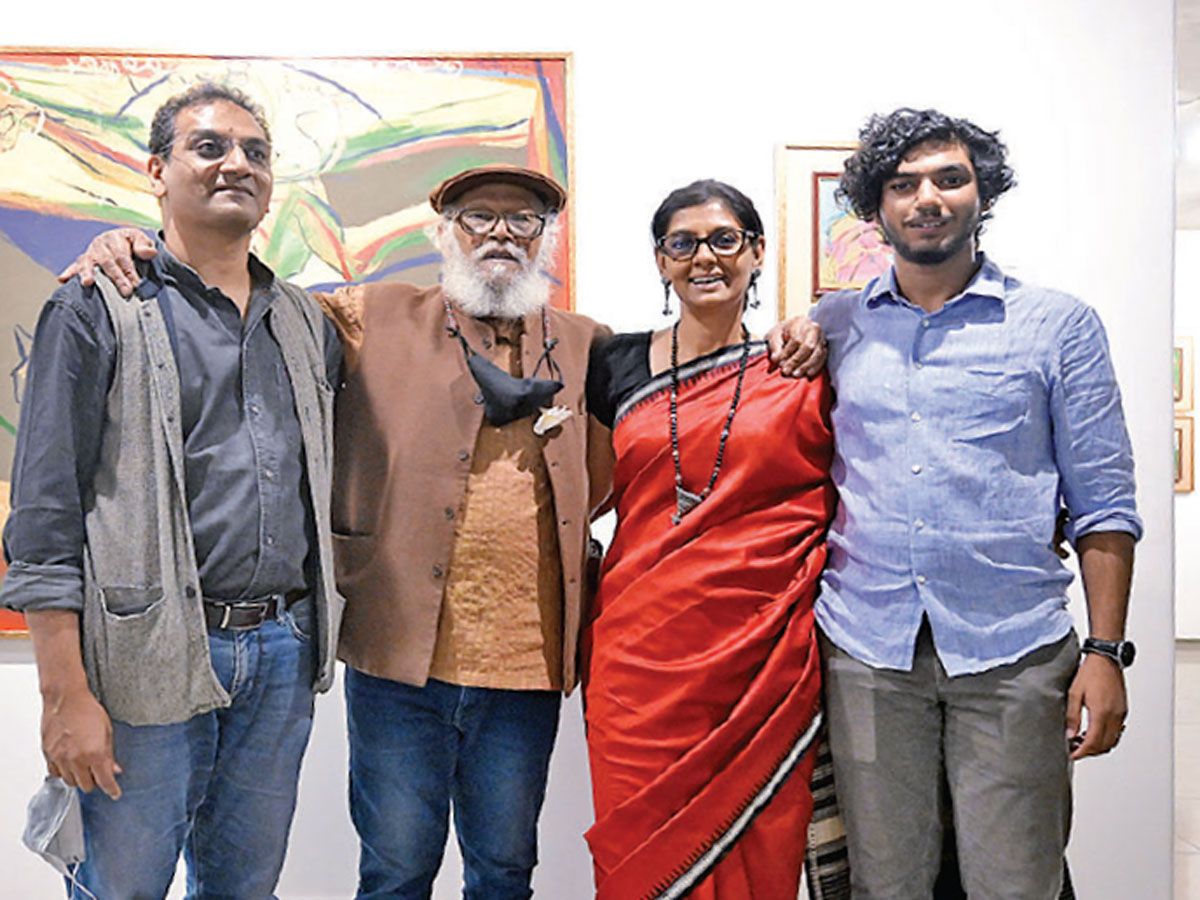 1 / 2
Jatin Das with his children Nandita, Siddhartha and Rehan at the opening 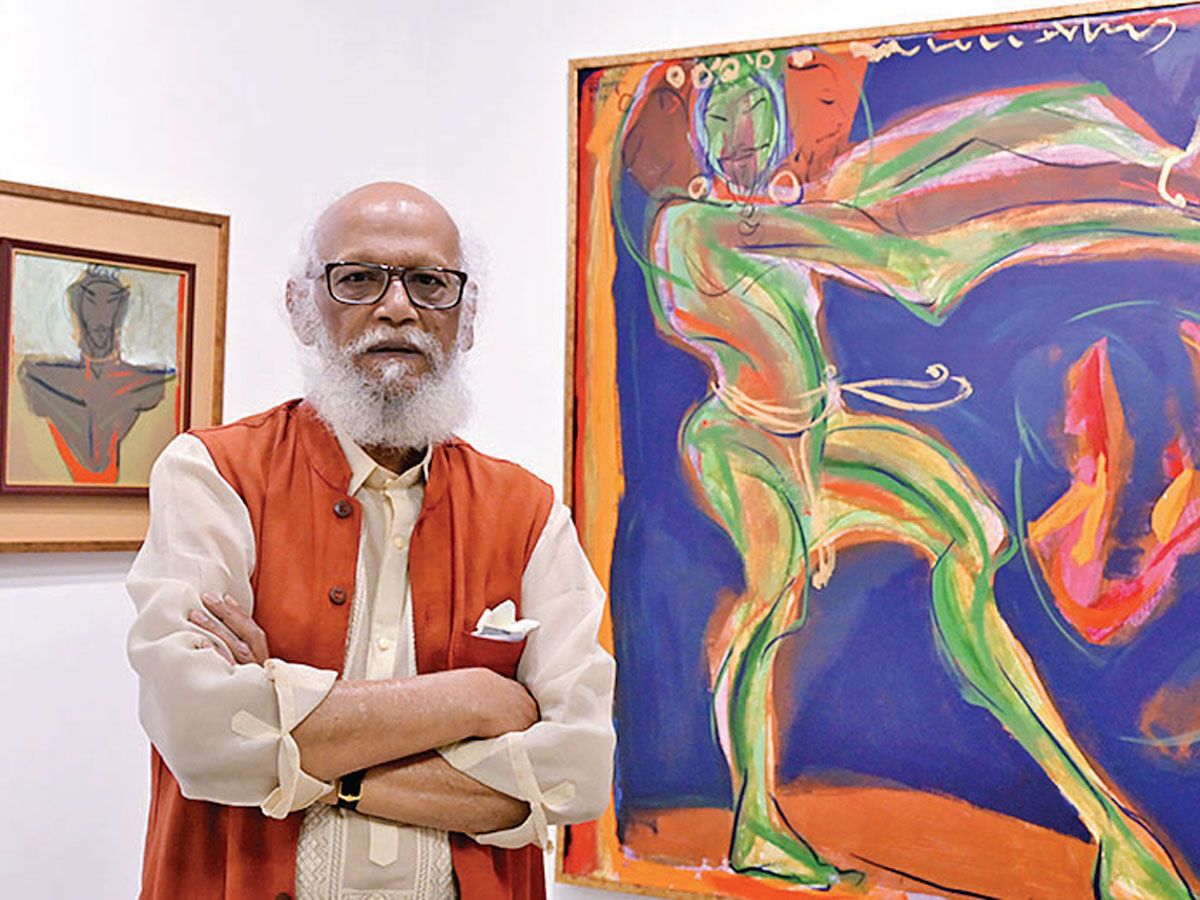 Step into Archer Gallery near Vijay Char Rasta, you will feel like you are entering another realm. Why? Because there are only a few artists who can set the whole community on fire like a moth. And here we are talking about Padma Bhushan Jatin Das, whose works are currently on display in exhibition ‘Prakruti Purush’, the opening of which saw art connoisseurs, artists and art lovers of all kinds – purists, newfangled and awake, veterans, gurus and emerging – who pave a good way to be part of the Das vibe.
Mirror met the artist hours before the official opening, to get a taste of the idea of ​​’Prakruti Purush’ and of course chat with the creator. The artist – who turns 80 on December 2 – presents his works here after almost a decade.
With a body of work – comprising paintings, sculptures and murals – spanning more than four decades, you’d think one of India’s best-known contemporary artists would want to take it easy. Not really. In 2020 itself, when the world was in the grip of the rogue virus, the artist finally made 300-400 ink paintings about the exodus of migrants. “I was in my hometown for most of the lockdown. I was deeply shocked when I watched and read about the exodus of migrants. It prompted me to portray their ordeal on canvas and the series was also featured in an exhibition in New Delhi in February earlier this year,” he recalls.
With Prakruti Purush he has explored the energy of Shiva. “I am always excited and inspired by the free spirit of Shiva. Many of my figurines have Shiva dancing. I am fascinated by the poetic, metaphorical, philosophical and spiritual aspects of the rhythm, the Brahma Rekha figurines”, explains the artist, who works mainly with oil, ink and watercolor.
He adds: “As I continued to draw and paint, the works took the energy of Shiva Shakti. I started to visualize the series about Shiva, as Prakruti and Purush. There cannot be any form unless there is prakruti, it is” Ardhanarishvara’. I was amazed to see an ‘Ardhanarishvara’ sculpture even in Egypt! And one day when someone read aloud the different forms of Shiva, to my surprise they matched the poses I had painted!”
There are over 100 works on display – all created in Ahmedabad while the artist was working on murals for the Adani Corporate at Adani Shantigram in 2019. There are etchings, paintings in various shapes and sizes, acrylic on terracotta, acrylic on board, screen printing on paper, ink on paper, et al.
Never to mince words, the 79-year-old maintains his vision of the current art scene in the country, believing that it is “more about sales than art now”. “I have a feeling that there are great writers, poets and painters in this country, but we are all looking for money, name and making concrete buildings. This was not the culture in our country in the past. I knew most newspaper and magazine editors would come to my show sooner, I had never been to a press person in my life.
“A lot of people these days do things for promotions – I’m not saying I don’t want promotions, but I don’t want to do that by pleasing or by chatting. I’d rather my work do the talking,” says the multiple hyphen. The alum of the Sir JJ School of Fine Arts goes on to talk about his art center in Odisha. “I am making an art center in Bhuvneshwar, not a museum. It was built with donations from all of my artwork. I am almost 80 years old, but I do not have a house of my own, while my contemporaries have eight in several cities. And here I am, creating an art center designed by (architecture doyen)
BV Doshi.”
The veteran signs off, but not before adding that he is looking for someone to translate his book into Gujarati, and that “I have a lot of ongoing projects to complete, so I think this will be my last show in Gujarat now “.

Prakruti Purush is on display at Archer Art Gallery, Vijay Crossroads, until December 11 from 11am to 7pm (closed Sundays).