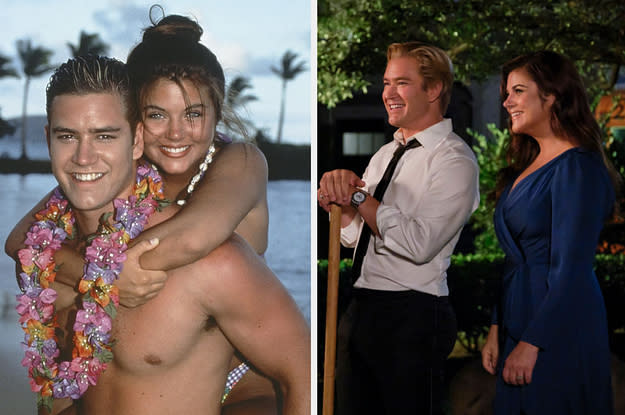 Not so long ago, I was able to contain all my excitement to conduct an interview with Mark-Paul Gosselaar and Tiffani Thiessen. If those names ring a bell, it’s because in the ’90s they played “it couple” Zack Morris and Kelly Kapowski on screen and their roles in Peacock’s hilarious Saved by the bell Restart. We were able to take a journey through memory and reminisce – here’s everything we learned:

DAN — What was your favorite scene or episode from the original? Saved by the bell?

Tiffani Thiessen: It’s hard for me to pick a real favorite. But I have such strong memories of the summer episodes we did at the beach. …I would have to say this was definitely my favorite to film throughout the entire show.Mark Paul Gosselaar: I think we both agree. Because yes, we talked about this in my podcast [Writer’s note: The podcast is called Zack to the Future and you should def give it a listen!] and people always come up to us and ask, “What’s your favorite moment? What’s your favorite scene?” And for us it was work, you know? And people say, “How can you not remember? It was such an important part of your life!” But we were young. And it was work. However, we remember moments that weren’t good… and I think one of the reasons why [Tiffani] and i both feel like we remember the beach episodes because they were from-set. That was on location, it was not in our usual environment. It was like going on an excursion for us. You don’t remember what you did in school, but you do remember your field trips, and the summer episodes were the best field trips for us.

BuzzFeed: Have you saved any of the summer episodes? Like the bathing suits or surfboards? Or something from the series in general?

MG: I wish I was sentimental because the only reason I watch the episodes now it’s because of my podcast. For example, there were those Screech/Dustin Diamond masks that everyone wore and I wish I’d kept one—or like a Bayside T-shirt. There were so many props and I don’t really care about the show.

TT: Got a pair of Levi’s which is nice because the ’90s are back now [laughs]. I actually got the whole cast and crew to sign those jeans… I still have the Letterman jacket we have too.

NOW – Do you have any favorite episodes or scenes from the reboot? Whether it was one you were with or one you watched?

MG: Honestly, the episode I directed. [Writer’s note: The episode in question is Episode 8 of the upcoming season.] There were a few scenes Tiffani and Elizabeth [Berkley Lauren, who reprised her role as Jessie Spano] have at the office and they are great. I was a little nervous putting those two in a room with so much dialogue and not much else, but you two made it. It was so much fun to watch.

THEN – What were some of your favorite off-camera memories?

TT: Mark-Paul and I really need to go abroad! The show premiered in all these different countries, so we got to tour most of the US with the cast, but they let two of us go international. We went to France and Belgium… it was my first time abroad. So the memories of traveling with Mark-Paul – 16 years old and in Europe – and exposing myself to different cultures were so memorable. Those trips fueled my love for the kitchen and the culinary arts.

MG: Totally – may I say this? I’m going to say – me, Tiffani, and my mom got high together in Amsterdam…

TT: Mark-Paul was a total gentleman. He held my hair back as I threw up.

MG: Yes, again, I don’t remember much about the show, but I do remember those experiences. Like, did we get gifted Cartier watches when we were in Paris? We ate a lot of croque-monsieurs and croque-madames. We played a lot of pool…but my favorite part of that trip was when we went to Bordeaux and went down the sand dunes.

TT: I tried escargot for the first time!

MG: We drank really good wine. Like, a lot.

NOW – What was it like reuniting and playing your old characters together? And what about working with the cast?

TT: For me, I got to know the kids and interacted with them a lot more this season as we were all aloof in season 1. I got to know them so much better which was nice because they are really great kids. And they are so professional! They were much more mature and professional than we ever were [laughs].

BuzzFeed: And what about working with Mario and Elizabeth specifically?

TT: Well, most of us have kept in touch. Like, Mark-Paul and I are still very close – our husbands are very close. We actually just went on a trip to Denver together! Same with Mario [Lopez, who reprised his role as Slater] and Elizabeth – I actually think the biggest reunion for me was with Ed [Alonzo, who reprised his role as Max] because I didn’t see him inside year. It sure was nice and sweet to see him since it was so long ago. Also, seeing Lark [Voohries, who reprised her role as Lisa Turtle] was also huge for us. It was really nice to have her back.

MG: Yes, it was great to see Lark and Ed again after all these years. But Mario and I hang out a lot and Elizabeth and I keep in touch – you know, after the show ended we all went our separate ways for a while, but now we’re adults and we all have kids the same age, so that brought us all together again. Plus, social media makes it easier to keep in touch.

THEN/NOW – Do you have a favorite callback/homage that makes the reboot to the original series?

TT: There are SO MANY that you just have to look and discover. But I will say they were very clever with how they sprinkled them in the new series.

THEN NOW – What was your first reaction when you heard that? Saved by the bell got the reboot treatment?

TT: It was different for Mark-Paul and me [laughs]. Will you take this one, Mark-Paul?

MG: Yes, I’ll be diplomatic about the whole thing [laughs]. you know, for year people have been asking if we’d be interested in a reboot, and I think we made it very clear that – you know, after the first run of the series and making sure we didn’t get typecast – we all had a great experience, but we couldn’t wrap our heads all the way around a project that would celebrate the original while also feeling organic. Like, we had fun with Fallon, and replaying those characters, but coming up with writing and plot lines that were smarter and funnier? We were excited, but nothing viable came to our desks. So when Tracy Wiegfield got attached, we all got excited — and for her to figure out what she was doing… I mean, after that first pitch meeting, I was on board. It blew me away. What Tracy did with this IP was beyond anything I could have ever imagined.

THEN/NOW – In the reboot, Zack and Kelly are married and have their son Mac, but where did you see your characters end up prior to the reboot?

TT: I’ll be honest, I don’t think I thought about it much [laughs]. But I will say, it certainly makes sense that they are still married. I’m not scared of that. l ben shocked that they only had one child. I expected…more [laughs].

Thank you so much for chatting with us, Mark-Paul and Tiffani! Make sure to see this iconic duo in season 2 of Saved by the bell, streaming now on Peacock!