About 50 Queensland police officers and staff have taken their fight for a Covid-19 vaccine mandate to the Industrial Relations Commission, claiming the directive is invalid.

More than 55 police and staff members have been suspended for failing to comply with Commissioner Katarina Carroll’s directive on 17,200 in force to have jabs.

In September, Carroll-instructed staff received at least one vaccination shot before October 4 and another dose before January 24.

But attorney Thomas Allan – representing 39 officers and 10 employees – told the Queensland Industrial Relations Commission on Thursday that Carroll did not comply with certified agreements and the appropriate award, failed to consult with the directive and made a directive that went beyond her. powers.

More than 55 police and staff members have been suspended for failing to comply with Commissioner Katarina Carroll’s directive on 17,200 in force to get jabs (pictured, officers at an environmental protest in Brisbane in October)

SHOULD POLICE BE VACCINATED AGAINST COVID?

Three of the applicants testified at the Industrial Relations Commission hearing, which was attended by about 50 people on Thursday.

The court also heard from Deputy Commissioner Douglas Smith, who said that prior hearing before the directive included a meeting of five unions on 1 September.

Police Commissioner’s Legal Representative James Murdoch QC said during the hearing that it would be ‘stupid’ to suggest that the organization could consult with thousands of employees individually or without trade unions.

Asked whether there had been an increase in staff with concerns about their well-being since the directive, Smith said a number had raised welfare issues in the exemption process. 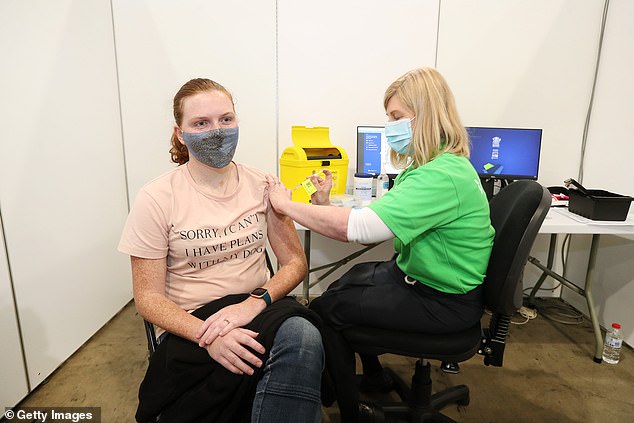 Legal representatives in this case will discuss whether the court has jurisdiction over mandatory vaccines at a two-day court hearing next week (pictured, a woman being vaccinated in Brisbane)

Mr Murdoch also called an infectious disease specialist, Dr Dr Redmond, who said vaccination was intended to prevent the onset of the disease or the development of a serious manifestation of the disease.

The Queensland Police Union has joined the government in responding to the actions of officers and staff, who have received more than $ 122,000 in support through crowdfunding.

‘We are not for or against the vaccine – this is not a pro- or anti-vaccine issue,’ reads a GoFundMe page.

‘It’s a question of whether our employers, on behalf of the government, can authorize civilian conscription and disrupt the relationship between a patient and their doctor by imposing a vaccine.’

Carroll said earlier that any employee who did not meet the deadline would be suspended for a week with pay and then asked to show the reason why they should not be suspended without pay.

Under the direction of the police, exceptions may be granted for health or religious reasons or in special circumstances.

Police said they are working on internal records to identify members who had not received at least one COVID-19 vaccination and do not have an approved exemption.

On Wednesday, the 36 officers and 24 employees had been suspended, but since then, an officer and an employee had followed the instructions and had their suspension suspended, a spokesman said. 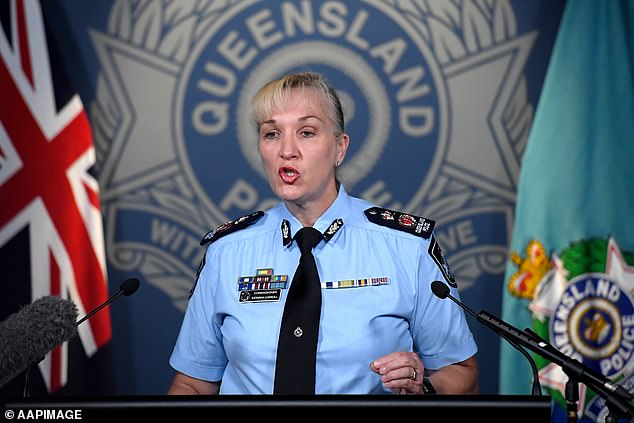 In September, Queensland Police Commissioner Katarina Carroll (pictured) instructed staff at least one vaccination shot by October 4 and another dose by January 24.

A total of 438 staff had not yet officially registered their vaccinations in accordance with the Commissioner’s instructions.

‘Most of them are not in the workplace due to a variety of reasons, including maternity leave, pre-retirement leave and leave due to medical issues,’ the spokesman told AAP on Thursday.

It appeared that there had been no significant change in the rate of resignation, as the police were unable to disclose a specific number of members who had been stopped due to the vaccine mandate.

Legal representatives in this case will discuss whether the court has jurisdiction over mandatory vaccines in a two-day hearing next week.

Officers behind the legal challenge are fighting in a direction that they say ‘impairs, affects or removes their fundamental common law rights’.

During a hearing in the Brisbane Supreme Court earlier this week, Judge Jean Dalton extended a suspension of the mandate for the workers who are applicants in the case.

The Commission’s full bench is expected to deliver its decision within a week.